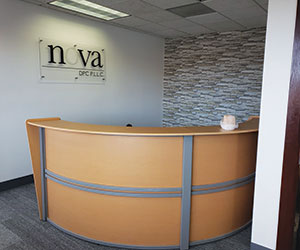 Drs. Matthew Falkiewicz and Nicholas Blank picked out furniture and did some painting themselves to save money on the new office. Courtesy Nova Direct Primary Care

Sort of like “concierge medicine for less money,” Blank said, the model is a modern way to return health care to the days before health insurance when patients paid physicians directly, and decisions about care were made between physicians and patients alone.

Since then, they said the “middleman” health insurance companies and the overhead they create have caused costs to soar.

“Lack of actual health care kind of led us into this route,” Falkiewicz said. “It just lets you be more active in your patient’s care, lets you actually work for your patient rather than work for an insurance company.”

For now, most health insurance policies do not cover direct primary care.

The model is not an insurance replacement, they said, but allows patients to cover their own basic services and use medical insurance for hospital services and emergencies, the way they think it should be used.

If other insurances operated the same way as health insurance, Blank said the costs of those services would increase. He said the main reason why a simple office visit can be so expensive is because of all the accompanying paperwork needed.

They said the goal with Nova is to provide health care that is accessible, affordable and transparent.

“In my mind, none of those three things are available at an insurance-based practice,” Falkiewicz said.

With a cap of about 600 patients for each doctor, compared to typically about 2,500, they said the goal is to offer 24/7 personalized service and same-day appointments, and they plan to offer telemedicine and even house calls.

College students can subscribe for $200 per semester or $500 per year, with a $35 enrollment fee.

They believe the model could work well for a small business with up to 20 or 30 people. Businesses with five or more employees can subscribe for $50 per member per month with no enrollment fee.

Some primary care services included in the cost are laceration repair, skin biopsy and skin lesion removal, abscess drainage, EKG, Pap smear and wart treatment. There is a pathology fee of $75.

Patients will be able to purchase many medications directly from the office’s stock, at a 3 percent markup from wholesale prices.

Blank said they are working with some local independent specialists to whom they can refer patients.

“Direct primary care is all about networking and finding other people who would be willing to offer all-inclusive services,” Falkiewicz said.

While they said patients should discuss their plans with advisers, they would recommend their patients have a low-level insurance plan for hospital services.

Blank said their ideal patient would be someone with a chronic illness — such as high blood pressure or diabetes — who pays high premiums but likely never meets the deductible.

“If you’re someone who’s never going to hit that deductible, you’re just spending tons of extra money for no reason,” Blank said.

They know they may not be the right fit for everyone, Falkiewicz said. Staying in the system is the best option for some people, Blank said, and it would be more difficult to accommodate some patients with costly medications or the need to see specialists often.

They have two female medical assistants to help with the practice, but, at least to start, they plan to run the business themselves, contracting companies for some HR services. They even strived to open the business in the most financially efficient way possible, buying much of the furniture secondhand and painting the walls themselves.

As members of the Grand Rapids Area Chamber of Commerce, they are planning a grand opening and ribbon cutting in the next few months.

In the meantime, they said they are working to spread the word about the practice and are happy to meet with interested clients to further explain the model and help them decide if it’s best for them.

Including Nova, there are three direct primary care practices in the Grand Rapids area and two in the Kalamazoo area, among less than two dozen in the state, according to DPC Frontier, an organization founded by doctor and lawyer Philip Eskew to “advance the DPC movement.”