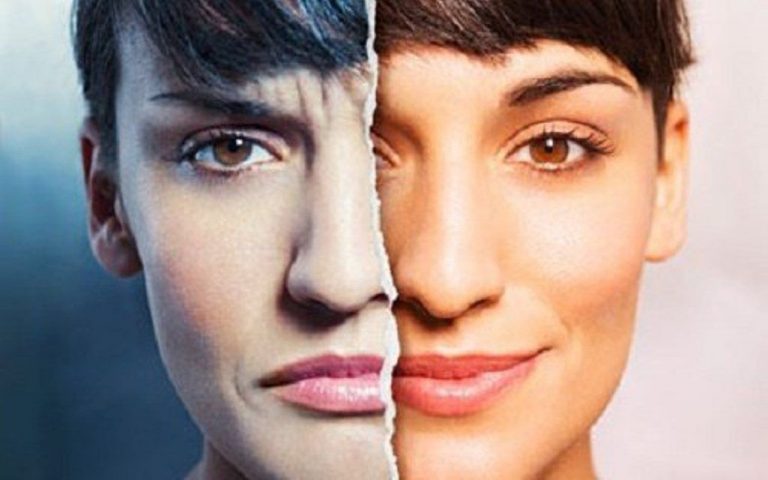 Emotions: Our Main Obstacle to Health and Destiny
Desires and passions are considered by Chinese thinkers to be the main obstacles to the true accomplishment of a human life and the fulfillment of one’s destiny. They are considered in Chinese medicine as the main cause of illness and of weakness leading to diseases.

(Emotions According To The Huangdi Neijing, an excellent lecture by Elisabeth Rochat, French scholar of Daoist classics and acupuncturist www.elisabeth-rochat.com/. She presented this paper at the 44th Rothenburg Conference of Traditional Chinese Medicine in 2013. Ms. Rochat synthesizes brilliantly the relationship between emotions and disease, often forgotten or misunderstood in Western medicine. Images and editing by Jane Barthelemy.)

Emotions are Ruled by a Quiet Heart
Our emotions must be ruled by a self-contained strength, which comes from the depths of the individual nature. An empty and quiet Heart, a clear awareness, allows for perfect behavior and an authentic relation with Heaven. It produces regular movements of Qi and good health in body, mind and spirit.

The Heart is the Emperor, Ruler of the Kingdom
The Heart is our emotional, intellectual, mental and spiritual life. It is everything that happens within us and through which we feel our existence. It is our ability to think, to develop knowledge, awareness, consciousness, and to cultivate our inner reality in order to build our vital spirit (jing shen 精神). The Heart is what allows a human being to take responsibility for her life and destiny, to know how to nurture life according to the natural order.

Otherwise, there is disorder, disease and premature death. Therefore the Heart is responsible ultimately for the correct or incorrect order in the movements of Qi within oneself.

Ms. Rochat’s talk is based on the wisdom of the Huangdi Neijing, earliest known medical textbook, written by the Chinese Yellow Emperor and his physician Qi Bo in the 26th century BCE.

What is the Source of Emotions?
Emotions are the reactions we have when we are in contact with something exterior (a being, an object, an event, etc.), or when we recall the memory of it. “By nature (xing 性), man possesses blood and Qi (xue Qi 氣) and a Heart that allows knowledge (xin zhi 知). Grief, joy, elation, or anger do not exist permanently within him; they are reactive movements to the incitement of objects. It is then that the art of the Heart (xin shu 術) operates.” (Liji, Yueji)

Emotions Are Reactions to Something External
Emotions are therefore activated by an exterior object or event and the immediate reaction is induced, which modulates into multiple possibilities such as attraction or repulsion, love or fear, elation or anger, sadness or joy, arrogance, envy, etc.

Reactions Depend on Individual Tendencies
The reaction to something depends on one’s natural disposition, on each individual’s own nature as well as on the way one is true to one’s nature in the moment of the reaction, and therefore on the natural order. The nature of the reaction tells whether the desire in the Heart is turned towards the development of life or towards what is in conflict with it. Hence the variations of meaning of the most commonly used Chinese character for emotions (Qing 情): natural dispositions, tendencies, emotions, passions.

Appropriate Emotions Cause No Disorder
If the desires are in accordance with the natural order, if the reactions are appropriate, then one governs oneself appropriately (zhi 治) and there is no disorder (luan 亂). This is following the right order, following nature and one’s own nature, according to circumstances; this is fulfilling one’s destiny (ming 命) (See footnote 1) The art of the Heart (xin shu 術) ensures the appropriate reactions through the diminishing of the desires that lead one away from the natural order. 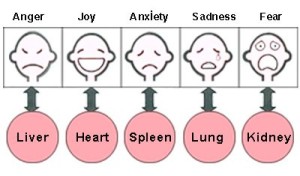 Emotions are Movements of Qi
Each emotion increases exceedingly a particular quality and activity of the Qi in a human being. During the classical era, all the movements of Qi were analyzed, characterized and classified through the theory of Yin/Yang and the Five elements.

Emotions are Expressions of Qi in the Organs
Each of the Five Zang organs is therefore related to an emotion that is fundamentally the expression of the movement of Qi belonging to the same element. Coming from the depth of the organ, this Qi influences everything under its control within the human being, in the physiology and the psychology, in the working of the body, as well as in the working of the mind.

The Cycle of Emotions Begins in the Liver
The Liver provides a surge and sets off upward movements as Wood does. This Qi movement called nu 怒 is first an impetuous surge, which promotes a rising movement. The excitement of this movement, of the Liver (or of Wood), turns it into anger, which is only the excess of it. Thus the Five wills (wu zhi 五志), which are deep propensities and tensions of vitality in each of the Five Zang organs, become the Seven emotions (Qi Qing 七情), which are a disorder of the regular movement of Qi which produces life. (Anger, Excessive Joy, Thinking-Worry, Grief, Anxiety, Fear, Fright)

Therefore the emotions originate in the Five Zang organs, which are the receptacles of the Spirits under different modalities. All of our mental faculties and psychological balance, even the way we react to anything, including what stirs emotions and releases passions, depend entirely of the state of the Five Zang, united by and in the Heart.

What Happens when an Organ is Disturbed by Emotion?
When a Zang organ is disturbed, it not only brings out physical and psychological symptoms related to the specific disturbance, but the person suffers an alteration in one’s ability to perceive, to know accurately, to judge without passion, to feel, to react appropriately.

If the Five organs rely on a Heart free of passion and attachment, working under a spiritual light (or spiritual intelligence, shen ming 神明) and keep this reliance, there is no excess. The Heart and the spirit (shen 神) inspire each of them to their core. These are the Five spirits (wu shen 五神), the fivefold expression of the spirits in a human being, enlightening the functioning of the mind. 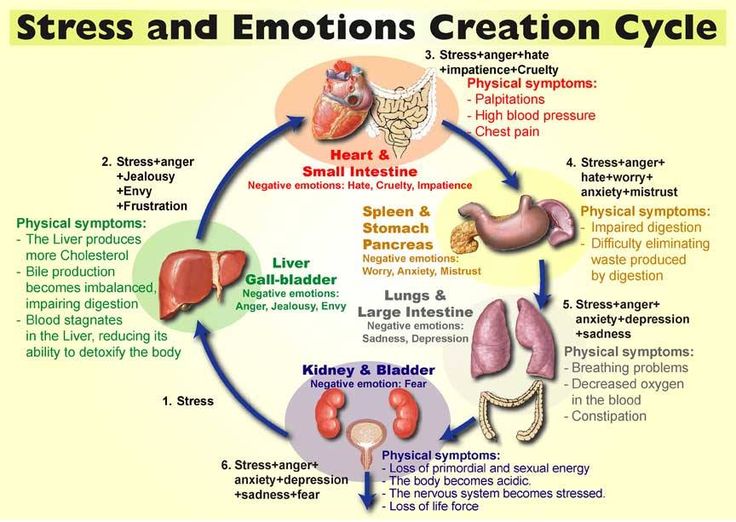 When an organ loses its rooting in the spirits, its Qi no longer flows correctly and it disrupts the psychological and physiological functioning. Suwen chapter 39 describes these disruptions well:

One Organ Can Injure Another
Each of the Five Zang organs is affected by its emotion, but one emotion may injure several organs by bringing disorder in their own movement of Qi. Therefore, one organ may be injured by different emotions. Since one organ can be injured with or after another, the disturbance in the interaction of the Qi changes, and consequently one emotion can transform itself in another one.

Emotional State –> Deviated Qi –>Physical Disease
That is the complexity of the interplay between the Five movements of Qi on the pattern of the Five elements with all the effects on the functioning of the body and of the mind. All levels of the being communicate continuously, therefore any emotional disruption will have physiological repercussions (in the areas ruled by the organ responsible for the emotion as well as in the areas ruled by other organs disturbed by this disorder).

Deviated Qi –> Physical Disease –> Emotional State
Conversely, a deviated movement of Qi leads to physiological disruptions, and also to an emotional state. This state may only be short-lived, as a reflection of the condition of the Qi and its movement during that period. Or it may derive from the disruption of an organ that reaches complete disorder and therefore is no longer able to control the movement of its Qi, can no longer take part in the harmonious composition of the center, nor in the balance of the psychological and mental aspects. We call this disease.

Footnote 1) Destiny means individual life as it unfolds according to its natural/heavenly origin. To fulfill one’s destiny is to live in harmony with the cosmos, to remain integrated with universal harmony. To act as such provides the deepest fulfillment of one’s natural gifts as well as the most perfect health possible.