Did John Brennan Expose His Role During the 2016 Elections? 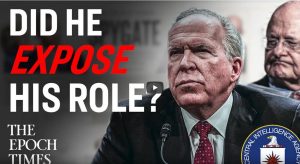 Did John Brennan Expose His Role During the 2016 Elections?

Did John Brennan expose his role during the 2016 elections? That’s what we’ll discuss on this episode of Declassified. If you’re new here and have not subscribed please consider doing so. The role played by the CIA during the 2016 investigation into the Trump campaign is increasingly receiving attention as ranking member of the House Intelligence Committee Devin Nunes (R-Calif.) says he is “laser-focused” on uncovering what the CIA provided to the FBI as part of the ‘Crossfire Hurricane’ probe. “In 2016, we know from great work that Trey Gowdy did at the time … that the CIA gave information over to the FBI in 2016,” Nunes told Fox News in an interview. “We now are laser-focused on that. We need to know: Exactly what did the CIA give to the FBI in 2016? That’s what our investigation is now focusing on.” Based on publicly available information, including statements from the man himself, then CIA Director John Brennan, under President Barack Obama, appears to have played a key role in establishing the FBI’s counterintelligence investigation into the Trump campaign—including making repeated use of questionable foreign intelligence during the period leading up to the 2016 presidential election. Brennan, in Congressional testimony and media interviews, has provided significant insight into his own actions and those of the CIA in connection with the investigation of the Trump campaign, including the obtaining of foreign intelligence on members of the Trump campaign. Original article: https://www.theepochtimes.com/brennan… Written by Jeff Carlson