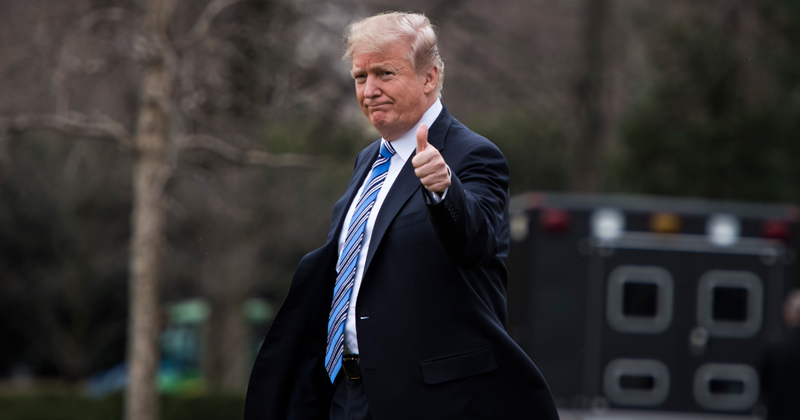 WASHINGTON, D.C. – The Director of National Intelligence (DNI) together with the Department of Homeland Security (DHS) and the FBI are planning to publish in March a study of the 2016 elections that will demonstrate massive Democratic Party voter fraud of a magnitude sufficient to have influenced election outcomes.

On Jan. 3, 2018, President Trump signed an executive order disbanding the Presidential Advisory Commission on Election Integrity, largely because states controlled by the Democrats refused to cooperate.

Many Democrats breathed a sigh of relief, thinking President Trump had given up his effort to uncover and correct the decades of Democratic Party voter fraud.

Little noticed was a provision in the executive order that tasked the Department of Homeland Security to review the presidential commission’s initial findings and to determine next courses of action.

Equally unnoticed by the mainstream media were news releases on Feb. 15 from the DNI and from DHS that briefings were being held with election officials in all 50 states on Feb. 16 and Feb. 18 to inform them of the initial conclusions of their on-going investigation into voting fraud during the 2016 election.

The outcomes of the DNI, DHS, and FBI investigations are expected to be disastrous for the Democratic Party, revealing precisely why Democratic-controlled states refused to cooperate with Trump’s presidential commission.

When Special Counsel Robert Mueller indicated last Friday some 13 Russians for trolling the Internet as the only evidence of “Russian Collusion” he could find after months of investigation that spent millions of dollars in taxpayer funds, the intelligence operative known as QAnon posted a preview of the DNI, DHS, and FBI conclusions. 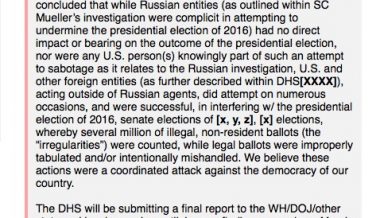 That comes close to sounding the death knell for the “Russian Collusion” mainstream media hysteria we have endured since the 2016 election as a Democratic Party “hate-Trump” narrative for impeachment.

Next, QAnon makes clear the DNI, DHS, and FBI study will prove massive Democratic Party voter fraud, including the allowing of several millions of illegal immigrants to vote in direct contradiction of voting laws across the country.

QAnon wrote the following, apparently citing the DNI, DHS, and FBI study to be released next month:

In an effort to preserve the integrity of all U.S. elections, as ordered by the President of the United States, after an extensive investigation in select counties (the ‘sampling’), the DHS has concluded that while Russian entities (as outlined in Special Counselor Mueller’s investigation were complicit in attempting to undermine the presidential election of 2016) had no direct impact or bearing on the outcome of the presidential election, nor were any U.S. person(s) knowingly part of such an attempt to sabotage as it relates to the Russian investigation …

… U.S. and other foreign entities (as further described within DHS (XXXX), acting outside of Russian agents, did attempt on numerous occasions, and were successful, in interfering w/ the presidential elections of 2016, Senate elections of [x, y, and z], [x] elections, whereby several million of illegal, non-resident ballots (the “irregularities”) were counted, while legal ballots were improperly tabulated and/or intentionally mishandled.  We believe these actions were a coordinated attack against the democracy of our country.

The QAnon post goes on to note the DHS will be submitting a final report to the White House, to the Department of Justice, and to other state and local agencies outlining findings next month.

The post further suggests that while the DNI, DHS, FBI study was limited to a sampling of 22 counties, the findings were so conclusive that a countrywide examination is mandated.

While these conclusions spell the likelihood of criminal investigations of voter fraud to be undertaken nationwide, the shocking results also suggest we will soon see massive changes to voter laws that will most likely include Voter ID requirements and an end to electronic voting machines that can be hacked such that results tabulated can be rigged.

The redactions avoid naming the Senate races that were altered by voter fraud, but most likely we may see some Senators either forced to undergo new elections or possibly to lose their seats illegally gained.

When the DHS final report is available in March, we should experience a “game-changing” moment in which the Democratic Party accusations of “Russian Collusion” are buried as Deep State propaganda and lies, to be replaced by a genuine recognition of what appears to be a developing truth, namely that for decades the Democratic Party has engaged in a clandestine policy of systematic and intentional voter fraud designed to prejudice election results in their favor.