In this new interview with Captain Deryl Zeleny, Royal Canadian Air Force (retired), we cover the latest series of events in Deryl’s campaign to reveal to the world the corrupt nature of the Canadian banking/court/police mortgage foreclosure machine. This interview first summarises Deryl’s story to date and picks up the story from Tuesday 30th May 2013 when a removals team, including a representative a from a company purported to be the manager of properties foreclosed on by the Bank of Canada.

Deryl had returned to his property to protect it and his possessions, as he had discovered that deliberate theft of heavy equipment by agents acting for the bank as is his right in Canada had occurred. When he asked the property managers to leave on the basis they were trespassing on his property for unlawful purposes, the police were called and arrested Deryl.

That began a 3 night, four day battle of nerves as the Crown Solicitors tried to impose unlawful sanctions to stifle Deryl’s ability to communicate this incident to his wide audience which includes the military. The initial charge of trespass which should have resulted in a ticket and a brief visit to the police station, magically became a criminal charge of forcible entry at the request of the Bank of Canada.

In order to be bailed out the Crown stipulated that a surety (guarantor) had agree to supervise Deryl and that he not be allowed to publish, use the internet, telephone or communicate with his “followers”. (You mean the one people?) He spent three nights in three different facilities as they feared “crowds” might gather. Deryl rejected all attempts to gag his communications as part of the bail terms and when his surety pointed out to the last solicitor that they were attempting to politically censor Deryl, the Crown capitulated and removed the communications bans. He was released from Quinte Detention Centre, Ontario on Friday 3rd May 2013. The details are in the interview. 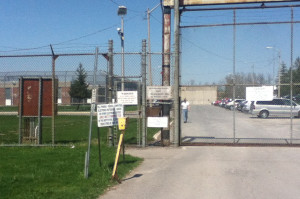 Here is a picture of Deryl walking to the gate of the Quinte Detention Centre, Ontario, after his release.

The story is not yet over, as the charge that the bank had forced on Deryl, may well backfire on them in court…watch this space.

Once again we thank Deryl for his incredible commitment to bringing an end to corruption. We will be organising email flash mobs in support of Deryl and will continue to follow his journey. Please keep a look out for them.

Thanks to all the listeners and readers for your support too!