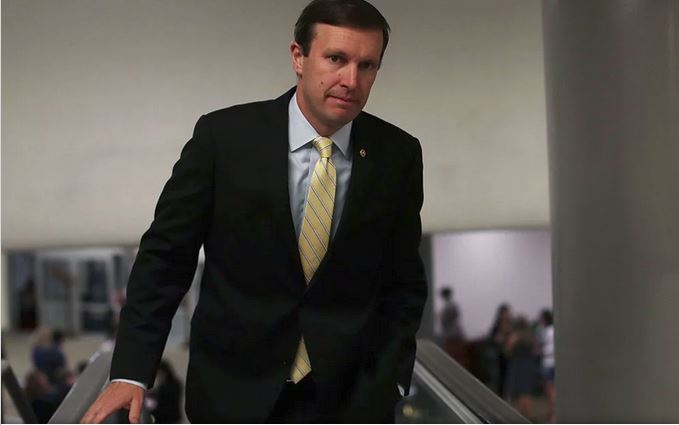 Sen. Chris Murphy of Connecticut and other Democratic senators had a secret meeting with Iranian Foreign Minister Mohammad Javad Zarif during the Munich Security Conference last week, according to a source briefed by the French delegation to the conference. Murphy’s office did not respond to repeated requests for comment by press time.

Such a meeting would mean Murphy had done the type of secret coordination with foreign leaders to potentially undermine the U.S. government that he accused Trump officials of doing as they prepared for Trump’s administration. In February 2017, Murphy demanded investigations of National Security Advisor Mike Flynn because he had a phone call with his counterpart-to-be in Russia.

“Any effort to undermine our nation’s foreign policy – even during a transition period – may be illegal and must be taken seriously,” Murphy said in 2017 after anonymous leaks of Flynn’s phone call with Russian ambassador Sergey Kisylak were published. He also strongly criticized the open letter some Republican senators sent Iranian leaders during the Obama administration’s campaign for a nuclear agreement.

However, Murphy has previously defended rogue meetings if they’re done by Democrats such as former Secretary of State John Kerry.

“Unless it was authorized by the president or secretary of state, conducting independent foreign policy sends mixed signals to our adversaries,” said Christian Whiton, former State Department senior advisor in the Trump and George W. Bush administrations. “It seems very unpalatable. If we want to talk to Iranians, they know how to reach us and they don’t need to go through an intermediary.”

The Munich Security Conference, an annual forum on international security policy, welcomes hundreds of world leaders each February. This year’s conference featured robust debate on the United States’ maximum pressure policy against Iran, China’s handling of the coronavirus and technology concerns, and the European alliance with the United States. Other Democrat senators at the conference included Sens. Robert Menendez of New Jersey and Chris Van Hollen of Maryland. Former Sen. John Kerry of Massachusetts also attended.

President Donald Trump has reoriented American policy in the Middle East away from President Barack Obama’s friendly posture toward Iran. He departed from Obama’s Joint Comprehensive Plan of Action, a nuclear arrangement with the Republic of Iran that was not ratified by the United States Senate.

Trump has exerted instead a “maximum pressure” campaign against the regime, with 12 demands on Iran before a new deal is reached. Those demands include a full account of its nuclear program, ending its proliferation of ballistic missiles, releasing all U.S. citizens held on spurious charges, ending support to terrorist groups, withdrawal of forces in Syria, and cessation of its threatening behavior against its neighbors.

The “maximum pressure” campaign of sanctions has devastated the Iranian economy, which is in recession and faces rising inflation. It has made it difficult for Iran to pay foreign fighters engaged in supported terror operations. Iranians have taken to the streets in protest.

Iran recently killed an American contractor in Iraq and the United States killed Iranian general Qassim Suleimani, a top Iranian leader who was responsible for the killing and maiming of thousands of U.S. soldiers. Iran’s retaliatory strike for that killing resulted in no U.S. deaths, but the country did shoot down a Ukrainian passenger plane then lied about it for days.

At the conference, Zarif said official retaliation for the killing of Suleimani had ended, although he suggested independent attacks from others in the country might follow.

Murphy is a frequent speaker at the National Iranian American Council, a lobbying group with alleged links to the Islamic Republic of Iran. Republican Sens. Mike Braun of Indiana, Tom Cotton of Arkansas, and Ted Cruz of Texas recently asked the Department of Justice for potential violations of the Foreign Agents Registration Act.

They wrote that the influential lobbying group “purports to improve understanding between American and Iranian people but in reality seems to spread propaganda and lobby on behalf of the Iranian government.” Evidence indicates that evidence Zarif himself was involved in founding the group.

Mollie Ziegler Hemingway is a senior editor at The Federalist. She is Senior Journalism Fellow at Hillsdale College and a Fox News contributor. Follow her on Twitter at @mzhemingway
Photo Alex Wong