#DeepStateUnmasked: IRS Officials “You Should Give Increased Scrutiny” to Conservatives 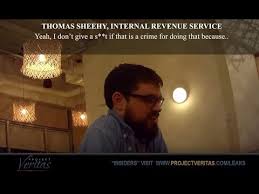 #DeepStateUnmasked: IRS Officials “You Should Give Increased Scrutiny” to Conservatives

Officials at the IRS in Austin and DC spill the beans about the 2013 IRS Lois Lerner scandal, targeting conservative non-profits, celebrating potentially illegal activity, and admit “mistakes were made.”

UPDATE: Sep 25, 2018, 2:36 PM | Project Veritas attorney Ben Barr submitted this complaint to the Department of Justice regarding the findings of this investigation.

IRS Tax Examiner: Target Conservative Groups Because They Are “… just f***ing fronts for the Koch brothers.”

Deleting IRS Emails is “… so cool… [conservatives] could not hold any evidence against… ” Former IRS Commissioner John Koskinen “…I don’t give a s**t if that is a crime.”

IRS Attorney on Lerner Scandal: “All that stuff we saw in the news, yeah mistakes were made.”

IRS is Comfy Gig, Democratic Socialist of America Gets “… a lot of paid time off and sick days” to Use for Activism

Contempt for America: “Unfortunately, I am not allowed by the bylaws of my union to go against the Constitution.”

(Washington DC) Project Veritas has released the fourth story in a series of undercover reports which unmask the Deep State. This report features two Internal Revenue Service (IRS) officials who candidly discuss the IRS’s unfair treatment of conservative non-profit groups. The two officials in the report are Thomas Sheehy, an IRS tax examiner and member of the Austin Democratic Socialists of America in Texas, and Jerry Semasek, an IRS attorney in Washington, DC.

The Austin Democratic Socialists of America is a socialist group that works to advance ‘progressive issues’ in Austin, Texas.

SHEEHY: “John Koskinen. He got a lot of flak for giving increased scrutiny to these Tea Party groups. Conservatives got really mad at him, he was so cool though because he deleted all the emails, so they could not hold any evidence against him.”

SHEEHY: “Yeah, I don’t give a s**t if that is a crime for doing that because… you should give increased scrutiny to those groups because a lot of them are just f***ing fronts for the Koch brothers or whatever.”

In a separate meeting, attorney Semasek discloses to Project Veritas multiple times that “mistakes were made,” during the 2013 scandal when conservative non-profits were targeted when applying for tax-exempt status.

SEMASEK: “… you know what, for what it’s worth, on the record, I know people in Tax Exempt Government Entities. All that stuff we saw in the news, yeah mistakes were made”

Attorney Semasek, who worked for the IRS during the 2013 scandal, continued:

SEMASEK: “… The law requires that an organization can’t be political, it can’t be partisan to be tax exempt… Those employees in Cincinnati Ohio started to separate them and put them in a pile. And it turns out that they were like the Tea Party group of people. And I think they did, like Lois Lerner and maybe some of her employees were more liberal leaning or Democrats so I don’t know if they disallowed them, but they required them to produce more documentation to try to prove that they weren’t partisan.”

He repeated that mistakes were made:

Sheehy, like individuals featured in the previous reports in this series, is also a member of a political activist group. Sheehy implies that he abuses his work benefits, including paid time off and sick days in order to engage in socialist activism for Austin Democratic Socialists of America.

SHEEHY: “I will say, I just really like the benefits. I get a lot of paid time off and sick days. So, like, for DSA stuff, I can just honestly… I will just stay late for a period. So, I will just call in for the next day.”

SHEEHY: “I mean, as long as like the manager doesn’t find out and you don’t explicitly say “hey I’m calling in sick to do Democratic Socialist of America work” then I mean like yeah. You know, you just gotta, you just gotta like sort of manage, you know, when and where you’re like doing, like, the work you do.”

Sheehy reveals there are more socialist activists at the IRS, referring to a friend of his who works on national communications for the Democratic Socialists of America, as well as writing bylaws for the political organization.

SHEEHY: “My friend Chris, like he does a lot of like tech stuff. He even runs the f**kin’, I was looking over his shoulder once at the electoral forum and I noticed that he actually is on the national social media working group. So, he helps run the national twitter account. He also runs our local twitter account. He also is one that does all the bylaws and stuff…. he also works for the IRS.”

Sheehy remarks about his disdain for the Constitution of the United States.

SHEEHY: “Unfortunately, I am not allowed by the bylaws of my union to go against the constitution.”

This is the fourth release in a series Project Veritas began publishing in September 2018 unmasking corrupt actors in the federal government. Project Veritas will publish more undercover video of federal employees shedding light on the Deep State resistance.

“As our deep state investigation continues to unfold, four government agencies have responded resulting in the removal of two federal employees from their job duties. Stay tuned to see which Government Agency we unmask next.“