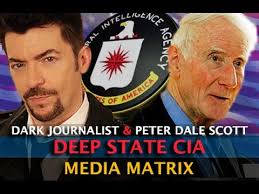 Professor of the Deep State
In this fascinating Part 1 episode Dark Journalist Daniel Liszt Interviews Deep Politics author, Former Canadian Diplomat and UC Berkeley Professor Peter Dale Scott. Professor Scott has been writing on the covert political system for 50 years, including his seminal and controversial works Deep Politics and the Death of JFK, The Road to 9/11, and American War Machine. His most recent groundbreaking book, The American Deep State, exposes the truth about covert forces that constitute an unelected, unaccountable, shadow system of political power.

Covert Political System
The “Deep State,” is a concept Professor Scott identified as a covert political system of private contractors for US intelligence agencies, media conglomerates, Wall Street interests and Big Oil funding, which together manufacture “Deep Events”, such as 9/11, the JFK assassination and their subsequent coverups, for motives of profit and control.

New McCarthyism of the Media
This shadow system has gone into overdrive since the election of President Trump and has attempted to manage the public narrative with controlled CIA leaks aimed at destabilizing the Trump administration. At the same time the Corporate Media has gone on the assault against the rising popularity of Alternative Media and is attempting to subvert the competition by applying the Orwellian term ‘Fake News’ to dispose of their media enemies.

This recent, almost hysterical reaction to their loss of influence, evident in the election of 2016, finds them even going so far as to accuse popular political websites of being connected with the Kremlin in some way and by creating discredited lists of alt journalists with supposed ‘Russian Connections.’ Their objectives in trying to reinvent a New McCarthyism seems to be aimed at achieving a new Cold War II with Russia to satisfy the financiers of the Military Industrial Complex and to further inflate the already bloated Defense Budget.

CIA Drug Running
Professor Scott takes a wide angle lens and pulls no punches in his research on the involvement of the intelligence agencies in the flow of profits from the drug trade and their extra constitutional efforts to destabilize other countries when they don’t fall in line with the objectives of a hijacked American Foreign policy. He reveals the influence of Wall Street on public policy, Big Oil Companies skirting the laws with congressional help and Military Contractors fueling a worldwide arms trade to make huge profits while peddling illegal political influence.

Media Says The Deep State Doesn’t Exist
Professor Scott observes that the Mainstream Media in their battle with President Trump, has become concerned that this theme of the Deep State, which is widely circulated in the Alternative Media, may become well understood by the general public. To stop this momentum they are waging a counter attack by using headlines in the Washington Post and New York Times to try and debunk that the Deep State even exists! This relentless campaign of disinformation is a joint effort by the CIA and the media to thwart the rise of awareness due to the internet and other factors that see their control slipping away. Professor Scott also discusses his concerns that these forces may resort to a False Flag Deep Event to regain control that they have temporarily lost at the ballot box.