Deconstructing the Media: The Observer 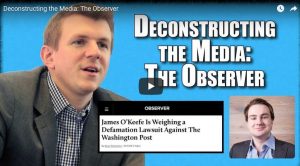 Deconstructing the Media: The Observer

On February 2, 2018, The Observer published an article headlined “James O’Keefe is Weighing a Defamation Lawsuit Against The Washington Post.” The article contained a wildly incorrect statement about O’Keefe presented as fact. James called Davis Richardson, the article’s author to see why he printed that line. The article was subsequently corrected. Deconstructing the Media is a new Project Veritas video series where James O’Keefe analyzes what journalists report and explains the factors that cause malicious and erroneous reporting.