Dave Janda – Voter Fraud Before, During & After the Midterm Elections 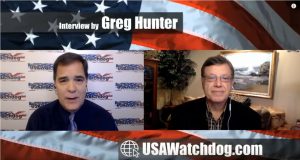 Dave Janda – Voter Fraud Before, During & After the Midterm Elections

Radio host Dr. Dave Janda says the midterm elections are far from over. Janda says, “There was voter fraud before, during and after the midterm elections. My sources say there was a staggering amount of voting machines that were impounded Monday night before the election on Tuesday because they had pre-set votes in them. This involved voting machines in all 50 states. . . . Trump had teams out there making sure of the integrity of the vote. That is just some of the voter fraud before the elections. . . . There are a lot of federal officials on the ground. . . . I think this is going to go by the way of the Jill Stein recount event.” Meaning, massive voter fraud will be uncovered in multiple locations across America. Join Greg Hunter as he goes One-on-One with Dr. Dave Janda from Operation Freedom.

All links can be found on USAWatchdog.com: https://usawatchdog.com/donations/