BZ: Newsweek is blocking this content now, but you can find on the web archive here

This article was originally published on The Conversation. Read the original article.

Dark matter and dark energy are mysterious, unknown substances that are thought to make up more than 96 percent of the universe. While we may have never directly seen them, they beautifully explain how stars and galaxies move and how the universe is expanding. But a new study, published in The Astrophysical Journal, suggests they may not exist after all.

I have taught astronomy and astrophysics classes at various universities around the globe, and few topics spark as much excitement as dark matter and dark energy.

An introductory lecture on the subject will typically begin by looking at a pie chart of the mass and energy density of the universe. This demonstrates that, at the present day, regular atoms like hydrogen and helium make up only a few per cent of the universe.

Approximately one quarter of the pie chart is dark matter. In brief, this is a form of matter that only seems to interact through gravitation. Several strands of evidence lend support to the existence of this form of matter. For example, we can see a gravitational pull of galaxy clusters and other structures in the universe. We know that the matter in such structures isn’t enough to hold them together by gravity alone, meaning some additional invisible matter must be present to make them spin at the speeds observed.

Embarrassingly, the largest part of the pie chart is dark energy. This is a type of energy, or field, that causes an anti-gravity force on the universe itself—pushing it apart. Another way of thinking about it is that dark energy exerts a negative pressure. Rather than the universe just expanding at a constant rate, the expansion is accelerating as a consequence of dark energy.

We can tell that the universe is expanding in this way by looking at how fast galaxies move away from each other. And I have personally been involved in tests of dark energy, such as the WiggleZ survey. In this, our team measured the effect of dark energy using a novel “standard ruler�? technique, which can estimate distances in the cosmos. This lead to the conclusion that dark energy is real. 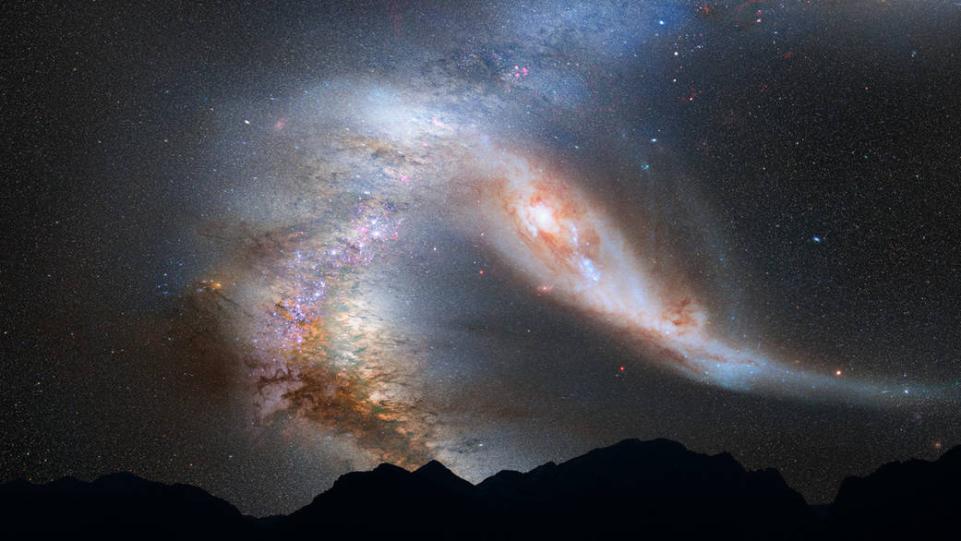 Suppose for a moment that both dark energy and dark matter are too strange a pill to swallow. What would the alternatives be? One way out would be to suppose that our understanding of the universe is at fault. Perhaps gravity and general relativity do not work in quite the way that we think they do.

In the same way that Newton’s laws—which we long thought told the whole story about movement—are a simplification of the more complicated theory of relativity, perhaps our understanding of relativity is a simplification of something else? More fundamentally, perhaps we have made some error of judgement about the assumptions that underpin the equations we deal with? Maybe we need to modify the equations of gravitation?

The new study by André Maeder, an honorary astronomy professor at the University of Geneva, centers around something called “scale invariance.” Scale invariance means that the properties of a given law of physics (or set of physical objects) do not change, even if we were to multiply their lengths or energies by some number. They are the same, independent of scale. As an example of a very specific type of scale invariance, think of a fractal. Even if we zoom in by some set magnification, the shape of the fractal will remain the same. Example of a fractal. Created by Wolfgang Beyer with the program Ultra Fractal 3. Wolfgangbeyer

We could treat empty space itself as having this quality. In other words, empty space still has the properties of empty space, even if we zoom in or out—and its properties do not change if it’s squashed or stretched. What Maeder finds is that if we treat empty space as being scale invariant, there may be no need for dark matter or dark energy at all.

This is different from what Einstein suggested—that empty space operates based on what’s known as the cosmological constant, which is a form of dark energy. Space under these circumstances cannot be scale invariant in the same way. Many scientists implicitly and explicitly assume this is the correct description. Yet this means that dark energy and dark matter are still required and therefore new physics is needed to explain them.

Putting theory to the test

Excitingly, Maeder’s theory is testable. For example, we can observationally determine the rotation speed of galaxies and compare the data to the predictions made by his model of empty space. We can even examine the motion of galaxies inside clusters of galaxies to test if there is agreement with the model proposed.

Scientists only proposed dark matter to explain how galaxies and galaxy clusters move due to a gravitational pull. But what if space itself could make them move in this way? Thus far, the tests that Maeder describes are in agreement with the observations made.

However, there are many more tests that need to be run, Maeder has only investigated two galaxy clusters. And let’s not forget the huge body of work suggesting that dark matter and dark energy do exist. Yet it is tantalising that, if the hypotheses that Maeder has put forward are correct, then it points to a large revision of our ideas about cosmology.

While we are not there yet, ultimately, the pie chart of mass and energy density of the entire universe may need to be revisited to scrub out the two biggest parts! It’s an exciting time to be a cosmologist.

Kevin Pimbblet is a senior lecturer in physics at the University of Hull.