Damage Limitation: Calls for ‘Managed End’ to Euro as Italy Teeters on the Brink

Damage Limitation: Calls for ‘Managed End’ to Euro as Italy Teeters on the Brink 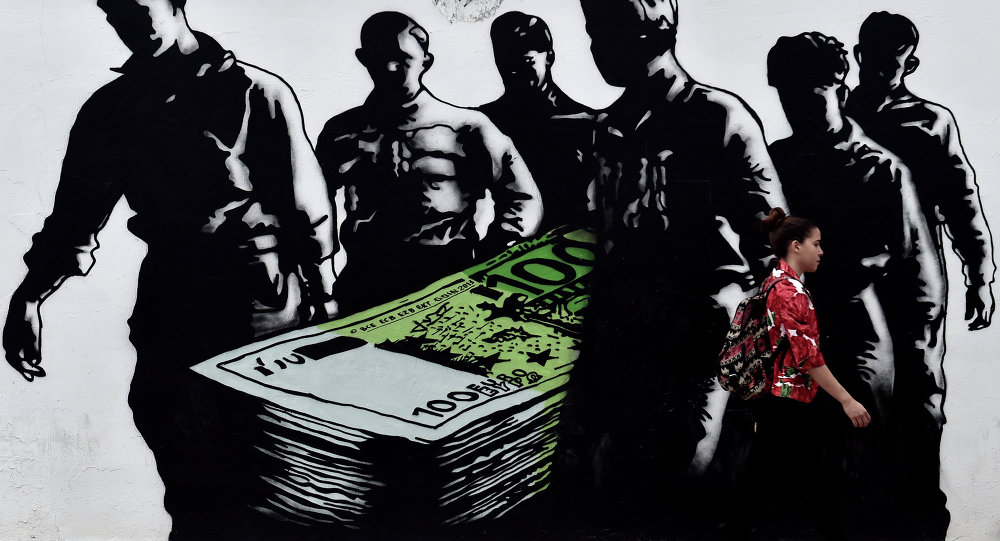 The increasing debate in Italy about the merits of “Italexit” is a reflection of the unresolvable difficulties that face the eurozone, financial expert Marc Friedrich told Sputnik Deutschland.

The possibility of Italy’s exit from the eurozone has bas been raised in the Italian Parliament, as politicians try to come up with ways to tackle Italy’s spiraling public debt, which reached 132.6 percent of GDP in 2016.

In early July, Italian parliamentarians from the Five Star Movement held a seminar in the Chamber of Deputies to discuss Italy’s economic situation. They discussed the eurozone’s default mechanism, strategies to restructure sovereign debt, parallel payment systems as well as the possibility of leaving the eurozone.

The debate signified the first time that the Italian Parliament discussed the “Italexit” option, a topic which had been “taboo” until recently, the Italian press reported.

Financial expert Marc Friedrich told Sputnik Deutschland that a return to the lira would benefit Italy, which is struggling like never before with record high levels of debt and unemployment.

“The countries of southern Europe would be a lot better off with a sovereign currency than with the euro,” Friedrich said.

“These countries will never see shoots of recovery while they are in the eurozone and the interest rate limitations set by the European Central Bank (ECB). We wrote this as early as 2012 in our first book, ‘Der groesste Raubzug der Geschichte,’ (The Greatest Robbery in History). We see that the euro does not work. That is why I can only emphasize that Alberto Bagnai of the University of Pescara is right.”

In March, economics professor Alberto Bagnai called for a controlled end to the euro, arguing, “No matter how much political capital is invested in it, the euro will fall.”

“The most likely cause will be a collapse of the Italian banking system, which will take the German one with it. It is in the interest of any political power, certainly of the declining European leaders, and probably also of the US, to manage this event rather than passively await it,” Bagnai wrote on his Goofynomics blog.Like Bagnai, Friedrich is calling for “damage minimization” of the end to the euro.

“The only thing we are experiencing right now is a delay to bankruptcy and a worsening situation for most ordinary people. What we are doing is actually damage maximization, where we should now be minimizing the damage.”

“The longer Italy and other southern European countries are controlled by the ECB and imprisoned by the euro, the greater the collateral damage to their prosperity, social coexistence, and, of course, democracy, because extreme parties are getting stronger and stronger,” Friedrich warned.

As the third-largest economy in the eurozone, an unmanaged “Italexit” would have a catastrophic “tsunami” effect on the European economy, leading other countries to exit in its wake, the economist says. If Italy remains in the EU, then the bloc’s strongest economy, Germany, will have to shoulder the burden of sending subsidies to Italy and other southern eurozone member states.

Such a situation contradicts the rules of the single currency and the ECB’s asset purchase program, which is currently pumping 60 billion euros ($70 billion) per month into the eurozone system, is just papering over the cracks, Friedrich said.

“When the euro was created, it was said that no country should have to pay for another country. All these laws have been and are being broken from the top, and no one is punished for it. The euro is doomed, it’s a currency on borrowed time. In actual fact, the euro is fake money. The euro will fail, the only question is when. The ECB is only trying to string it out for as long as possible.”

“It’s going to collapse and we can only hope that the politicians who are responsible will now try to minimize the damage and ‘archive’ the euro in a controlled way. In any case, it will be expensive. If we are unlucky, there will be huge disaster with a lot of collateral damage and a lot of people will lose money,” Friedrich warned.

Friedrich’s misgivings about the euro are shared by London School of Economics and Political Science professor Paul De Grauwe, who told the Austrian newspaper Der Standard earlier this month that the single currency can’t succeed without a political and budgetary union to accompany it.

“Germany and Italy are both problems for the eurozone in their own way. I’ve just come from Italy, there is huge pessimism there. It is the only country in the monetary union that is poorer today than when the euro was introduced in 1999. Growth was zero or negative, people can’t find jobs. They are stuck in a disaster. There is a great temptation that they will fall behind a leader who tells them that it will be better without the euro,” De Grauwe said.

“Italy’s system does not work well in the eurozone, it has had a long cycle of inflation, strong wage increases and then a crisis and depreciation. This is no longer possible, they have not adapted to the euro.”