Dakota Access Pipeline: Thousands of veterans are heading to Standing Rock to stand in solidarity with protesters

Dakota Access Pipeline: Thousands of veterans are heading to Standing Rock to stand in solidarity with protesters

by Rachael Revesz, published on The Independent, on November 28, 2016 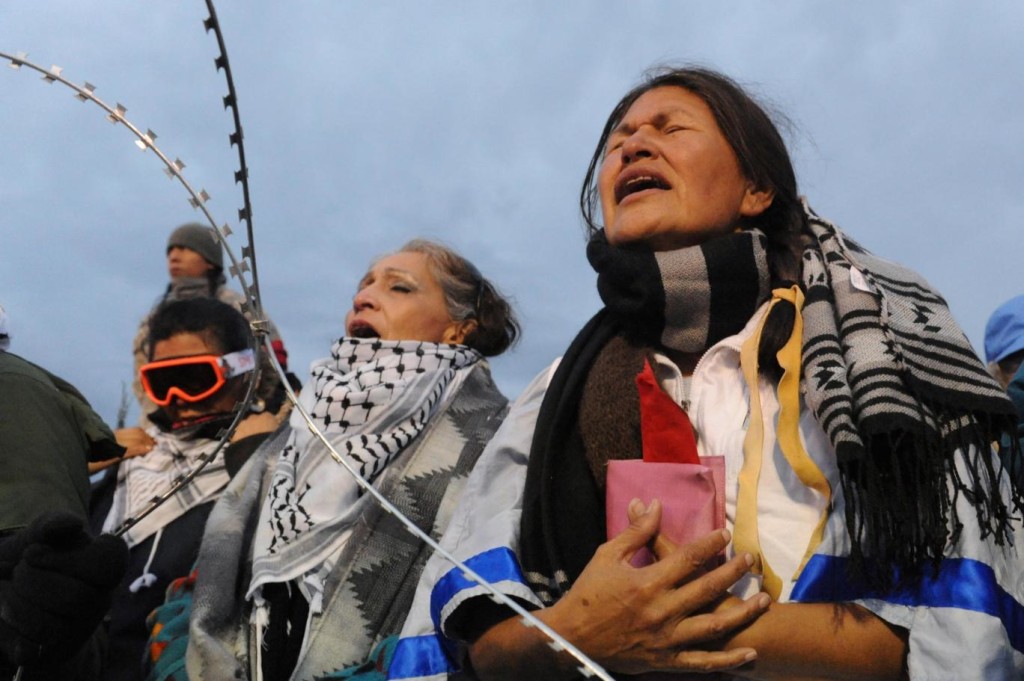 The event organisers have asked veterans to bring body armour and gas masks, but leave weapons at home Reuters

The day before the US Army Corps of Engineers plans to close camps in North Dakota, as many as 2,000 military veterans are expected to stand in solidarity with the Native Americans and the protesters who have endured months of extreme weather, pepper spray, water cannons, as well as alleged use of grenades by police. Protests were mostly peaceful until they turned violent in late November.

The event, Veterans for Standing Rock, is calling for participants to “assemble as a peaceful, unarmed militia” to stand against protesters being assaulted and intimidated by law enforcement.

A gofundme online fundraising page for the veterans has gathered close to $490,000 in just over two weeks.

“It’s time to display that honor, courage and commitment we claim to represent,” the page reads, adding that 2,100 veterans want to join the event but the event reached capacity at 2,000 people.

“It’s time for real patriots. Now more than ever, it’s time for anyone and everyone to lead.”

The day after Thanksgiving, the Army Corps of Engineers said they would close a campsite to “protect the general public from the violent confrontations between protesters and law enforcement officials that have occurred in this area”.

The closure will affect the Oceti Sakowin camp and the area north of the Cannonball River.

The event, led by Michael Wood Jr, a veteran and former Baltimore police officer, and Wesley Clark Jr, a veteran, screenwriter and activist, is already collecting names of those who are interested in a second trip, which could be as early as the second week in December.

“This event (and this event page) will not tolerate hate, violence or divisive behaivor of any kind,” their Facebook page reads.

“We’re doing this to support our country so lets do it with honor, working together. We can stop this savage injustice being committed right here at home. If not us, who? If not now, when?”

The planned pipeline is a $3.7 billion project that would cross four states and potentially destroy a Native American reserve’s historical artifacts, burial and prayer sites. It could also pollute the Missouri river.

Once completed, it would carry 470,000 barrels of crude oil per day through both Dakotas, Iowa and Illinois.

Legal disputes have slowed the process down, but the pipeline is almost complete.

Law enforcement has been widely criticised for its treatment of the protesters, pointing sniper guns at unarmed civilians, using a taser, sound cannons and firing rubber bullets at journalists.

The most serious conflict was when protester, 21-year-old Sophia Wilanksy, had her left arm and hand badly damaged following an explosion. Her father said it was due to a police grenade, whereas police said demonstrators had caused the explosion. More than 300 people were treated for injuries that day.

The military event organisers have asked participants to bring body armor, gas masks, earplugs and shooting mufflers, but has warned not to bring drugs, alcohol or weapons.

Anyone found on the closed-off land after 5 December could be charged with trespassing, the US army said.

President Obama revealed that the army was considering an alternative route for the project, but Kelcy Warren, chief executive of the pipeline company, Energy Transfer Partners, told the Associated Press that it would not consider a different route.