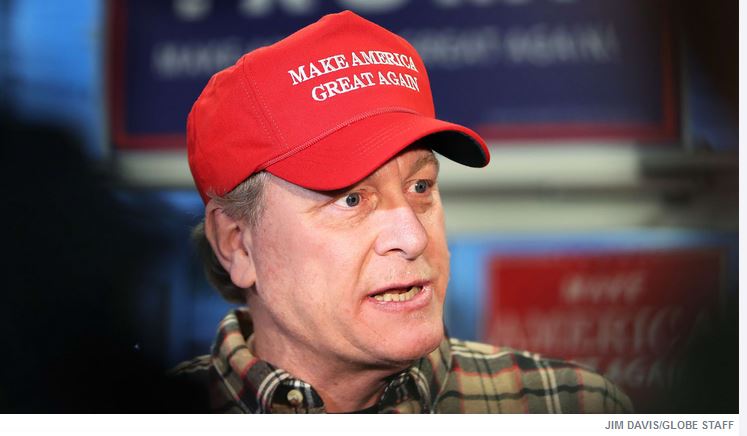 Baseball great Curt Schilling has quite a story he’d like to share—and it’s not about his famous “bloody sock” playoff game. On Tuesday, the retired Boston Red Sox pitcher promoted a video on his Facebook page explaining the pro-Trump QAnon conspiracy, which posits that President Trump and his allies in the military are about to sweep away a cabal of globalist elites responsible for all the evil in the world.

The byzantine QAnon theory, which centers on anonymous clues about the real state of the world left on Internet message boards by an unknown figure dubbed “Q,” relies on the idea that Trump is about to sweep away his enemies in a mass arrest dubbed “The Storm.” While anyone with internet access could be the one posing as “Q,” the theory’s followers are convinced that the clues are coming from high-up within the Trump administration.

QAnon is already having dangerous real-world effects—on June 15, an armed man in an improvised armored truck blocked traffic on a highway near the Hoover Dam and held up signs that appeared to reference QAnon.

“I’ve been asked about ‘Q’ for months now,” Schilling wrote in a Facebook post Tuesday. “Never really knew what it was all about, I had my ideas but until recently I hadn’t done anything. I started to research this about a month ago and was sent this today. You will not be able to stop watching once you start.”

“The narrator blames this cabal for ‘hijacking’ North Korea’s Kim dynasty and forcing Miley Cyrus to abandon her family-friendly ‘Hannah Montana‘ image in an effort to destabilize the American family structure.”

Schilling’s Facebook post includes a link to a pro-QAnon video that presents a version of the conspiracy theory that’s wild even by the already warped standards of the QAnon community. Filled with images of hooded figures and secret society meeting, the video’s narrator posits that every president since Ronald Reagan has been a “criminal president” allied with a global cabal responsible for all the evil in the world.

The video’s narrator blames this cabal for, among other things, orchestrating the Sandy Hook and Las Vegas mass shootings, “hijacking” North Korea’s Kim dynasty to force them to make nuclear missiles, and, according to one especially surprising segment of the video, forcing Miley Cyrus to abandon her family-friendly “Hannah Montana” image in an effort to destabilize the American family structure.

The solution to these deep state machinations, according to the video, is an alliance between Trump, the military and foreign figures like Vladimir Putin, who supposedly helped convince Trump to run for president to stop America’s villainous government bureaucrats.

“It came down to two choices for America: launch a military coup to seize the government from whichever cabal puppet was in the White House at the time, or win legitimately, take control of the NSA, expose the criminals for what they are and arrest them all,” the narrator says.

The video Schilling also includes allusions to the Pizzagate conspiracy, which has been embraced by many QAnon believers. The video shows an apparently random selection of celebrities, including Eminem, Jonah Hill, Jackie Chan, and Emma Watson, before showing an image of a child with a hand over its mouth.

“They will be seriously punished,” the video’s narrator says, flashing to a picture of Guantanamo Bay—a reference to the notion popular among QAnon believers that “elites,” including, apparently, the celebrities listed in the video, will soon be imprisoned there.

Schilling has frequently encountered political controversy since retiring from baseball, losing his job as an ESPN baseball analyst in 2016 after he mocked transgender people on Facebook.

Schilling, who hosts a podcast for Breitbart, now joins Roseanne Barr in the ranks of celebrity QAnon promoters.

Correction, 6/27/18: This article previously stated the “bloody sock” game was in the World Series. It was game 6 of the American League Championship Series.