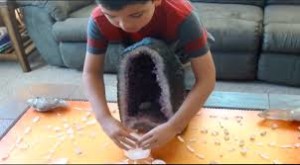 We hear so much about “crystal children” and the information they carry. Here’s one example of just that!

I gave Adam, age seven, several Lemurian Crystals and asked him to create a grid. We had no other conversation regarding the subject.

Less than 30 minutes later, this is what he created and his explained how it worked.

8 year old Adam introduces his latest crystal grid, which he calls a “web” grid. It pulls in dark energy and transmutes it to the light.

Adam didn’t pull the pattern of the grid out of a book or research it on the internet. Instead he chose to listen to the guidance of the stones themselves.