I’ve been extra chatty lately, writing articles one right after another, because we’re in such profound change that I feel it might be helpful to some to hear more from me during this major Shift phase. The expected and unexpected, the weird and super weird, the strange and unusual, the quantum nonlinear and so much more is here now but there’s nothing to fear, only understand better from a personal level for each of us.

I published my previous article on Saturday, August 19, 2017, because I HAD to for a lot of different reasons. When I woke up Sunday morning August 20, 2017, it was semi-dark outside and I instantly knew I wasn’t in linear time again and to just roll with it, whatever “it” was or will become. I knew I was in the Solar eclipse near full totality, which was “impossible” because 1) I live in Southern California below Los Angles and above San Diego and inland a bit. I knew what I was experiencing wasn’t “normal” but there’s very little that is “normal” anymore, and thankfully after a lifetime of Team Dark stunts and attacks etc., not much scares me so this was just a new adventure to me. [I’m sharing all this because everyone is or will be having their own unique adventures too, both in linear time and in nonlinear quantum time and in multiple dimensions also.] And 2) because the Solar eclipse wasn’t going to happen until the next day, Monday, August 21, 2017!

I got up and went about my physical chores as usual, but as the hours past on Sunday the 20th, the semi-darkness caused by the Solar eclipse that was happening the next day, Monday, didn’t increase or decrease but stayed the same all day! I knew I wasn’t in linear time and space but was in some quantum nonlinear Now Moment and to pay attention, Feel, learn, See whatever was available to See from Higher Awareness and so on and just ride this thing out for as long as it lasted, and it lasted all day until the Sun went down. I shouldn’t need to say that it made for a very unusual day that gave me plenty of “time” to move about in, pay attention to, create within, look into quantum No Time. 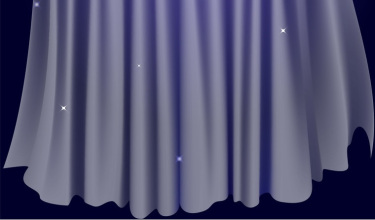 A few hours into this on Sunday, August 20th, I Saw something out in space. It was both out in physical space, and it was in higher dimensions too, so for me to say it was “here” and nowhere else simultaneously is incorrect. This is what it’s like trying to linearly write/talk about nonlinear, quantum, multidimensional things, experiences, visions, educations, creations and such; rather difficult at best and still often limited unfortunately.

While my personal nonlinear Solar eclipse was happening for me a day before the actual physical Solar eclipse, I Saw an image of something huge, massive out in physical space that looked to me much like these two images above. The color of this wall of energy, this energetic veil, this clearly visible energy demarcation line out in space was somewhat similar to the color of the dusty gray purple image. Should have been more on the mauve side than purple but whatever, that’s just the way I perceived it at that No Time time. There weren’t stars or anything in or on it, it was opaque and you could see black space below it and above it unlike the image above. It looked like a huge very slowly undulating energy curtain much like the second pale pink image above. As I viewed this energy veil or curtain in space, I knew it was what Sandra Walter had recently mentioned in one of her articles that she called a ‘wall’. (I’ll add a link to her article where she mentions this outside of my copyright at the bottom if interested in reading it.)

Energy veil, energy curtain, energy wall, we’re talking about the same thing, and based on what I’ve experienced so far, we’re ALL passing through it at some point within the rest of the month of August 2017.

The August 21, 2017 Solar eclipse across the USA wiped away, erased everything that was of the old lower Earth world reality/realities and codes etc. which was necessary preparation for everyone to reboot and ascend/evolve through this Separation of Worlds energy curtain, veil or ‘wall’ where only the NEW much higher frequency Light codes etc. were simultaneously installed. Again, this Ascension Process energy demarcation event happened to me when and how I experienced and perceived IT, but how and when (which day, which hour, which moment in No Time nonlinear quantum-ness) each person experiences and perceives IT will be uniquely theirs. It is however happening continuously from just before the August 21, 2017 eclipse, through the rest of August as best I’m perceiving to date. If I can experience the Solar eclipse a day before it physically happens, and experience it with greater Solar darkness than where I physically live would produce, and experience it from sunup to sundown, then anything is possible from here on out so just roll with the quantum “anomalies” and enjoy the ride(s).

As I viewed this energy demarcation line, or curtain, veil, or ‘wall’ out in space, I did so from the approach side of it. The Earth was behind me by quiet a bit as I viewed it, and before I forget to mention this, the Earth was minuscule in size next to this massive energy curtain/veil/wall. A few moments later the vision changed and I and Earth now were on the departure side of this energy curtain or veil or ‘wall’. The crossing through it happened in the twinkling of an eye and I felt nothing physically from having passed through it. I was in the Zero Point, No Time throughout this entire experience that, from one perspective lasted from sunup to sundown on Sunday, August 20th. From another perspective it lasted a split second, and from another perspective it didn’t even happen, and from another it happened over a couple of linear hours and so on. Welcome to conscious multidimensional being and also to getting familiar, once again, with existing within quantum No Time or Zero Point while at those many other levels of being and reality/realities. Duality reality was juggling two balls, this is juggling dozens and dozens and more beyond linear time space reality life.

The rest of Sunday, August 20th continued to be ultra strange and timeless which feels pretty comfy everyone because everything and everyone else isn’t there! Nice and quiet and expansive for farther than one can imagine… I remember going to bed that night but nothing after that point.

When I woke up the next day—just saying that feels increasingly weird and wrong but we need to continue this language until we don’t—Monday, August 21, 2017 the physical day of the Solar eclipse, I went about my usual morning routines then went outside in my backyard to bask in the physical Solar eclipse and do some Work from higher levels. A few hours after this I felt Lisa Transcendence Brown had something important to say, to share, so I checked out her blog area and discovered she’d made a new video on August 20, 2017. (I’ll add a link to it too at the end of my article if interested. I strongly suggest you watch it, and read Sandra Walter’s article(s) because we’re all talking about this Separation of Worlds that’s happened, the Solar eclipse energies, and the biggie — crossing this energy curtain, veil, wall, and Zero Point space now and/or throughout the rest of August.

I’ll end this here because we’re all still in IT, in this unusual but wonderful passing through this energy curtain, veil, wall and Zero Point space and energies so things are still and will continue to feel and behave rather strangely. It’s all the ongoing Ascension Process however, it’s just that we’ve reached the really exciting point finally where things are and will continue to get increasingly easy and beautiful, magical and divine, self-empowered and creative so be willing to let go of EVERYTHING (yes I just yelled that word!) so that you can more comfortably, quickly and easily ascend/evolve into the NEW higher everything. We’re not in linearity anymore so expect the unexpected and Divine.

My deepest Gratitude to All for doing what only each of you can do for us All.

Donations can be made here and Thank You for the energy exchange.

Copyright © Denise Le Fay & HighHeartLife, 2017. All rights reserved. You may copy and distribute this article so long as you don’t alter it in any way, the content remains complete, credit is given to the author and this URL https://highheartlife.wordpress.com and Copyright Notice is included.