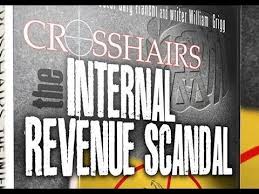 “Make them cry… You’re not out there to take any prisoners… Enforce collection until they come to their knees.”

— Instructions given at a 1996 IRS training lecture

“More tax is collected by fear and intimidation than by the law. People are afraid of the IRS.” — Former IRS District Chief David Patnoe

For taxpayers everywhere, terror is spelled I-R-S — but the Internal Revenue Service is much more than just the world’s most fearsome and ruthless tax collection agency. Current and former IRS officials have described how the agency literally considers itself to be at war with the tax-paying public. Leaked videos of IRS employee training sessions have revealed how agents have been taught to use unethical and illegal means to extract money from long-suffering taxpayers, and to retaliate against anybody — whether ordinary citizen or conscience-stricken agency employee — who objects.

Since at least 2011, the IRS has carried out another role — that of harassing and persecuting the Obama administration’s political rivals, while granting special privileges to his allies. Anybody who belonged to a group with words like “Patriot” or “Tea Party” in its name found himself in the IRS’s cross-hairs.

This illegal harassment wasn’t limited to one state, or one region — and it didn’t end with invasive questions about finances, donors, and membership lists. Like secret police investigators in a Communist country, IRS officials looking into the activities of pro-life activists scrutinized the “content of their prayers” for supposedly inappropriate political content, and even tried to impose limits on their peaceful outreach and activism.

While the IRS was carrying out this campaign of persecution, its employees were spending tens of millions of dollars on extravagant employee retreats — and unlike common taxpayers, they weren’t required to keep track of their expenses. When they weren’t busy abusing taxpayers and wasting their money, unionized IRS employees were preparing for the most radical expansion of the agency’s mandate in its history, which will put it in charge of enforcing the new “Obamacare” law.

That’s right: Under Obamacare, the IRS will have the power to make life-and-death decisions affecting every U.S. citizen — and the officials directly responsible for the harassment of the Tea Party movement will have critical roles in administering the new government-run health care system.

How did we end up with the IRS? What are the dangers it represents to innocent taxpayers? What can be done to rein in that rogue agency — and is it possible for us to be rid of it completely? You owe it to yourself to see “Crosshairs: The Internal Revenue Scandal” — and to share what you learn with your friends and family. Your lives, and those of your loved ones, may literally depend on it.