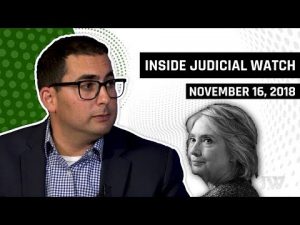 In 2016, Clinton was required to submit under oath written answers to Judicial Watch’s questions. Clinton objected to and refused to answer questions about the creation of her email system; her decision to use the system despite warnings from State Department cybersecurity officials; and the basis for her claim that the State Department had “90-95%” of her emails. After a lengthy hearing on Wednesday, Judge Sullivan ruled that Clinton must address two questions that she refused to answer under-oath: “Describe the creation of the clintonemail.com system, including who decided to create the system, the date it was decided to create the system, why it was created, who set it up, and when it became operational.”

“During your October 22, 2015 appearance before the U.S. House of Representatives Select Committee on Benghazi, you testified that 90 to 95 percent of your emails “were in the State’s system” and “if they wanted to see them, they would certainly have been able to do so.”