“The proof of Donald Trump being wiretapped is in the documents that were handed over to the FBI” Montgomery’s attorney Larry Klayman told reporters Fanning and Jones.

Federal Judge Richard J. Leon on December 27, 2018 denied a request by the DOJ and Mueller’s Special Counsel Office to delay a court date for author Jerome Corsi’s $350 million lawsuit against Robert Mueller, the DOJ, CIA, FBI, and NSA. Corsi is suing Mueller and those intelligence agencies for targeting him with “illegal and unconstitutional” surveillance and blackmail.

DOJ lawyers argued unsuccessfully that the January 3, 2019 3:00 pm court date should be delayed on the grounds that the federal government is partially shut down.

Corsi is represented in that case by attorney Larry E. Klayman.

In a separate case, whistleblower Montgomery and his attorney Klayman filed a joint lawsuit in 2017 against Barack Obama, Mueller, the CIA, the FBI, the NSA and other federal officials and agencies. Montgomery’s and Klayman’s lawsuit alleged that the defendants ignored and then covered up Montgomery’s whistleblower complaints of illegal domestic surveillance. (HYPERLINK)

In 2015 Klayman helped Montgomery secure limited immunity agreements in exchange for turning over computer hard drives and other physical evidence of that illegal surveillance to FBI Director James Comey’s office.

“THIS IS VERY, VERY, VERY POWERFUL TECHNOLOGY, AND IT WAS CREATED UNDER ROBERT MUELLER’S WATCH. THE LAST PERSON I WOULD THINK THAT SHOULD BE INVESTIGATING DONALD TRUMP IS ROBERT MUELLER, WHO WAS COLLECTING INFORMATION ON DONALD TRUMP TEN YEARS AGO … MUELLER HAS A HUGE CONFLICT OF INTEREST, A HUGE CONFLICT OF INTEREST” — CIA CONTRACTOR-TURNED-WHISTLEBLOWER DENNIS MONTGOMERY 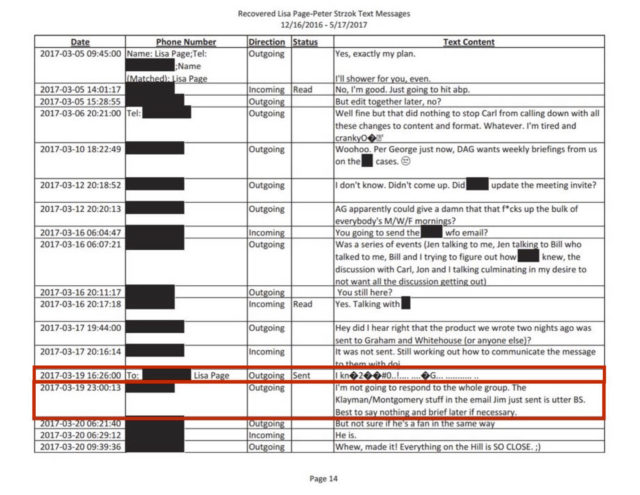 Disgraced FBI agent Peter Strzok and his paramour, FBI attorney Lisa Page, who together conspired to bring down Donald Trump, were also involved in the Montgomery whistleblower affair.

Strzok, the FBI’s top counterintelligence official and Page, the FBI attorney who was advising Comey and helping to develop the Trump Russia investigation, exchanged a cryptic text message on Sunday evening, March 19, 2017.

“I’m not going to respond to the whole group. The Klayman/Montgomery stuff in the email Jim just sent is utter BS. Best to say nothing and brief later if necessary.” – March 19, 2017 Strzok/Page text message sent hours after Lt. General Thomas McInerney went on air to discuss Brennan’s and Clapper’s secret surveillance system “The Hammer”

During the radio interview, Lt. General McInerney engaged in a detailed discussion of whistleblower Montgomery’s claims that Brennan and Clapper used their secret surveillance system known as “The Hammer” to spy on Trump “a zillion times.”

“Hammer stunned me…It stunned me Dave. It is something that will exceed anything done before in the U.S. government” McInerney told radio host Dr. Dave Janda.

“When I read it, I actually physically gasped” Janda added.

Subsequently, Wikileaks appeared to confirm this information when it leaked classified CIA documents about a mobile phone hacking tool called HAMR (The Hammer) as part of the “Vault 7” CIA document dump. 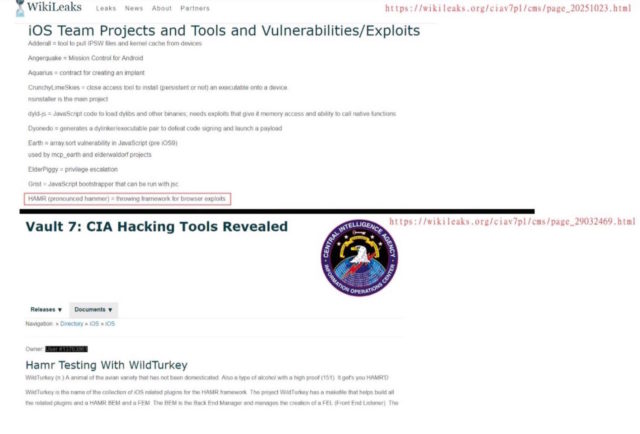 McInerney, a Fox News military analyst whom the Washington Post dubbed “THE GENERAL WHO CALLS IN THE BIG GUNS,” read live over the air an article by these authors about Montgomery and the “Hammer” surveillance system.

“This is so far greater than Watergate. Watergate was just nothing compared to, if Hammer is true, and someone needs to verify it…it is very important that this be looked at right now” McInerney said during the interview.

“This is a very serious thing. Everything about the Russians stealing the election is tactical deception.”

Lisa Page is not just some rank and file FBI lawyer.

Additional text messages between Strzok and Page suggest that the FBI was briefing the Obama White House on the status of the Trump Russia investigation.

Recently deceased 26-year-old investigative journalist Bre Payton reported at The Federalist on December 13, 2018 that a newly-released DOJ Office of the Inspector General report reveals that Mueller’s Special Counsel Investigation (SCI) Records Officer deleted text messages that Strzok and Page exchanged while working on the Russian Collusion investigation. Deleting government records is a violation of the Federal Records Act. Destruction of evidence is also considered a crime.

“The 11-page report reveals that almost a month after Strzok was removed from Mueller’s team, his government-issued iPhone was wiped clean and restored to factory settings by another individual working in Mueller’s office” Payton reported. “The special counsel’s Record’s Officer told investigators that ‘she determined it did not contain records that needed to be retained.’” Under the Federal Records Act, all government work product are considered “federal records” and government property. 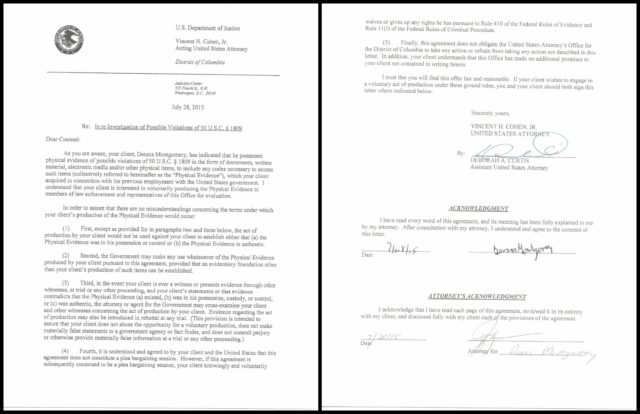 In July 2015, Assistant US Attorney Deborah Curtis, under the guidance of United States District Judge for the District of Columbia Royce C. Lamberth (one-time head of the FISA court), set up two limited immunity agreements with whistleblower Dennis Montgomery for production of physical evidence and for testimony.

Montgomery turned over the hard drives at the FBI’s Miami Field Office in Miramar, FL. The FBI provided Montgomery and Klayman with an itemized receipt for the computer hard drives. 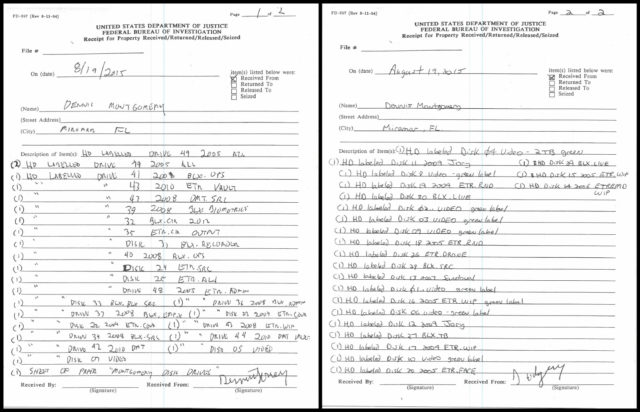 Montgomery claims that the data stored on those computer drives prove the existence of an illegal surveillance system run by Obama’s intelligence chiefs -Mueller, Brennan and Clapper.

According to plaintiffs, the FBI, under Comey’s direction, sought to “cover-up” its wrongdoing by inducing Montgomery to turn over 47 computer hard drives containing evidence of the illegal surveillance. They also claim that the FBI has refused to investigate plaintiffs’ claims or return the incriminating hard drives…

…Montgomery alleges that he only gave the hard drives to the FBI because the FBI expressly promised that it would conduct an investigation of the mass surveillance. Former General Counsel of the FBI, James Baker (“Baker”), allegedly assured plaintiffs that Comey was taking “hands on” supervision of the Montgomery investigation, given its importance. Comey and the FBI, however, never conducted the investigation, and Montgomery alleges that they are concealing the hard drives in order “to ensure that the evidence contained therein is not investigated or revealed to the public and prosecuted.”

Strzok and Page first started exchanging text messages the same week that Montgomery turned over the 47 computer hard drives to the FBI.

Montgomery turned over the 47 hard drives to the FBI’s Miami Field Office on August 19, 2015. The first Strzok-Page text message released by the FBI is date-stamped August 16, 2015.

“It was a videotaped deposition and I laid out these private domestic surveillance programs that were being run. I specifically named names. John Brennan and James Clapper.”

After debriefing Montgomery, Special Agents Giardina and Barnett went on to join Mueller’s Special Counsel Russia Collusion investigation team In May of 2018.

Montgomery says that the evidence he provided to the FBI proves the existence of an illegal, Orwellian surveillance system weaponized to take down Obama’s political enemies.

FBI General Counsel Baker played one of the most important roles in Mueller’s operation to take down Trump.

It was Baker who met with Mother Jones investigative reporter David Corn weeks before the 2016 election, just before Corn broke the story of the now-discredited Trump Dossier.

The dossier was attributed to former British spy Christopher Steele.

Both Baker and Lisa Page worked as FBI legal analysts for Comey.

Lisa Page resigned from the FBI on the same day as FBI General Counsel James Baker according to the New York Times.

The Washington Post called Mueller and Comey friends and “Brothers in Arms.”

“There are no coincidences”

There was collusion. The Trump campaign was not colluding with Russia.

Trump’s opponent former Secretary of State Hillary Clinton and her husband, former U.S. President Bill Clinton, were colluding with Russian operatives that worked for the FBI.

The Clintons sold a critical national security asset to Russia under their shady Uranium One deal.

The Clintons sold out their country for $145 million.

“Remember: Uranium is a main ingredient in atomic bombs” Deroy Murdock wrote in National Review. “Why would the Obama-Clinton administration let Russia have even a firecracker’s worth of American uranium? This is the $145 million question.”
.

The Clintons are traitors. The enemy actions of Hillary and Bill Clinton are in the same league as the actions of Cold War Soviet atomic spies Julius and Ethel Rosenberg. 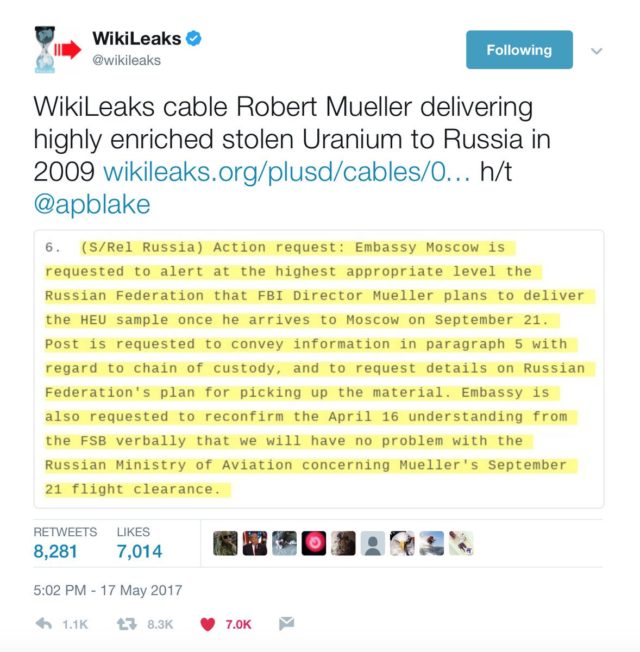 The FBI’s Operation Crossfire Hurricane is a conspiracy to distract the American people from the Obama administration’s tsunami of treason and sedition.

Mueller’s investigation has turned up no evidence of Trump Russian collusion.

Mueller and his team know there was “there’s no big there there.”

Brennan and Clapper, according to Montgomery, ran their own “private” surveillance system to spy on Supreme Court Justices, 159 Article III judges, elected officials, and 20 million other Americans.

The ultimate objective of these Obama administration illegal domestic surveillance operations, Montgomery says, was to weaponize illegally-collected data and employ it as leverage against their surveillance targets.

For Obama and his intelligence chiefs, the super surveillance system’s number one high value target was Donald Trump.

“The Hammer” and the Obama administration officials who built it, utilized it, and then covered up its existence are part of a seditious cabal.

“Stroke or no stroke, I am going to expose the CIA and NSA misdeeds until the American people know the truth” Montgomery told Klayman during a radio interview.

“I have put my family for years at great risk by coming forward.”

“This is my last stand for America” declared Montgomery.

It used to be considered a fundamental maxim in FBI investigations that “there are no coincidences.”
.
Mueller, Comey, the Clintons. Obama, Brennan, Clapper, Curtis, Giardina, Barnett, Baker, Strzok, and Page are involved in a conspiracy of treason.

The Hammer, Operation Crossfire Hurricane, and Special Counsel Mueller’s Russian Collusion investigation are not only elements of this conspiracy–but they add up to a coup d’etat.

Mary Fanning and Alan Jones  published on The American Report