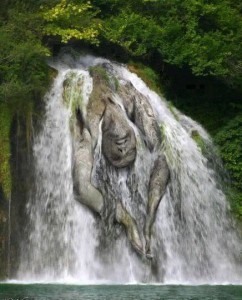 On December 17 at 12:40 PM Eastern U.S. time, the ice giant Uranus goes direct in 9 Aries, an event destined to send hot and cold chills up and down your spine.
If you’ve experienced trapped energies and stalled momentums since the summer (when Uranus went retrograde in mid-July) it’s likely that those stuck forces will get undammed as the river of life force surges its banks in the coming Uranian turnaround.

Uranus presides over the highest vantage point we possess. It takes the most accelerated parts of you and accelerates them, so get ready for a release of energies that may pop circuit breakers left and right, and spin you around into some new state of being.

Freed energy-rushes mark the release of trapped forces of creativity that, for one reason or other, got stuck in your body, your chakras and nervous system. These electrical surges remind you that the human organism your soul inhabits  possesses far more energy than we normally realize or have access to. Trapped life force, which Sanskrit refers to as kundalini, or the coiled serpent, can release enormous amounts of sexuality, passion, creativity and the glory of life itself. The paradox of kundalini is that we rarely have access to it until we need it, so that, on the verge of disaster some deeper part of our trapped nature is freed.

Collectively and individually we’re undergoing the great initiation of our time, designed to propel us from being a half-alive species to becoming fully present in the physical plane. This is a daunting challenge because each day the weight of incarnation presses down on us with a long list of reasons not to be fully present. You pass this Uranian initiation when you harness those adrenaline rushes to gain a new kind of presence in the midst of the madness. Despite confusion and chaos — or perhaps because of it — you dig down into the dregs of a soul force you never knew you had, and, while remaining tethered to the physical plane, you become no longer trapped by it, but begin shining like the Bright Ones throughout history, who, faced with the worst, came to see themselves for the first time, and know they were made of love.

When this sleeping serpent awakes, here in the tail end of the Year of the Snake, (see my Year of the Snake report) entrenched patterns of obsolete behavior are struck by lightning. Uranus catapults us into altered time-space, where we lose our bearings in the old familiar structures, and plunge into an ultra-dimensional vantage point. Similar to when we die, we cascade into a stream of energies that we streamed through throughout our life, but didn’t know it because we built balsa wood structures over an ocean of love. We become lifted up and taken by surge into a dimension where we are offered a fuller existence, and a whole new way to look at the most fundamental things with heightened meaning.

Now the being of love that you’ve always known you are deep down in your soul has direct access to the world at large. The Great Reversal occurs, where things once trivial become center-stage and things you thought you couldn’t do without dissolve into particles of light. These are demanding times we live in, that challenge us to stay grounded in the wake of the flood, and find something beautiful amidst the ruins of an obsolete civilization.

Who Are You Really?  What Are You Here for?

How Much Longer Are You Going to Wait?

Mark Boraxis a master Soul Level Astrologer and bestselling author who lives in Vermont and writes the monthly Cosmic Weather Report email newsletter. He offers readings over the telephone and in-person, and classes that catalyze individual evolution.