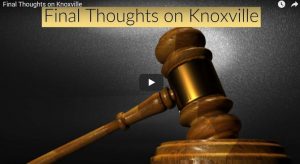 Katie, Lisa and I offer our final thoughts on the events in Knoxville.