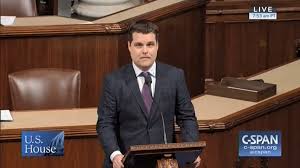 “The House must immediately make public the memo prepared by the Intelligence Committee regarding the FBI and the Department of Justice. The facts contained in this memo are jaw-dropping and demand full transparency. There is no higher priority than the release of this information to preserve our democracy,” Rep. Gaetz said.
BACKGROUND INFORMATION

In December, Rep. Gaetz questioned Deputy Attorney General Rod Rosenstein in the House Judiciary Committee hearing about the clear examples of bias and conflicts of interest at the Department of Justice (DOJ), and within Special Counsel Robert Mueller’s team of investigators. In his questions, Rep. Gaetz asked when the DOJ learned that Associate Deputy Attorney General Bruce J. Ohr had contacted Christopher Steele, former British spy and author of the infamous ‘Trump dossier,’ a document called “salacious and unverified” by former FBI Director James Comey.

Additionally, Rep. Gaetz asked when the DOJ discovered that Mr. Ohr’s wife, Nellie, was employed by Fusion GPS, the company that sponsored the creation and distribution of the dossier. Mr. Rosenstein said that he could not answer Rep. Gaetz’s questions, but that documents would be turned over to the House Permanent Select Committee on Intelligence — even though the Judiciary Committee, not the Intelligence Committee, has oversight authority over the DOJ.

Earlier in December, Rep. Gaetz questioned FBI Director Christopher Wray about former Acting FBI Director Andrew McCabe’s statement that the FBI investigation into Hillary Clinton’s misuse of a personal email server was “referred to as ‘special’” and that “the decision was made to investigate it at HQ with a small team.”

In November, Reps. Gaetz, Gohmert, and Biggs, all members of the Judiciary Committee, sent a letter to Director Wray, asking for an investigation to be launched into the FBI’s treatment of former Secretary of State Hillary Clinton during their e-mail investigation. On December 6th, Congressman Gaetz, alongside Congressmen Jim Jordan (OH-04), Mark Meadows (NC-11), Scott Perry (PA-04), Jody Hice (GA-10), and Andy Biggs (AZ-05), held a press conference calling for an investigation into the Federal Bureau of Investigation’s (FBI) system and procedures that allow special treatment and bias to take place, in order to prevent “special” treatment from happening again.