A company from Australia – Victorian Organic Solar Cell Consortium – has developed and began marketing of solar panels that can be created with a 3D printer. 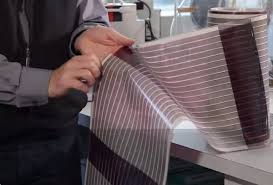 The group,  consisting of scientists from the CSIRO, the University of Melbourne and Monash University have been working on the technology for over seven years and have figured out a way to cheaply print the panels onto plastic, including smart-phones and laptops, enabling self charging electronics.  They are also able to print directly on to walls and windows using an opaque solar film and claim that they can line a skyscraper with panels, making it totally electrically self sufficient.

“We print them onto plastic in more or less the same way we print our plastic banknotes,” said Fiona Scholes, senior research scientist at CSIRO. “Connecting our solar panels is as simple as connecting a battery. It’s very cheap. The way in which it looks and works is quite different to conventional silicon rooftop solar.”

The next step is to create a solar spray coating to enhance the power of the panel.  “We would like to improve the efficiency of solar panels – we need to develop solar inks to generate more energy from sunlight,” said Scholes. “We are confident we can push the technology further in the years to come.”