subject: RE: Comey’s Trump Tower Meeting Was Used for FBI’s

(sighhhhhhhhhhhhh)…just like the FDIC (and arguably the US TREASURY), the FBI was created to be a Federal Reserve, Et. Al.’s “In-House” tool…in this particular instance of “China’s” infamous plan of “by-any-means-necessary”, GB was/is kneck deep in their willingness to assist in implementation of said plan, too…and their Parliment voted/passed orders for such actions of “assistance”, leaving a very long paper trail, lol…GB was an ally of “who?” Really, it was more a matter of a failed “nation/corporation” siding with status quo…and “China” was/has been the so-called “status quo” for a very long time, despite appearances historically portrayed/played for “the public” of the world 🙂

brilliant fuckupary done “behind the scenes”, now leaking through for all to see all that no longer serves 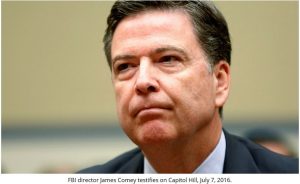 While the meeting was described by former FBI Director James Comey as a ‘defensive briefing,’ it was used to gain information from Trump, new IG report reveals

Former FBI Director James Comey’s first meeting with then-President-elect Donald Trump appears to have been part of the agency’s counterintelligence investigation into the Trump campaign.

Comey has described the Jan. 6, 2017, briefing at Trump Tower as a defensive briefing intended to inform the president-elect of salacious allegations contained in the so-called “Steele dossier.”

He had testified to Congress on June 8, 2017, that he “was briefing [Trump] on it because, because we had been told by the media it was about to launch. We didn’t want to be keeping that from him. He needed to know this was being said. I was very keen not to leave him with an impression that the bureau was trying to do something to him.”

Comey’s testimony to Department of Justice (DOJ) Inspector General Michael Horowitz, as part of the agency’s investigation into Comey, however, paints a different picture.

Comey told Horowitz that the information he obtained from his conversation with Trump “ought to be treated … [like] FISA derived information or information in a [counterintelligence] investigation.” In other words, his meeting with Trump had very direct surveillance overtones and intentions—and directly counters what he had testified to Congress.

According to his congressional testimony, Comey had told Trump at the Jan. 6, 2017, meeting that he wasn’t under investigation by the FBI, noting, “sir, we’re not personally investigating you.”

Prior to the meeting with Trump at Trump Tower, Comey met with FBI officials involved in the “Crossfire Hurricane” investigation into the Trump campaign to discuss a strategy to obtain information and how to memorialize it right after the meeting.

Comey told Horowitz that in advance of his meeting with Trump, he “met with senior leaders of the FBI, including his Chief of Staff James Rybicki, then-FBI Deputy Director Andrew McCabe, then-FBI General Counsel James Baker, and the supervisors of the FBI’s investigation into Russian interference with the 2016 presidential election.”

According to the IG report, multiple FBI witnesses said the meeting was intended, in part, to see how Trump would react to the allegations and whether he would reveal new information useful for their counterintelligence investigation.

“Witnesses interviewed by the OIG also said that they discussed Trump’s potential responses to being told about the ‘salacious’ information, including that Trump might make statements about, or provide information of value to, the pending Russian interference investigation,” the report reads.

It was also agreed that Comey should immediately write a memo based on his conversation with the president, in what appears to have been an effort to memorialize any information that might be useful in their investigation.

“Multiple FBI witnesses recalled agreeing ahead of time that Comey should memorialize his meeting with Trump immediately after it occurred,” the IG report reads.

Comey told Horowitz that “he had a secure FBI laptop waiting for him in his FBI vehicle and that when he got into the vehicle, he was handed the laptop and ‘began typing [Memo 1] as the vehicle moved.’”

He said he continued working on Memo 1 until he arrived at the FBI’s New York field office, where Comey gave a “quick download” of his conversation with Trump to Rybicki, McCabe, Baker, and supervisors of the FBI’s Crossfire Hurricane investigative team via secure video teleconference.

Additionally, Horowitz noted in a footnote of the report that during his investigation, he had determined there were actually two versions of Memo 1:

“The first version was dated January 6, 2017, and was drafted by Comey as a document on an FBI classified laptop in the car departing Trump Tower. A member of Comey’s protective detail emailed this document to Comey, Rybicki, and McCabe on the evening of January 6, 2017, using the FBI’s classified email system. This version was not marked with a classification banner/header, portion markings, or a classification authority block.

Although Horowitz noted that the two memos were substantially similar, it’s unclear why Comey felt compelled to have the initial draft emailed to McCabe and Rybicki immediately following his meeting with Trump—and without any classification markings.

Notably, McCabe played a crucial role in the FBI’s investigation into the Trump campaign and opened an investigation into Trump in the days following Comey’s firing by Trump. Ultimately, the appointment of special counsel Robert Mueller removed the investigations from McCabe’s authority.

Details of Comey’s Meeting With Trump

Comey outlined to the inspector general the details of the meeting that took place between only himself and Trump:

“At the conclusion of our session, the COS [Chief of Staff Reince Priebus] asked whether there is anything we haven’t mentioned that they should know or that might come out. I said there was something that Clapper wanted me to speak to the PE [President-Elect] about alone or in a very small group …

“… I then executed the session exactly as I had planned. I told him [President Trump] that I wanted to meet with him to tell him more about what is in the reports written by [redacted–likely Steele]. I said that the written reports themselves were [redacted] and the content known at IC senior level and that I didn’t want him caught cold by some of the detail …

“I said the Russians allegedly had tapes involving him and prostitutes at the Presidential Suite at the Ritz Carlton in Moscow from about 2013 … I said I wasn’t saying this was true, only that I wanted him to know both that it had been reported and that the reports were in many hands. I said media like CNN had them and were looking for a news hook. I said it was important that we not give them the excuse to write that the FBI has the material or [redacted] and that we were keeping it very close-hold.”

Notably, Comey only informed Trump of the “salacious” details contained within the dossier. Comey would later tell CNN’s Jake Tapper that he did so because “that was the part that the leaders of the intelligence community agreed he needed to be told about.”

Mr. Tapper: “In January 2017 when you met with President Trump and you did that oral presentation of what’s in that two-page memo, summarizing the Steele dossier. We know from the book that you talked about these unverified allegations involving him and prostitutes.

Did you brief him about any—any of the other things in the Steele dossier, claims that his associates, Michael Cohen or Paul Manafort, were potentially working with the Russians? Or was it only about the prostitutes?”

Mr. Comey: “It was only about the salacious part of it.”

Mr. Comey: “Because that was the part that the leaders of the intelligence community agreed he needed to be told about because we knew it and thought it was about to become public.”

Comey’s interview with Tapper was somewhat farcical as Clapper had personally briefed Tapper about the Comey–Trump meeting almost immediately after it occurred. We know this from findings contained within the House’s Final Report on Russian Active Measures:

“It is important to note that Evan Perez, Jim Sciutto, Jake Tapper, and Carl Bernstein of CNN reported on January 12, 2016 [original publication was on January 10, 2017], that President-elect Trump was briefed on classified information indicating that the Russians have compromising personal or financial information that the Russians could use against President-elect Trump.

“The Committee’s investigation revealed that President-elect Trump was indeed briefed on the contents of the Steele dossier and when questioned by the Committee, former Director of National Intelligence James Clapper admitted that he confirmed the existence of the dossier to the media.”

Clapper at first denied leaking the information of the dossier and the Comey–Trump meeting, but ultimately acknowledged having done so:

“When initially asked about leaks related to the ICA in July 2017, former DNI Clapper flatly denied ‘discuss[ing] the dossier [compiled by Steele] or any other intelligence related to Russia hacking of the 2016 election with journalists.’ Clapper subsequently acknowledged discussing the ‘dossier with CNN journalist Jake Tapper,’ and admitted that he might have spoken with other journalists about the same topic.

“Clapper’s discussion with Tapper took place in early January 2017, around the time IC leaders briefed President Obama and President-elect Trump, on ‘the Christopher Steele information,’ a two-page summary of which was ‘enclosed in’ the highly-classified version of the ICA.”

Tapper, in a Twitter response to The Epoch Times on Sept. 2, said he hadn’t communicated with Clapper prior to his May 2017 interview with him.

“I never spoke to him or communicated with him in any way until I interviewed him on air in May 2017,” Tapper wrote.

On Jan. 10, 2017, CNN published the article “Intel Chiefs Presented Trump With Claims of Russian Efforts to Compromise Him.” The allegations within the dossier were made public, and with reporting of the briefings by intelligence community leaders, instant credibility was given to the dossier’s assertions. Immediately following the CNN story, BuzzFeed published the Steele dossier, and the Trump–Russia conspiracy was pushed into the mainstream.

On the following day, Jan. 11, 2017, in a stunning display of hypocrisy, Clapper issued a formal statement where he noted his “profound dismay at the leaks” and denied that the leaks came from within the intelligence community.

Update: This article was updated on Sept. 3, 2019, to include a statement from CNN host Jake Tapper.