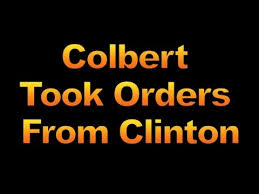 According to WikiLeaks, Stephen Colbert, was a major avenue for Clinton propaganda aimed at millennials as Hillary was preparing for her 2016 presidential run.
WikiLeaks revealed on Tuesday that Colbert and his team of writers were making episodes at the request of the Clinton Global Initiative in April 2013.
Craig Minassian of the CGI group, emailed John Podesta, the future manager of the Clinton 2016 campaign asking him to view two special episodes of The Colbert Report, the genesis of which came from the CGI group. The released email reads:
“I hope you got a chance to see the The Colbert Report’s two special episodes I had them do about CGI U that we taped in St. Louis this weekend.”
“This is the link to last nights with a sketch about commitments and the monologue and WJC (Bill Clinton) interview aired Monday. Hope you enjoy and looking forward to your feedback. Next will be your Colbert appearance!”