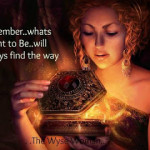 What do you intend to manifest? Knowing our thoughts create & are getting more intuned every day! Do you think a lot about chem-trails, Currency revaluation, what the government is doing or has done etc….. All these are the old paradigm & we don’t really want to re-create the same old thing or prolong the change now do we!! NO WE DON”T!!

We have been told that everything is transitioning as we go along! One People Public Trust transitioned to One People & this does not mean a movement! It just means One People all 7 Billion plus of us all as ONE!! All the tools that we have used like courtesy notices etc should also be left behind now unless someone needs them to hold the banks, legal system etc.. at bay. If we don’t really need them then lets just leave them as we don’t want the system to hang around! We want it to finish crumbling & the less attention we can pay to it the faster it will crumble! In fact we could almost blow it over now as it is that close to collapsing!!

Going to use my favorite little saying that means so much To me!!

On the summer solstice June 21st 2013 after all the portals & vortexes had been opened up there was a MASS AWAKENING & all eternal hearts suddenly remembered who they truly BE!! It was so BEautiful as neighbors were all hugging each other, laughing & giggling with tears of joy as they had all remembered they were all ONE & that all they wanted to do was LOVE each other!! Nobody even remembered what religion or racism was anymore!! There were no more language barriers as everyone was communicating from their hearts in the universal language of LOVE!! Everyone just shared what they had with each other.

In the twinkling of an eye all that was not organic simply vanished, all plastic was gone!! All the GMO foods magically transformed into wholesome natural foods. All herbicides & non organic fertilizers were gone! Everyone remembered their natural ability to sun gaze & that the digestive system was just for a backup system! All sickness & disease vanished as it was just an illusion caused by the control matrix!!

All borders & governments were gone!!! Every one was truly free absent limits & exercised self governance!!
I saw all the children of the world playing so happy as they all felt so safe now that all arms have been destroyed. Every person on Gaia is housed & has all the abundance that is their birthright!!

Our star family came down on  & were greeted with LOVING open arms & we all started cleaning up Gaia’s surface & atmosphere with their help!!

LET’S ALL BE THE CHANGE WE WANT TO SEE!!!

I LOVE YOU ALL VERY MUCH MY Si*STAR*s & BROTHERS!!
Pete Lysohirka