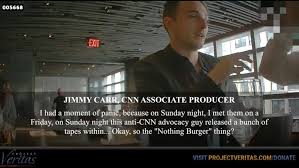 Carr was recently featured in Project Veritas’ American Pravda: CNN video series, stating that CNN thinks Trump is “f*cking crazy,” that Kellyanne Conway looks like she was “hit with a shovel,” and that the American voters are ‘stupid as sh*t.”

After seeing the first and second Project Veritas video which exposed CNN employees admitting the Russia narrative was “bullsh*t” and a “nothing burger,” Carr says he “had a moment of panic.”