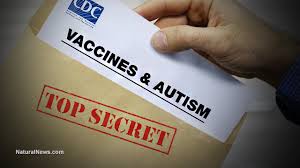 By Celia Farber, published on The Truth Barrier, on August 23, 2014

CNN is now overtly complicit in the mainstream media blackout of the developing story of CDC whistleblower Dr. William Thompson, who stepped forward and revealed that he had partaken in cooking data attempting to minimize the truth about the toxicity of the MMR vaccine in infants and the increased risk of developing autism.

Yesterday, on CNN’s “iReport” page, the story was posted.

As of late last night, the article had 45,232 views, 178 comments,( mostly people literally begging CNN and other media to cover it,) and a staggering 17 thousand shares.

This clearly is what we call “news worthy.”

However,  CNN has now deleted the story, claiming it was “flagged” for being “in violation” of iReport’s policy.

In violation of what?  CNN’s appeasement policies toward the vaccine industry?

CNN won’t allow the story of a whistleblower from a federal health agency who has admitted to falsifying a bedrock of data about vaccine safety, but it offered frothing, extensive coverage to Brian Deer’s claim’s that Dr. Andrew Wakefield’s 1998 Lancet paper was “fraudulent.” (The paper’s assertions–of a link between gastrointestinal illnesses, MMR, and autism– have subsequently been repeated in many other studies, and the paper’s lead author, who was funded to do to, went through the proper courts in the UK  and was vindicated.)

CNN’s frothing pro-vaccine coverage, and systematic bullying of critics, such as Dr. Andrew Wakefield, who was “interviewed” by an unhinged Anderson Cooper here, in one of journalism’s lowest moments, points to a very disturbing development in American journalism.

The $52 billion vaccine industry ship, meanwhile, mighty as it is, is taking on water from escalating leaks.

Who will jump next?

1 Comment to “ CNN Complicit in Media Coverup of CDC Whistleblower”