by Alexandra Bruce, published on Forbidden Knowledge, on December 9, 2016 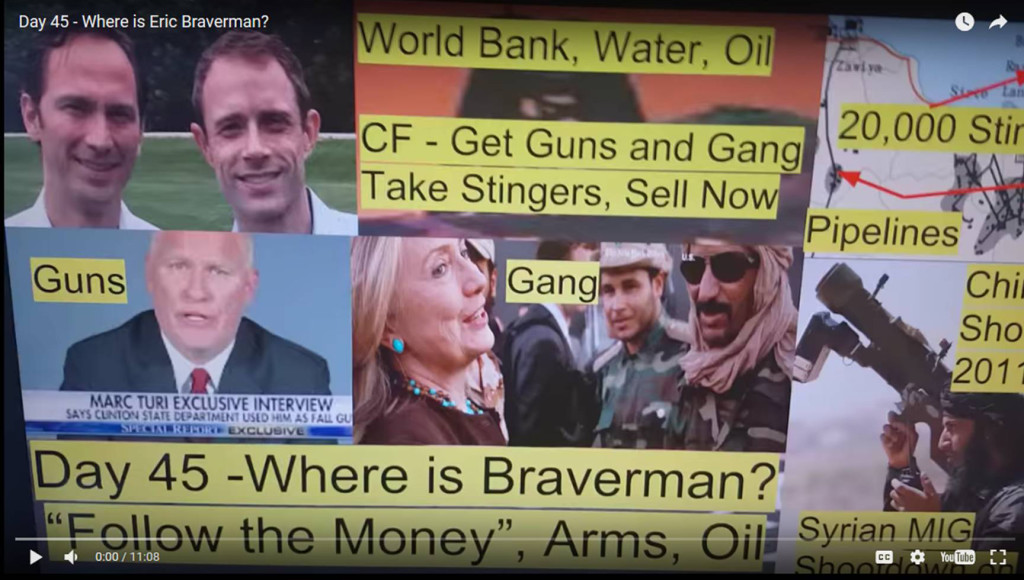 Former CEO of the Clinton Foundation, Eric Braverman has gone missing for over 46 days. His last tweet was on October 12, 2016.

Braverman was hired by Chelsea Clinton to “clean house” when she noticed highly irregular activities on the part of her parents was resented by the criminals installed there.

This video details the complex arms deals orchestrated, in part by Hillary Clinton, that helped to arm ISIS via Libya/”>Libya, in a triangle of guns, oil and drugs.

Braverman became a target of John Podesta and he apparently knew that his life was at risk, so he resigned. He never showed up for his new post as a professor at Yale University.

It was reported widely in the Alternative Media almost 2 months ago that Braverman has unsuccessfuly sought asylum in Russia but this story disappeared as utterly as he did.

This report from investmentwatchblog.com claims that Braverman is actually in Protective Custody with the FBI, in exchange for testimony against Clinton.

Marc Turi, the Phoenix, AZ-based arms dealer also saw himself being set-up by the Clintons to take the fall and he went to FoxNews with the story but soon disappeared and is currently presumed dead.

George Webb is doing a great job of staying on this story, by poring over the WikiLeaks emails to find clues as to the whereabouts of Clinton Foundation CEO, Eric Braverman, who’s been missing for 47 days at the time of this writing. Arizona arms dealer, also involved in this enormous racketeering scheme has also gone missing for about as long.

Taking Braverman’s tip to “Follow the money,” Webb is discovering a gigantic money-making machine, based on drug money, used to buy embargoed oil, to then sell it on the stock market and then you buy weapons and give them to your “friends” to invade a country.

Webb shows how Afghan heroin money is being used to invest in an operation to purchase and ship embargoed Syrian oil to Turkey by Prime Minister Erdogan’s son, Bilal, to then be re-sold on the market with the massive profits being “donated”/laundered through the Clinton Foundation.

Other key players include the CIA’s Mike Morrell, large US defense contractors, Saudi Arabia, Oman, the UAE, with Philippe Reines as the key fixer for the arms deals. The head-spinning corruption doesn’t stop there – you’ve got to watch this!

This story deserves MUCH more exposure!