Clinton Emails Were Leaked – Not Hacked

Clinton Emails Were Leaked – Not Hacked 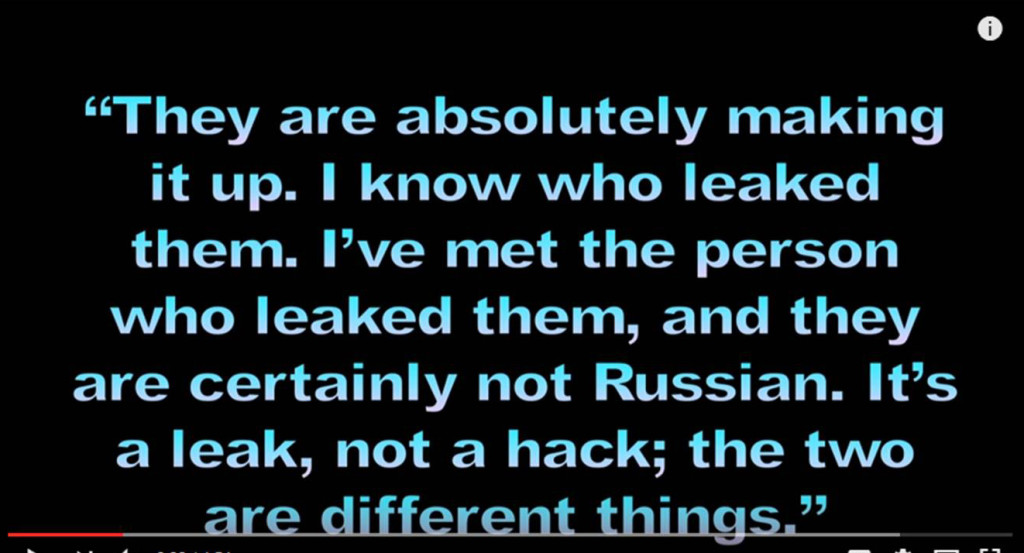 Visit our website now: http://www.billstill.com – considered by informed insiders’ as THE ultimate resource for fixing the National Debt problem and surviving Economic or Financial Collapse/Crash and attaining the unvarnished truth about Washington and today’s United States Political Climate.

Good evening, I’m still reporting on
Clinton Emails Were Leaked – Not Hacked
Good afternoon, I’m still reporting on the Clinton emails.
According to Craig Murray, the former UK ambassador to Uzbekistan, and a friend of missing in action, Julian Assange, the CIA’s claims that Hillary Clinton’s emails were hacked by someone close to the Russian leadership are not true.
“They are absolutely making it up. I know who leaked them. I’ve met the person who leaked them, and they are certainly not Russian. It’s a leak, not a hack; the two are different things,” said Murray.
“America has not been shy about arresting whistleblowers and it’s not been shy about extraditing hackers. They plainly have no knowledge whatsoever.”
“A little simple logic demolishes the CIA’s claims. They claim they ‘know the individuals’ involved.”
“We are supposed to believe that in the most vital instance imaginable, an attempt by a foreign power to destabilize a US election, … nobody is going to be arrested or extradited?”
A group of top former intelligence officials agree. Writing in yesterday’s Consortiumnews.com, the Veteran Intelligence Professionals for Sanity (VIPS), write that the spokespersons for agencies supporting this theory are equivocating in the extreme – using terms such as “our best guess”, or “our estimate”., etc.
This sort of equivocation means they don’t know, according to William Binney, NSA’s former: Technical Director of the World for the Geopolitical and Military Analysis and Reporting Group – THE top NSA technical person alive – a man who worked there for 37 years.
This is not some wannabe who is guessing. This is the guy who designed the system.
According to Binney:
“CIA is almost totally dependent on NSA for ground truth in the communications arena. Thus, it remains something of a mystery why the media is being fed strange stories about hacking that have no basis in fact.”
“The evidence that should be there is absent; otherwise, it would surely be brought forward, since this could be done without any danger to sources and methods. “
Such an insider could be anyone in a government department or agency with access to NSA databases, or perhaps someone within the DNC.”
Focusing back on a domestic source is exactly the last thing that John Brennan, head of CIA, wants to happen. If called to testify, NSA officials might point to the source being someone within the Democratic National Committee, such as their former Voter Expansion Data Director, 27-year-old Seth Rich.
Rich was found shot in the back multiple times on July 10th, about a block from his home 2 miles north of the U.S. Capitol building at 4:20 am – early on Sunday morning, after staying up all night at his job at the DNC. The killer did not take Rich’s wallet, watch or cell phone.
Julian Assange offered a $20,000 reward for info on who killed Rich and has insisted throughout that the DNC emails were not the result of a Russian hack.
According to IT professionals, late Saturday night into Sunday morning is the best time for a person to breach a data system to copy files without being noticed.
Assange has not been heard from since his last tweet on Nov. 6 – the Sunday before election day:
“Hey @Hillary Clinton, You have until Monday to drop out, or we will destroy you completely.”
DCI Brennan is playing a very dangerous political game with the reputation of the CIA that could easily backfire on both he and Clinton by shining light on an area that President Trump had agreed to ignore – that is a prosecution of Hillary Clinton. However, with former intelligence officials now rising up – Trump may have to open this back up – just for self-protection.
I’m still reporting from Washington. Good day.
Bill Still is a former newspaper editor and publisher. He has written for USA Today, The Saturday Evening Post, the Los Angeles Times Syndicate, OMNI magazine, and has also produced the syndicated radio program, Health News.