Claim made for hydrogen ‘wonder material’

Claim made for hydrogen ‘wonder material’ 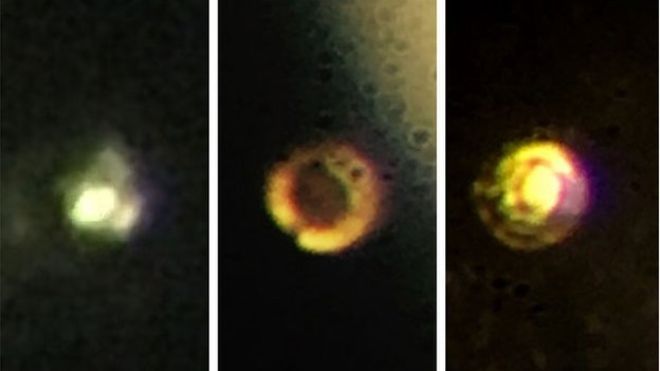 Smaller than the cross-section of a hair on your head: The tiny sample went from transparent, to black, to highly reflective as the pressure was increased. Becoming shiny and reflective is a sign the material has become a solid metal, the Harvard team claims

Scientists in the US say they have at last managed to turn hydrogen into a state where it behaves like a metal.

If that is true – and it is a controversial claim – it fulfils a more than 80-year quest to produce what many have said would be a wonder material.

Theory suggests metallic hydrogen could be used to make zero-resistance electrical wiring and super-powerful rocket fuel, among many applications.

Ranga Dias and Isaac Silvera are the Harvard researchers behind the work.

They report their experiments in this week’s Science Magazine.

The pair say the quantity of metallic hydrogen created so far is tiny – an amount less than the cross section of a human hair. But in time, they believe, ways could be found to boost its production.

Ranga Dias stands in front of the experimental set-up

Their laboratory approach – as is common in this field of study – was to squeeze a cell containing a small sample of molecular hydrogen between two synthetic diamonds.

In the Science paper, Dias and Silvera say this diamond anvil cell (DAC) achieved pressures up to 495 gigapascals.

That is the equivalent of sitting under almost five million Earth atmospheres. The DAC was also chilled down to close to minus 270 Celsius.

“The scepticism here is probably a good thing, in that it will drive many groups towards attempting to reproduce this experiment”

The intention was to pack the atoms of hydrogen so close together that they formed a crystal lattice and started to share their electrons – behaviour that is exactly that of a metal.

Dias and Silvera report that this state became obvious to them when the material in the diamond anvil cell developed the kind of lustrous surface so ubiquitous of metals.

“As we turned the pressure up, it went to a transparent molecular solid. And then as the pressure kept going up, it went black, and we think it goes black because it becomes like a semi-conductor and it can absorb light,” Prof Silvera recalled on the BBC’s Science In Action programme.

“And then we turned the pressure up higher and it started shining. It was very exciting. It’s got extremely high reflectance. The reflectance we measured is about 90%. It’s about the reflectivity of an aluminium mirror.” 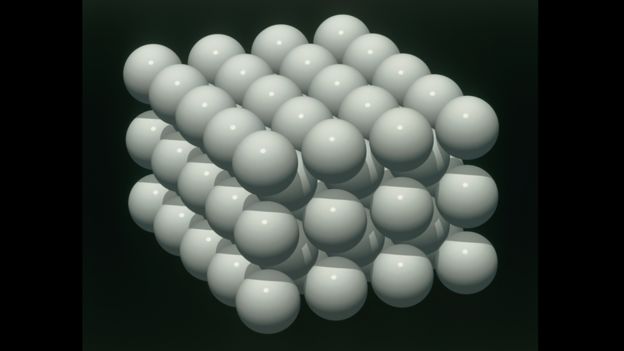 Artwork: In a metal, the atoms pack closely together in a lattice arrangement, which enables them to share their electrons. This is why metals make such good electrical conductors

It has to be said, however, that news of the Harvard experiment has already attracted a good degree of scepticism.

Other scientists working in the same and related fields have told the BBC that the team’s paper is short on the kind of data needed to make a proper assessment of its achievements.

“Complete garbage,” is how Eugene Gregoryanz from Edinburgh University described the research. “Like everybody else who works with hydrogen at high pressures, I am appalled by what is being published in Science.”

That there is so much scepticism is natural. If what is being claimed pans out, it would represent one of the major physics breakthroughs of recent decades.

Metallic hydrogen was first predicted more than 80 years ago, and there has been a race to create it ever since. That is because of the stunning properties that are promised.

It has been suggested for example that metallic hydrogen might be metastable; that is – once made under extreme conditions it would maintain its state even when brought back up to ambient pressures and temperatures.

And if, as some think, it is also a zero-resistance superconductor, that could lead to a revolution in the transmission and storage of electricity. For example, cables made from metallic hydrogen could feed energy across a country without the sort of electrical losses experienced in standard power grids.

The US space agency is also fascinated by the material. Already super-cold liquid hydrogen makes for a very powerful rocket propellant, but the dense metallic form of hydrogen promises to deliver really colossal levels of thrust that would enable huge payloads to be lifted off Earth.

But all this is in the realms of speculation for now. First, it must be shown that the Harvard work can be reproduced. If that’s possible – and some are saying that is a very big “if” – then more sizeable quantities of metallic hydrogen need to be created. 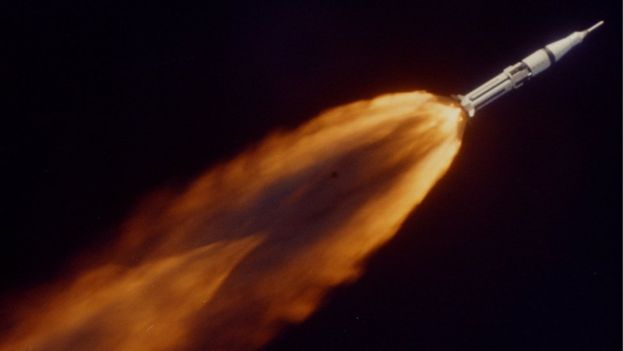 Metallic hydrogen would give a rocket prodigious capability

“I understand that others in the DAC community have been rather sceptical (arguing that the apparent reflectivity might be coming from contaminants in the sample, the aluminium oxide coating on the diamonds, etc.). However, if they really have achieved nearly 500 gigapascals in the DAC it is not unreasonable to have observed a transition to metallic hydrogen,” commented Marcus Knudson from Sandia National Laboratories.

“The scepticism here is probably a good thing, in that it will drive many groups towards attempting to reproduce this experiment. This publication will certainly incite the field. Again, if it holds up, this is an exciting result. I think in this case time will tell,” he told BBC News.

And Jeffrey McMahon from Washington State University concurred: “With respect to the tiny sample amount: Such experiments are performed in small diamond anvil cells. One challenge would be to make a larger quantity (at once); another, perhaps bigger challenge is to recover even the small sample (ie, remove it from the extreme pressures that it is under in the diamond anvil cell).

“Whether the latter is possible is an important open question.”