Gavin Seim pulls over a Grant County WA Deputy for an unmarked sheriff car violation.
See the details on the blog post… http://callmegav.com/2014/10/citizen-pulls-over-unmarked-police-gives-warning/ 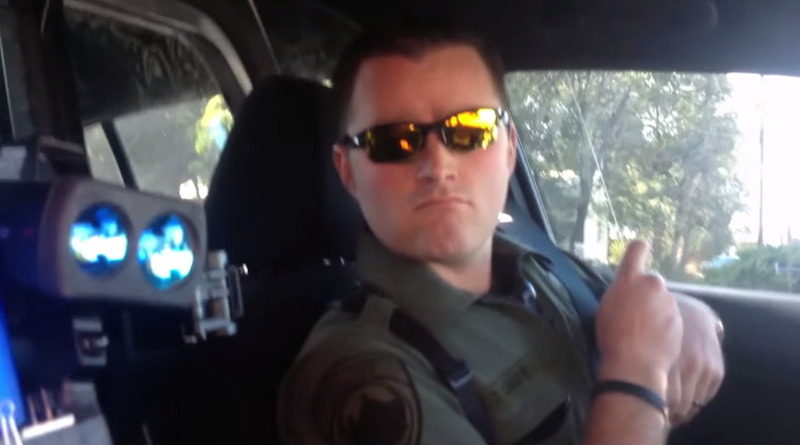 And the award for “Most Cop-Looking Cop” goes to…

Update: The sheriff is getting the cars marked. But its seems it’s only because we called him out. Listen to this interview and see what he says.

So I made this traffic stop today…

It’s very off the cuff. I had about 60 seconds from the moment I thought “NOW is the time to address this” and flagged the officer over, to the moment I was engaging him.

Email Sheriff Tom Jones (tjones@co.grant.wa.us) and ask him to get Grant County and it’s subordinate agencies in compliance with the law.

In Washington we have unmarked police vehicles impersonating citizens. If you think it’s not a serious issue, try asking those that have been raped or lost loves ones because of unmarked cars. It’s already illegal in WA for public vehicles to be unmarked, unless designated for “special undercover or confidential investigative purposes.” I’ll post the legal details and debunk the myths at the bottom. It’s also worth noting that this was not the first the Grant County Sheriff’s office heard about this. I called about a month ago and filed an official report addressing my concern with unmarked cars in the area.

Tolerating lawlessness does not fix anything and at this stage of our decline, neither does writing a letter. I get called every possible name for taking up the liberty conversation. Sadly many Americans hate America and hate liberty. But as in my courthouse incident, standing firm and principled works. If I’m dealing with a disrespectful tyrant, I put them in their place. It’s a matter of safety to never allow a bully to feel they can intimidate you. We can stand up them. — Thankfully that was not a problem today because Deputy Canfield handled this well. I informed him of the law and and he now has the opportunity to fix it. — I want officers to treat people with respect and I in turn do the same. Disrespectful public servants should never be tolerated, respectful ones should be commended.

Ordinary looking unmarked police cars slink around and entrap, so they can write folks up (read tax) for petty faults. That’s not protecting. As my brother Blake says, “serve and protect, not harass and collect.” — But this is also a major safety issue. Unmarked vehicles are a ripe opportunity for confusion in a citizens reaction and for criminals to impersonate lawful authority to get people to stop.

People have been raped and even murdered because of this, so the law is good sense. In WA, all municipal and police vehicles must be marked UNLESS they fall under special exemptions. These exemptions do not apply to patrol vehicles. There’s even a past WA State court precedent where a man fled police and his felony charge was thrown out because the pursuing vehicle was not legal. Pretty interesting. There have also been traffic infractions thrown out because the officers car was not marked.

Ask yourself. Do you want your sisters and daughters stopped on the road, not knowing if they are facing an officer or a killer until it’s too late?

Check the laws in your State and if you see an unmarked vehicles running around your community, go question your officers. If it’s a local police unit and they refuse to comply, report the offense to your County sheriff who is responsible to make sure the law is followed. In this case we have local police, Sheriff and State police violating our law, so we have work to do. If there is no law in your State, call your legislator and demand that it be addressed for the safety of our roads.

If you’re stopped by an unmarked vehicle I would not suggest running. But don’t pull over on a dark lonely street either. Indicate to the officer that you see him, drive to an occupied well lit area like a gas station. You can also dial 911 and confirm if the officer at your location is legit. And if you question that an officer might now not be who he says he is, don’t be afraid to demand ID. We have a right to be safe on our streets.

Finally, ALWAYS film the encounter. I cannot stress this enough. If you stand your ground, stand principled and film everything, you will be much safer than cowering before lawless authority. It’s our job to police the government. We the people have all the authority and we must hold them accountable. I wrote an article here with some tips on filming police.

Small issues lead to big ones. This is not simply about unmarked cars. It’s about accountability and a government that respects and obeys the people, their rights and the law. We are losing our country America, but if we all stand up we can take it back. Liberty is not the fringe. It’s the foundation.

UPDATE 10/21/14: I went in yesterday  to setup an official meeting with Grant County Sheriff Tom Jones so we could address compliance with State law and have an open dialogue. 15 minutes after I set the meeting, I received a message from his office saying he WILL NOT allow recording and there will be NO MEETING if I’m recording. We showed up anyways for the meeting and he met with us in the lobby.

The government apologists have been working to convince people this law does not apply to police. This is ridiculous since that’s the main point of the law, but I want to take it on with facts. Kevin Schmadeka actually started this conversation back in 2011 and there’s a good fact sheet on it here.

Here is the text of 46.08.065. But the legal spin machine is suggesting that the law does not apply to any police officer because if the this text in section (1)

“This section shall not apply to vehicles of a sheriff’s office, local police department, or any vehicles used by local peace officers under public authority for special undercover or confidential investigative purposes”

MYTH: The spin machine asserts that since the word “OR” is in the sentence it must therefore separate the structure. They assert that exempt vehicles include “sheriff AND “local police” AND “local peace officers” undercover. While it can be a tad confusing when you think about it, it does not take an expert linguist to debunk this lie and it would never stand in court. The wording is actually clear.

FACT: “undercover or confidential investigative” requirement applies to all the vehicles in that sentence. Why? If that sentence did in fact cover two separate categories of vehicles, they would be noted with an (a) and a (b). This is how RCW’s are written and it’s done in the very next sentence which reads: “This subsection shall not apply to: (a) Any municipal transit vehicle operated for purposes of providing public mass transportation; (b) any vehicle governed by the requirements of subsection (4).” When clear separation is worded in, it’s made very clear.

If understanding the English context is not enough, the laws it’s intent can be traced back to the memos of the bill written my the legislative auditor of Washington State. Here is how he summarized this legislation..

“The bill is intended to provide better public visibility of government owned vehicles and to provide a means for more efficiently marking vehicles operated by the state and units of local government, ..A vehicle marking exemption for vehicles used by sheriffs, local police and local peace officers is continued but is limited to vehicles used for undercover or confidential investigative purposes.” — Legislative Auditor Thomas R. Hazzard, in a memo dated January 31, 1975.

Some also suggest that State Patrol (WSP) can exempt any car they want, because there is a note in section (3) that states ” Traffic control vehicles of the Washington state patrol” may be exempted by the chief. Note that this section is only for WSP. But it still does not exempt them. Traffic Control Vehicles are not and have never been patrol cars. They are the vehicles that do things like guide you through a Construction Zone. The WSP picked up on this as a way to break the law and convince people they were not. Sadly we have allowed them to get away with it.

This law was instituted in 1937. It was a one section law that applied to all agencies equally. Then, there was no exception but for “special or general police purpose”. That description was clarified in the 1975 alteration to define the exemption as “special undercover or confidential investigative purposes“. Here is the original text of the law, found in chapter 189 of the 1937 session laws.

Sec46: It shall be unlawful for any public officer having charge of any vehicle owned by the State of Washington or by any county, city, town or other public body in this state and used in public business to operate the same upon the public highways of this state unless and until there shall be painted upon such automobile or other motor vehicle in letters of contrasting color not less than two (2) inches in Public vehicles, name of department. height in a conspicuous place on the left side thereof, the words “State of Washington” or the name of such county, city, town or other public body, together with the name of the department or office upon the business of which the said vehicle is used: Provided, Exceptions. This section shall not apply to vehicles of the Washington State Patrol, sheriff’s office, police department, or any vehicles used by peace officers under public authority for special or general police purpose : Provided, It shall be lawful and constitute compliance with the provisions of this section for any department or office to adopt and use in lieu of the lettering required a distinctive insignia, approved by the state commission on equipment, and bearing substantially the same information as required herein.

In 1975 the law added sections, making different restrictions for State vehicles versus local or County vehicles. The use of the language when taken in it’s simple original form clearly illustrated the meaning. The use of OR is not defining all officers as exempt at all. That it would would defeat the primary intent of the law and conflicts with even the current version and structure. You can find all revisions in the WA State Session Laws.

The bottom line is that the law is clear and to suggest that any of it’s text exempts local police and sheriffs entirely is ridiculous and denies the grammatical structure of American English, the text of the bill and the published intent of the bill.