According to Mandy O’Brien, a body language analyst who calls herself “Dr. Bombard,” during Christine Blasey Ford’s testimony before the Senate Judiciary Committee hearing yesterday, her body language indicates she was using her emotional demeanor to influence and manipulate.

As you watch the video below, just remember that, contrary to her little-girl voice and demeanor, Christine Blasey Ford:

But we are to believe that this highly-educated, 52-year-old professor did not know:

Here are some specific points made about Ford’s body language:

(1) Hard swallow and beady eyes darting and scanning the room while holding her head high in one position suggests the nervous look is contrived.

(2) Repeatedly opening her mouth like a fish gulping for air indicates “something is neurologically wrong with her…because that’s not normal behavior”.

(2) Repeatedly opening her mouth like a fish gulping for air indicates “something is neurologically wrong with her…because that’s not normal behavior”.

When committee chairman Sen. Chuck Grassley (R-Iowa) said that the individuals whom Ford alleges to be eyewitnesses of the alleged assault all denied any knowledge of the assault or even of the party, Ford instantly switched from her nervous, vulnerable little-girl demeanor to arrogantly tilting her head high, looking down on the committee members. Who does that at a U.S. Senate hearing? That is her true face. 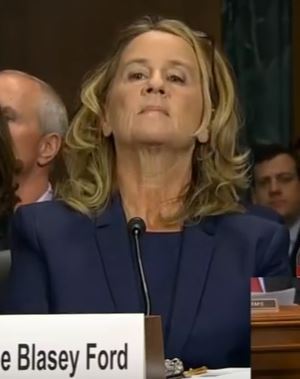 (4) Ford described the alleged assault in a choked voice for several minutes, during and after which there was no mucus and no tears.

Christine Ford’s writing…is a combination of “writer/printer” which some use in the math field. However, those writers/printers have clear, well-formed and easy to read writing, which Ford severely lacks in her writing. She clearly wants no connection to the past, which is evidenced in her “right hand column writing”. She strays from being on task, and has forgetfulness. There’s a lot of “scratching over” strokes, which is what some of us term as “litter box scratching”. There’s obvious signs of addiction, sometimes, it’s drugs, alcohol, sexual or something totally out of control in a person’s life. There is a clear disconnect in what she is thinking vs. what she is writing. Although, I don’t have the original writing, I’d safely venture to say “she has misplaced pressure throughout the writing, which borders on severe mood swings. She is trying to stay in control by writing in an AB slant (controlled writing) but in some areas there is a “severe abnormal left slant” as though she is falling over backwards. The body of her writing which is frozen in the AB slant does not match with her signature, which means she wants to appear one way to the world, but not in reality. She wants to appear friendly and warm to others, but isn’t. She is a middle zone writer, which means she’s only concerned with the here and now and lives for the moment. Overall impression is that her writing is poorly integrated, choppy, not free flowing, scratched over, she has some rebellion in her strokes and is stubborn. She also lacks high self-esteem and for a person who is in education, she certainly has low goals, as witnessed with the very low “t” crossings, poorly formed thinking letters “m’s and n’s”. It’s not just one trait that is measured in HA, it’s collectively analyzed. She is someone though, that probably wants her own way, seen in many threaded strokes in her writing. She is careful not to divulge too much about herself on a personal level. Her writing lacks logic, most of all, and does show addictive behavior that is not beneficial. We analysts have also seen this in those who’ve beaten addiction, but still live with the residual damages, which is recorded in the brain. Handwriting is indeed brain-writing.

Referring to Ford’s number zero (0) in “2018”, which contains a small oval, her not dotting i’s, and her low-cross t’s, Springer explains:

Loops inside ovals or hanging jabbed marks on ovals, indicates lying. If seen throughout the writing, it is pathological lying, also seen in self-absorbed narcissists. When ovals are inside ovals and there’s a lot of threading (imagine a long thread) the person is not truthful. Scratching throughout a writing, if there’s no brain damage, is deception. We call it the litter box scratch and we all know why cats scratch litter. If an oval is looped on both sides (imagine hair parted in the middle with bangs hanging on each side) indicates big liars. Those who forget to dot i’s, cross t’s and have cover strokes in small “m’s and n’s” are secretive and they can play people.

Recall that little-girl Ford had deleted all her social media BEFORE she went public that she’s the author of the accusatory letter Sen. Dianne “my personal driver of 20 years is a Chinese spy” Feinstein forwarded to the Justice Department. The deletion of her social media is another indication of her “careful not to divulge too much of herself”, “secretive”, and “deception”. What was contained in her social media we’ll never know.