Chinese Chemists Create Printer That Uses Water Instead of Ink

Chinese Chemists Create Printer That Uses Water Instead of Ink 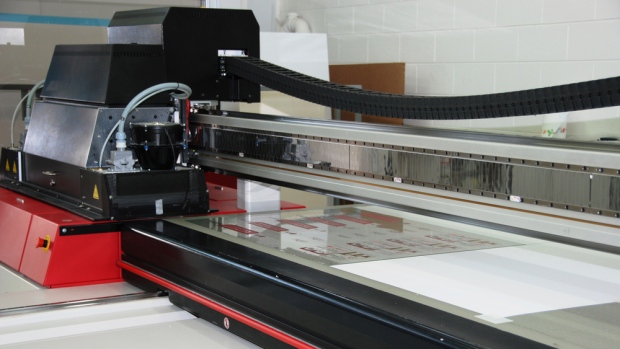 PARIS (AFP) – Like any ordinary printer, a team of chemists have revealed a machine that ingests a blank page and spits it out covered in print. But instead of ink, it uses only water. And the used paper fades back to white within a day, enabling it to be reused.

A team of chemists claims their “water-jet” technology allows each page to be reprinted dozens of times — a money- and tree-saving option in a digital world that still relies heavily on hard copy.

“Several international statistics indicate that about 40 per cent of office prints (are) taken to the waste paper basket after a single reading,” said Sean Xiao-An Zhang, a chemistry professor at Jilin University in China, who oversaw work on the innovation.

The trick lies in the paper, which is treated with an invisible dye that colours when exposed to water, then disappears.

The print fades away within about 22 hours at temperatures below 35 degrees Celsius as the water evaporates — quicker if exposed to high heat, Zhang and a team wrote in a paper describing their invention in the journal Nature Communications.

The print is clear, claim the designers, and the technology cheap.

“Based on 50 times of rewriting, the cost is only about one perc ent of the inkjet prints,” Zhang said in a video on the Nature website.

Even if each page was re-used only a dozen times, the cost would still be about one-seventeenth of the inkjet version.

Sean said dye-treating the paper, of the type generally used for printing, added about five percent to its price, but this is more than compensated for by the saving on ink.

Crucially, the new method does not require a change of printer but merely replacing the ink in the cartridge with water, using a syringe.

“Water is a renewable resource and obviously poses no risk to the environment,” said the study.

Previous work in the quest for a disappearing ink has tended to yield a low-contrast print, often at a high cost, and sometimes using hazardous chemicals.

Zhang and his team used a previously little-studied dye compound called oxazolidine, which yielded a clear, blue print in less than a second after water was applied.

They have managed to create four water-printed colours so far — blue, magenta, gold and purple — but can only print in one hue at a time, for now.

The next step is to improve both the resolution and the duration of the print.

They are also working on a machine that will heat pre-printed sheets of paper as they are fed into the machine, fading the pages instantaneously for re-printing.

At 70 C, the colour disappears within about 30 seconds.

Zhang said the dyed paper was “very safe” but toxicity tests are underway on mice to be sure.