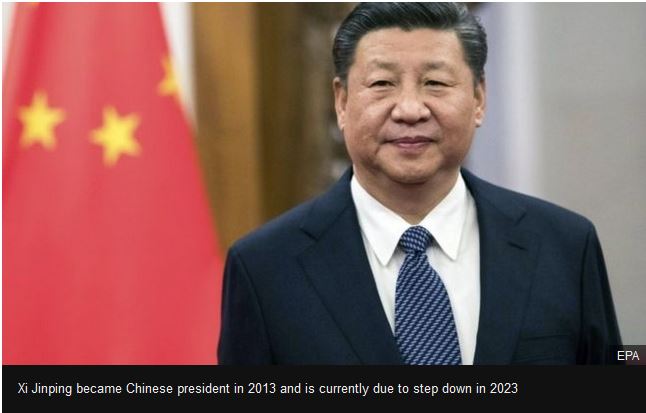 China’s governing Communist Party has proposed removing a clause in the constitution which limits presidencies to two five-year terms.

The move would allow the current President Xi Jinping to remain as leader after he is due to step down.

There had been widespread speculation that Mr Xi would seek to extend his presidency beyond 2023.

The party congress last year saw him cement his status as the most powerful leader since the late Mao Zedong.

His ideology was also enshrined in the party’s constitution at the congress, and in a break with convention, no obvious successor was unveiled.

Born in 1953, Mr Xi is the son of one of the Communist Party’s founding fathers. He joined the party in 1974, climbing its ranks before becoming president in 2013.

His presidency has seen economic reform, a fierce campaign against corruption, as well as a resurgence in nationalism and a crackdown on human rights.

The announcement was carried on state news agency Xinhua on Sunday.

“The Communist Party of China Central Committee proposed to remove the expression that the President and Vice-President of the People’s Republic of China ‘shall serve no more than two consecutive terms’ from the country’s Constitution,” it reported.

It gave no other details, but the full proposal was due to be released later.

The announcement appears carefully timed, with many Chinese people due to return to work on Monday after celebrating the Chinese New Year. China was also centre stage at the closing ceremony of the Winter Olympics, as South Korea prepared to hand the Games over to Beijing for 2022.

The top officials who make up the party’s Central Committee are due to meet on Monday in Beijing.

The proposal must be approved by China’s parliament, the National People’s Congress, which begins its annual meeting on 5 March but most expect this to be a formality.

How significant is this?

Under the current system, Mr Xi was due to step down in 2023.

The tradition of limiting presidencies to 10 years emerged in the 1990s, when veteran leader Deng Xiaoping sought to avoid a repeat of the chaos that had marked the Mao era and its immediate aftermath.

Mr Xi’s two predecessors have followed the orderly pattern of succession. But since he came to power in 2012 he has shown a readiness to write his own rules.

It is not clear how long Mr Xi might stay in power, but an editorial in China’s state-run Global Times said the change did not mean “that the Chinese president will have a lifelong tenure”.

The paper quoted Su Wei, a Communist Party academic and party member, as saying it was a significant decision as China needed a “stable, strong and consistent leadership” from 2020-2035.

But the prospect of further removing restraints on Mr Xi’s power has alarmed some observers. “I think he will become emperor for life,” Willy Lam, politics professor at the Chinese University of Hong Kong, told AFP news agency.

This is an announcement many have been expecting.

For decades, the Communist Party has dominated life in China. Now, Xi Jinping has stepped into that spotlight, outshining the party that promoted him to the top spot.

His photo is plastered on billboards across the country and his authorised nickname, “Papa Xi”, appears in official songs.

In the past the Communist Party stayed firmly in control, while the man at the top was in command for a limited amount of time. One leader would dutifully hand power to another after serving a decade in power.

Xi Jinping disrupted that system from the early days of his time in office. He instituted an anti-corruption campaign, the same campaign that conveniently eliminated Mr Xi’s political rivals.

Mr Xi has also shown a clear political vision, promoting huge national projects like the One Belt One Road initiative to build new global trade routes and announcing grand plans for China to erase poverty by 2020.