CHEMTRAILS Addressed At The UNITED NATIONS

CHEMTRAILS Addressed At The UNITED NATIONS 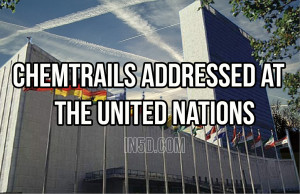 After years of denial of chemtrails by the U.S. government, the topic of chemtrails was finally discussed at the United Nations. Rosalind Peterson, California President and Co-Founder of the Agriculture Defense Coalition (ADC), addressed the United Nations regarding the dangers of chemtrails. Additionally, Peterson discussed man-made warming and the change and impact of agricultural crop production along with the chemical detriments of the toxic ingredients in the chemtrail composition.

Chemtrails are a form of aerial dispersal of toxic chemicals which not only affect the ability of the sun to reach the planet, thus causing global warming, but also weakens our immunity systems through its cocktail of harmful ingredients, such as barium sulfate, strontium, and aluminum.  A chemtrail will linger and expand in the sky, lasting up to 20 hours.

Through what Peterson calls “Global Dimming”, solar power is reduced by chemtrails, which reduces photosynthesis, and in turn will ultimately impact agriculture.

Peterson stated, “If you take and put up into our skies chemicals to reduce the amount of sunlight reaching the Earth, you are going to begin to reduce crop production.  Studies at the University of Illinois on crop production show reductions.  Without the process of photosynthesis, whereby plants from direct sunlight gain the energy to grow to produce crops, we’re going to find ourselves, if we mitigate in that direction, impacting the crop production, not only here in the United States, but worldwide.”

One of the slide Peterson presented to the United Nation showed the acknowledgement of chemtrails by NASA, calling them “Persistent Jet Contrails”. 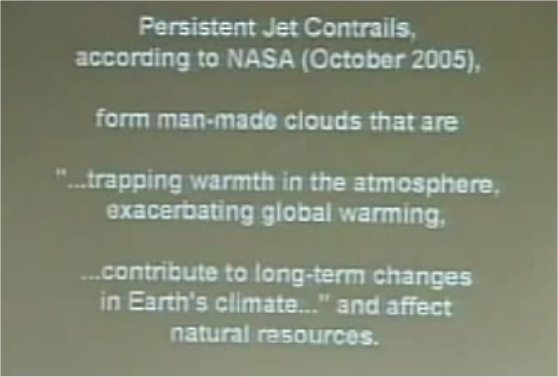 While jets have been flying the skies since the 1940’s, it wasn’t until recently that this new term of “Persistent Jet Contrails” has arisen.  Why?  Because they didn’t exist until the 1980’s, when chemtrails started to become prevalent.  Through activism and researchers such as Dane Wigington, chemtrails are acknowledged by many people as a means for both global warming and depopulation by the globalists.

These chemicals, according to Peterson, have shown up in the State Department of Health drinking water tests examined between 1970 and this year and include a spike in the amounts of barium, aluminum, strontium, magnesium, calcium, and manganese, all of which spiked at the same time in both California and Arizona.

Gregg Prescott, M.S. is the founder and editor of In5D and BodyMindSoulSpirit. He hosts a weekly spiritual show on In5D Radio and promotes spiritual, metaphysical and esoteric conferences in the United States through In5dEvents. His love and faith for humanity motivates him to work relentlessly in humanity’s best interests 12-15+ hours a day, 365 days a year. Please like and follow In5D on Facebook as well as BodyMindSoulSpirit on Facebook!