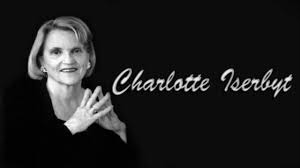 Charlotte Thomson Iserbyt served as the head of policy at the Department of Education during the first administration of Ronald Reagan. While working there she discovered a long term strategic plan by the tax exempt foundations to transform America from a nation of rugged individualists and problem solvers to a country of servile, brainwashed minions who simply regurgitate whatever they’re told.

Exclusive interview with Iserbyt breaks down how conditioning/training under a corporate agenda has replaced traditional education, leading to a deliberate dumbing down of Americans. Iserbyt further explains how Reagan signed agreements merging the U.S. and Soviet systems under the United Nations banner, turning over education and many other areas of public policy to global control.

This is a must see for anyone who wants to truly know why the education system is deliberately crafted to produce human drones with no critical thinking whose only skills are to be subservient, trust authority and follow orders.

Her book,’The Deliberate Dumbing Down of America’ is free at
http://www.deliberatedumbingdown.com