Charges Against Bundys in Ranch Standoff Case Are Dismissed

Charges Against Bundys in Ranch Standoff Case Are Dismissed

By KIRK JOHNSON, published on The New York Times, on January 8, 2018 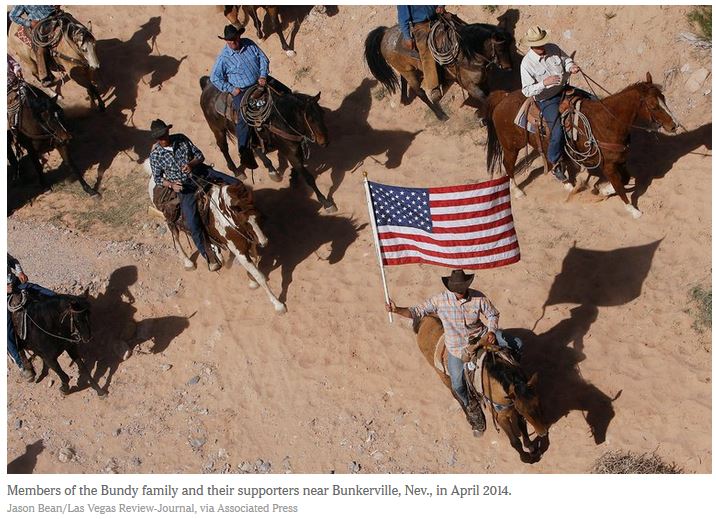 A federal judge in Las Vegas dismissed charges against Cliven Bundy and his sons, Ammon and Ryan, on Monday.

Judge Gloria M. Navarro of Federal District Court, in a ruling from the bench, said that the government’s missteps in withholding evidence against the three Bundy family members and a supporter, Ryan W. Payne, were so grave that the indictment against them would be dismissed.

The decision could be appealed by prosecutors. But they would only be able to bring charges again if they won the appeal and the ruling was reversed — and they then got a new indictment from a new grand jury.

Judge Navarro declared a mistrial last month in the case, stemming from an armed standoff at the Bundy ranch in 2014 that had arisen over land-grazing fees. She said then that prosecutors had erred in failing to turn over important evidence to the defense, including video taken surreptitiously within the ranch during the standoff, and evidence that F.B.I. agents were involved in the incident.

Her decision on Monday to throw out the case shattered a longstanding government effort to portray the Bundy family members as violent extremists, but also undermined in many ways a core argument by Cliven Bundy, 71, and his sons that the federal government had become an omnipotent force of police power and that opponents to federal land policies would be crushed.

The 2014 standoff, the focus of Monday’s hearing, was set off when the Bureau of Land Management seized cattle from Cliven Bundy’s ranch in Bunkerville, Nev., in an attempt to force him to pay decades of back fees for grazing his cattle on federal land. Mr. Bundy insisted he did not have to pay the charges because, he said, he had inherited water rights on the land. At the height of the standoff, hundreds of antigovernment activists, many of them carrying guns, rallied to the Bundys cause, until the confrontation ended with the withdrawal of federal agents. 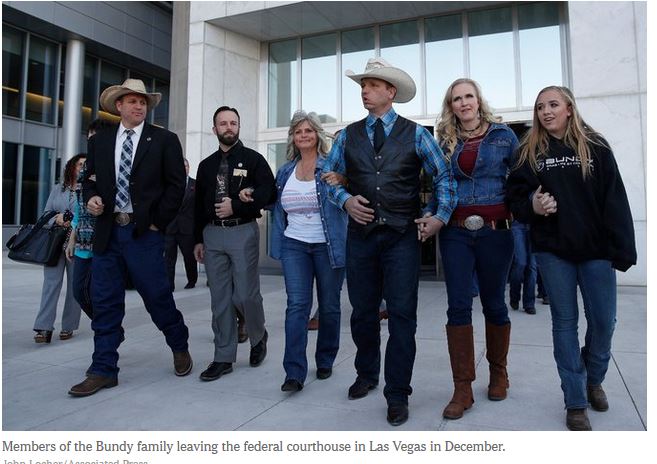 In the years since, the family became even more firmly entrenched in the deep and bitter debate over public land policy in the West — seen either as right-wing extremists or stalwarts in standing up against federal government overreach, depending on whom you asked. And the Bundys also became symbols of law enforcement failure, as prosecutors, through multiple trials, failed for the most part to convince juries that the family members and their followers, beyond their armed militance, were criminals.

Ammon and Ryan Bundy and five of their followers were acquitted by a federal jury in October 2016 on all charges related to their takeover of the Malheur National Wildlife Refuge in Oregon earlier that year. Last August, another federal jury, in Nevada, declined to convict four men who were involved in the Bundy ranch standoff, and earlier this year a jury in Oregon split on charges against four men in the Malheur takeover — convicting two of conspiracy charges but acquitting two others.

After Judge Navarro’s ruling in December that prosecutors had withheld evidence in the ranch standoff that might have helped the defendants — including video taken surreptitiously within the ranch — prosecutors said in their court filings that fears of violence against witnesses were part of their decision-making in what evidence to release.

“As a result of threats to witnesses and the speed at which personal information can spread on social media, the government concluded it could not simply turn over its entire database,” prosecutors wrote in a brief before Monday’s hearing. “Failure to disclose the information underlying the court’s mistrial order was due, in a few instances, to simple inadvertence, but in the overwhelming majority of instances to a good-faith,” they said.

The defense team said prosecutors had violated due process rules and undermined the entire case, which they said could not now properly be retried. Prosecutors are also still facing an inquiry begun last month by Attorney General Jeff Sessions after Judge Navarro’s mistrial order.

Daniel Hill, a lawyer representing Ammon Bundy, said that if prosecutors decided to appeal the decision, they would have to overcome what he described as a detailed, point-by-point rebuke by the judge, which took her about half an hour to read from the bench.

“It was the most unwavering, clear-cut and almost personal dismissal that I’ve ever heard in federal court,” he said. “I am very confident of the concreteness and airtightness of Judge Navarro’s findings.”