By Phoenix Capital Research, published on Zerohedge.com, on February 19, 2015 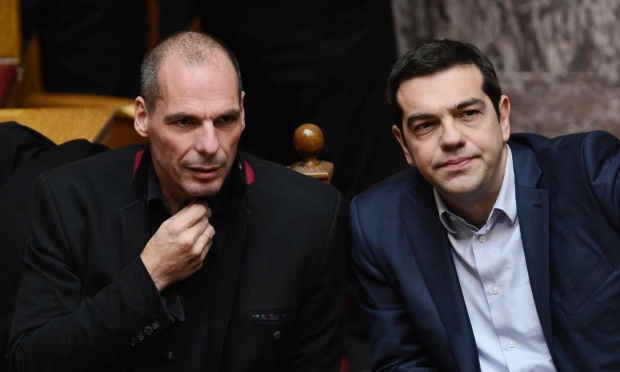 The situation in Greece boil down to the single most important issue for the finacial system, namely collateral.

Modern financial theory dictates that sovereign bonds are the most “risk free” assets in the financial system (equity, municipal bond, corporate bonds, and the like are all below sovereign bonds in terms of risk profile). The reason for this is because it is far more likely for a company to go belly up than a country.

Because of this, the entire Western financial system has sovereign bonds (US Treasuries, German Bunds, Japanese sovereign bonds, etc.) as the senior most asset pledged as collateral for hundreds of trillions of Dollars worth of trades.

Indeed, the global derivatives market is roughly $700 trillion in size. That’s over TEN TIMES the world’s GDP. And sovereign bonds… including even bonds from bankrupt countries such as Greece… are one of, if not the primary collateral underlying all of these trades.

Lost amidst the hub-bub about austerity measures and Debt to GDP ratios for Greece is the real issue that concerns the EU banks and the EU regulators: what happens to the trades that EU banks have made using Greek sovereign bonds as collateral?

This story has been completely ignored in the media. But if you read between the lines, you will begin to understand what really happened during the previous Greek bailouts.

1)   Before the second Greek bailout, the ECB swapped out all of its Greek sovereign bonds for new bonds that would not take a haircut.

2)   Some 80% of the bailout money went to EU banks that were Greek bondholders, not the Greek economy.

Regarding #1, going into the second Greek bailout, the ECB had been allowing European nations and banks to dump sovereign bonds onto its balance sheet in exchange for cash. This occurred via two schemes called LTRO 1 and LTRO 2 which happened in December 2011 and February 2012 respectively. Collectively, these moves resulted in EU financial entities and nations dumping over €1 trillion in sovereign bonds onto the ECB’s balance sheet.

Quite a bit of this was Greek debt as everyone in Europe knew that Greece was totally bankrupt.

So, when the ECB swapped out its Greek bonds for new bonds that would not take a haircut during the second Greek bailout, the ECB was making sure that the Greek bonds on its balance sheet remained untouchable and as a result could still stand as high grade collateral for the banks that had lent them to the ECB.

So the ECB effectively allowed those banks that had dumped Greek sovereign bonds onto its balance sheet to avoid taking a loss… and not have to put up new collateral on their trade portfolios.

Which brings us to the other issue surrounding the second Greek bailout: the fact that 80% of the money went to EU banks that were Greek bondholders instead of the Greek economy.

Here again, the issue was about giving money to the banks that were using Greek bonds as collateral, to insure that they had enough capital on hand.

Piecing this together, it’s clear that the Greek situation actually had nothing to do with helping Greece. Forget about Greece’s debt issues, or protests, or even the political decisions… the real story was that the bailouts were all about insuring that the EU banks that were using Greek bonds as collateral were kept whole by any means possible.

This is why the current negotiations in Greece boil down to one argument: whether or not it will involve an actual restructuring of Greek debt that will affect bondholders across the board.

Greece wants this. The ECB and EU leaders don’t for the obvious reasons that any haircut of Greek debt that occurs across the board will:

2)   Be immediately followed by Spain, Italy and ultimately France asking for similar deals… at which point you’re talking about over $3 trillion in high grade collateral being restructured (collateral that is likely backstopping well over $30 trillion in derivatives trades at the large EU banks).

Remember, EU banks as a whole are leveraged at 26-to-1. At these leverage levels, even a 4% drop in asset prices wipes out ALL of your capital. And any haircut of Greek, Spanish, Italian and French debt would be a lot more than 4%.

The next round of the great crisis is coming. The ECB bought two years of time with its pledge to do “whatever it takes,” but the global bond bubble is still going to burst. And when it does, it’s going to make 2008 look like a joke.

If you’ve yet to take action to prepare for the second round of the financial crisis, we offer a FREE investment report Financial Crisis “Round Two” Survival Guide that outlines easy, simple to follow strategies you can use to not only protect your portfolio from a market downturn, but actually produce profits.

You can pick up a FREE copy at:

1 Comment to “ Central Bankers’ Worst Nightmares Are Unfolding in Greece”