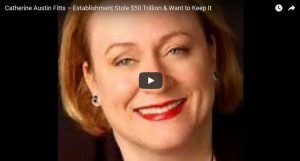 Money manager Catherine Austin Fitts says, “The establishment has stolen $50 trillion plus, and they want to keep it, and they want to invest it in the space based economy and not have to give it back to the pension funds. One of the most important techniques they are going to use to do that is basically with digital control, with both of the currency, as well as the systems that do surveillance and control. So, (they think) if we can get 7 billion people on smart phones and 5G coming in from satellites or land, anyway you do it, and everybody has a digital currency, and if you don’t behave, you turn off their currency.

We are talking about ways of controlling people through the digital systems which are very, very invasive. . . . If you look at the policies going on, whether it’s the effort to bring in the guns or effort to force cashless, those who are centralizing control of the economy, they want to make sure they have control because when they invest that money, they want to make sure it makes their wealth go up and not the general population’s wealth go up. They don’t want to have to refund those monies back into the pension funds or Social Security. They want to be able to say, well, the money is gone, and we spent too much of it and did not balance the books and etcetera, etcetera. So, this is what this is about. This is about who is going to allocate what resources that are there, and are they going to be in a position to harvest and drain the American taxpayer.”