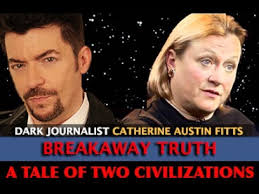 The Deep Interview
In this exciting special episode, Dark Journalist Daniel Liszt welcomes back Former Assistant Secretary of Housing and Urban Development Catherine Austin Fitts. Catherine is the President of The Solari Report, a quarterly journal and website that integrates economic trends with a larger geopolitical picture.

Ascent of the Black Budget Underworld
Catherine sees the forces vying for power in the 21st century as a combination of Black Budget underworld with its covert influence in drug running, money laundering and high finance, and the robotic, transhumanist corporate culture that is attempting to create a new kind of digital slavery.

In either case, the public civilization is only vaguely aware of the impact of these forces on their daily lives. In everyday living in modern society, an average person doesn’t often get the opportunity to see the massive plan being brought to bear for the global dominance of a worldwide smartgrid capable of cataloging every person according to its harvesting algorithm.