CATALONIA is preparing to declare independence in “a matter of days” despite the Spanish king strongly rejecting the referendum result last night. After Catalans took to the streets in protest against the police brutality on Sunday, here are live updates and the latest news.

Here are live updates and the latest news on the ongoing crisis in Spain. (All times BST)

6.16pm: Catalonia turmoil rattles Spanish marketsThe mounting threat of Catalan independence has spooked Spanish business leaders, with some already making plans to leave the region if it splits from Spain.Shares in Caixabank and Banco Sabadell, which are headquartered in Catalonia, have plummeted by more than five per cent according to the Financial Times.Experts fear that Spain’s regional economy could shrink by 30 per cent if Catalonia gains independence. 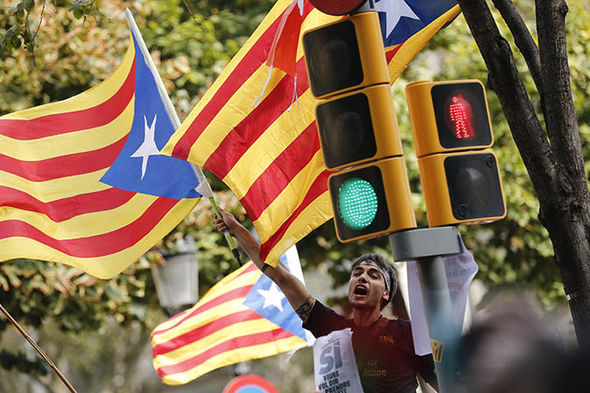 4.17pm: EU calls for Spanish and Catalan governments to open a dialogue The European Commission’s First Vice President Frans Timmermans told the European Parliament that it is time for the Spanish and Catalan governments to “talk”.Mr Timmermans backed Madrid’s position that states Sunday’s referendum was illegal, though he called for a dialogue to be established.“Respect for the rule of law is not optional, it is fundamental,” said Timmermans, stressing that the matter is an internal one for Spain.

He added: ”It’s time to talk. To find a way out of the impasse, working within the constitutional order of Spain.”

3.36pm: Brussels says Catalonia is ‘abandoning the EU’The European Union has warned Catalonia that declaring independence would mean splitting from the bloc.A spokesperson for the European People’s Party said: “Someone needs to tell the Catalan people the truth.“If you contest the law to abandon Spain you also need to know that you abandon the EU.” 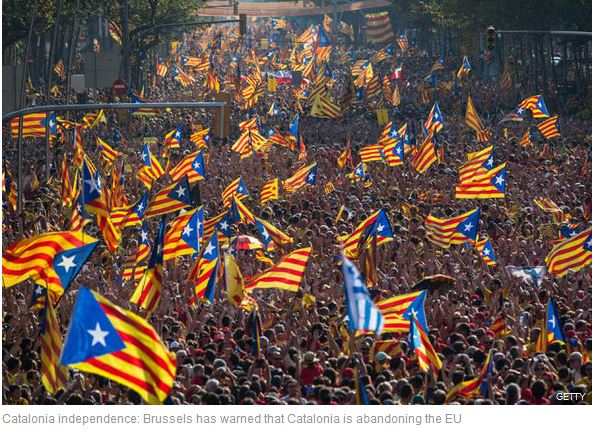 2.30pm: Catalan leader Puigdemont ‘already feels like president of a free country’Carles Puigdemont, the leader of Catalonia, told Germany’s Bild newspaper that he “already feels like the president of a free country where millions of people have made an important decision”.Sources have said that Mr Puigdemont will declare independence on Monday.Earlier, he told the BBC that the declaration would come “at the end of the week or early next week” after votes from abroad were counted.
2.00pm: Catalonia’s independence a question of how, not when, expert saysCatalonian leader Carles Puigdemont will almost certainly declare independence, Dr Ramon Pardo, a senior lecturer in international relations at King’s College London has told Express.co.uk.“I think the most important question is how is he going to word the declaration, because that is probably going to be more crucial than the declaration itself,” he said.“If he says ‘as of tomorrow Catalonia will be an independent state’, this will be seen as very confrontational to the Spanish Government.

“If he says ‘we are going to start a constitutional process that will lead to independence’, that is a more conciliatory tone because he is leaving the door open to negotiations.”

Either way, the declaration will not be valid under Spanish law, Dr Pardo explained. 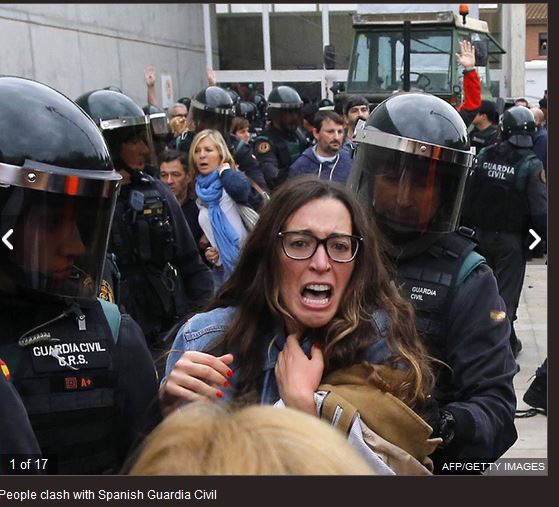 9.40am: Spanish bank clients ‘have nothing to fear’Spain’s Caixabank, Catalonia’s largest lender, and the country’s economy minister reassured bank customers that their deposits are secure from a growing crisis in the region.”Catalan banks are Spanish banks and European banks are solid and their clients have nothing to fear,” Luis de Guindos, Spain’s Economy Minister said after mass protests during a banned independence vote in the northeastern region.8.20am: Catalonia to declare independence “in a matter of days”

Catalonia will declare independence “in a matter of days”, the region’s secessionist leader Carles Puigdemont told the BBC.

Mr Puigdemont said that his government would defy Madrid and “act at the end of this week or the beginning of next”.

When what he would do if the Spanish government took control of Catalonia’s government, he said it would be “an error which changes everything”. 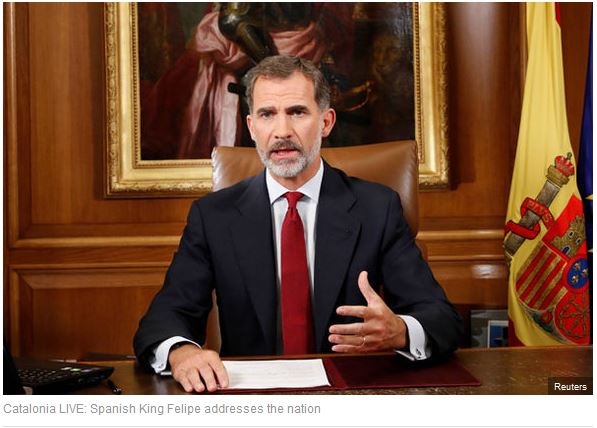 7.30am: Spain’s King rejects vote and slams Catalan authorities Spain’s King Felipe VI rejected the referendum result and accused Catalan secessionist leaders of shattering democratic principles and dividing Catalan society.In an unprecedented televised address to the nation, the king said the “irresponsible behaviour” of the Catalan leaders had undermined social harmony in the region.”Today Catalan society is fractured and in conflict,” he said.

“They (the Catalan leaders) have infringed the system of legally approved rules with their decisions, showing an unacceptable disloyalty towards the powers of the state.”

He added said: “For a long time some entities in Catalonia have not followed the constitution or the law of this country which sets out the way this country is governed.

“This has shown a lack of loyalty to the Government of this country.” 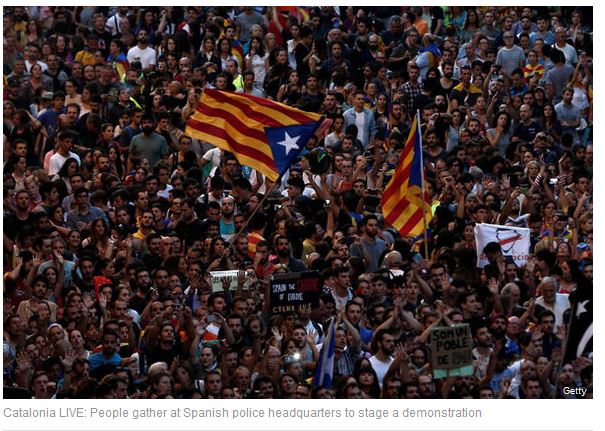 Wednesday October 47.34pm: Spain refuses third party mediatorThe Spanish Government has dismissed calls for a mediator between Madrid and Catalonia.Speaking to Politico, Spain’s European Affairs Minister Jorge Toledo said: “You can change the law, you can oppose it, but you cannot disobey it.”

The Catalan Government has said to does not want a “traumatic break” from Spain.

President of Catalonia, Carles Puigdemont said: “There is no button to push for independence, it does not exist.

“It is not a domestic matter. It’s obvious that we need mediation.

6.30pm: King of Spain to address nation amid Catalonia turmoil

King Felipe will make a televised public address to the people of Spain, after thousands of angry Catalonians marched through the streets to protest police violence during their independence referendum.

A spokesperson for the Spanish royal family told CNN that the statement will be made at 9am local time on Wednesday October 4. 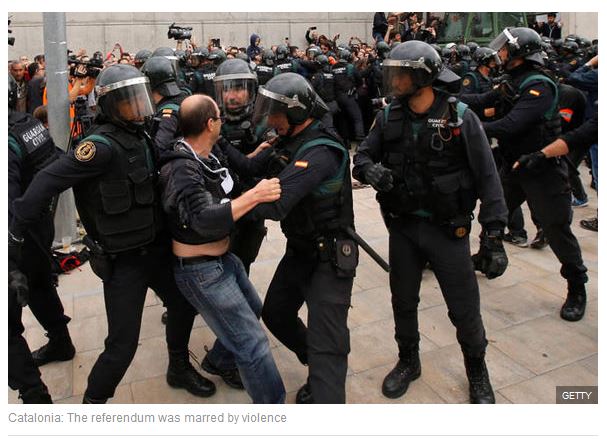 5.40pm: Protesters chant ‘Independence!’ and ‘The streets will always be ours!’To the north of Barcelona, a line of tractors moved down a road blocked to traffic, accompanied by protesters chanting “Independence!” and “The streets will always be ours!”Crowds gathered outside the local headquarters of Spain’s ruling People’s Party (PP) and the Spanish national police headquarters in Barcelona, whistling and waving the red-and-yellow regional flag.”In no way can we accept that they come here with this kind of repression,” taxi driver Alejandro Torralbo, standing outside the PP headquarters, said of Sunday’s police action.

Pro-separatist Catalans took to the streets of Catalonia today to protest against Sunday’s violent crackdown by Spanish police.

One protester, Monica Ventinc, said: “What happened on Oct 1 has fired up independence feeling that will never die.” 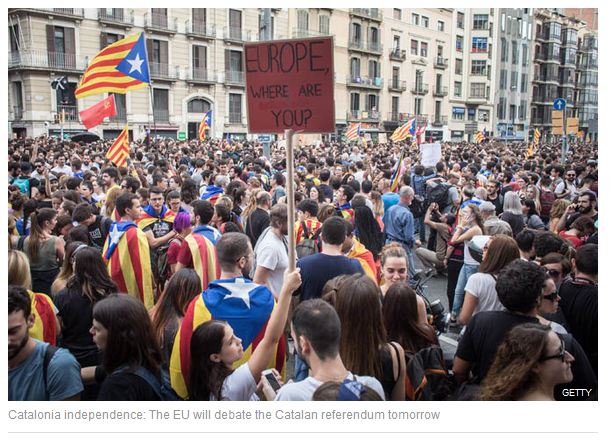 5pm: Spain’s Deputy Prime Minister Catalan government has ‘trampled’ on rightsSpain’s Deputy Prime Minister Soraya Saenz de Santamaria said Catalan President Carles Puigdemont and his regional government had lost respect for the democratic process and were showing a flagrant disregard for the law.”I’ve seen how President Puigdemont has flooded the streets with his followers to stop people obeying the law and to make them disrespect justice,” she said.

“We are here to defend the rights and liberties of all Spaniards that have been trampled upon by the regional government.”

She said: “The violent scenes witnessed on Sunday were shocking and unnecessary. This is a view shared amongst the international community.

“The Scottish Government are particularly disappointed by the response of the UK Government to the violent scenes.” 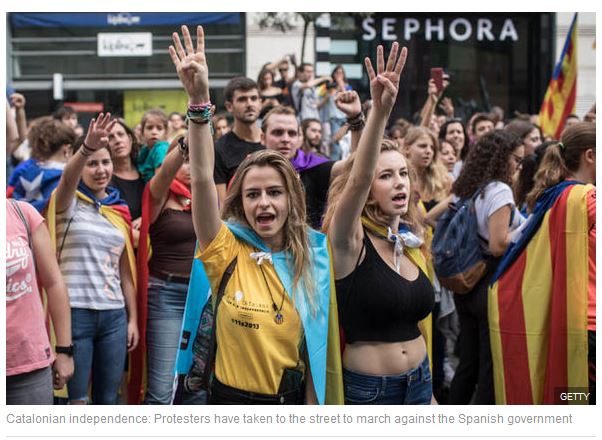 “The European Parliament will debate on constitution, rule of law and fundamental rights in Spain in light of the events in Catalonia.”

Barcelona president Josep Maria Bartomeu said the club would have to choose which football league to compete in if Catalonia gains independence from Spain.

He said: “This situation does not exist so far. But with regards to things that can happen in the future, it is something that the board of directors would discuss.

“It would be something to analyse calmly.”

The football club said it would be taking part in strikes today by closing its headquarters and cancelling training for professional and youth teams.

The Catalan club played in front of empty stands at the Nou Camp on Sunday as the independence referendum polling descended into chaos outside.

“The EU will never say it made an error with the recognition of Kosovo, but that decision will backfire. The Pandora’s box was opened.” 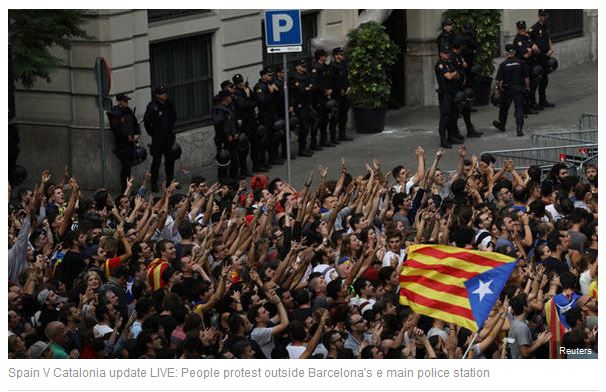 10am: Protesters go on strike in CataloniaBarcelona metro stations are closed and pickets are blocking main roads after civil servants walked out on Tuesday in response to a strike called by pro-independence groups.The stoppages, originally billed as a region-wide general strike but disavowed by the country’s largest unions, affected the public sector, public transport and basic services.

Many services under the control of the Catalan government did see some stoppages, with public transport running at around 40 percent, according to reports, while port workers and civil servants also walked out.

Normally busy metro stations in Barcelona were deserted as services were cut back sharply, pickets blocked traffic on Gran Via street and traffic on six major highways in the region was disrupted by protests.

Elsewhere, the response to the strike call was patchy with some shops, supermarkets and cafes open and some closed. The Boqueria market in Barcelona was almost empty.

9.30am: Nigel Farage blasts EU for failing to speak out on Spanish police violence Nigel Farage said European citizens would be “stunned” that European Commission President Jean-Claude Juncker had not mentioned the ‘dramatic events’ in Spain.He said: “I’ve called the European Union undemocratic, I’ve called it antidemocratic, but never, ever in my fiercest criticisms here did I think we would see the police of a member state of the union injuring 900 people in an attempt to stop them going out to vote.”
Monday: Two trade unions refuse to take part in strike Spain’s two largest unions refused to take part in the general strike and also called for dialogue between the central government and Catalonia, criticising both the call for independence and the heavy-handed police tactics.“The UGT and the CCOO clearly state that we do not back this position or this political strategy. We are not calling a general strike for Oct. 3,” they said on Monday.

Pro-independence groups and trade unions in Catalonia called a general strike for Tuesday after referendum on Catalan independence from Spain which had been banned by the constitutional court. 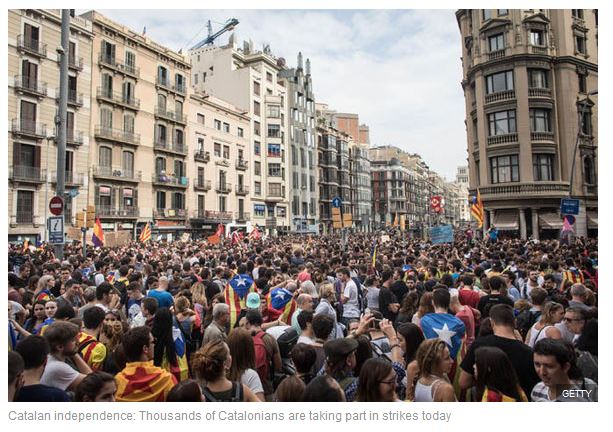 Scenes of armoured Spanish police swinging truncheons and firing rubber bullets at peaceful voters have been widely condemned, with the European Union calling for talks to break the stalemate between Madrid and Barcelona.Prime Minister Mariano Rajoy said the ballot had failed, while Catalan leader Carles Puigdemont vowed to continue with the independence process after millions voted to leave.

Some 900 people were injured on polling day when police fired rubber bullets and charged at crowds with truncheons to disrupt the vote.

Those who participated voted overwhelmingly for independence, a result that was expected since residents who favour remaining part of Spain mainly boycotted the vote.

Spain’s Constitutional Court prohibited the ballot, siding with Madrid which argued that it contravened the country’s 1978 constitution which bars breaking up the country.