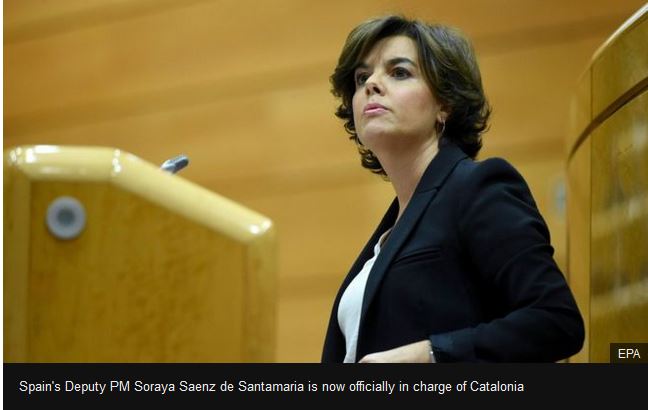 The Spanish government has stripped Catalonia of its autonomy and taken charge of its government.

The measures came early on Saturday after the Catalan parliament voted to declare independence on Friday.

Catalan leader Carles Puigdemont has called for “democratic opposition” to the takeover.

He made the call in a TV address broadcast from an undisclosed location.

On Friday, PM Mariano Rajoy announced the dissolution of the regional parliament and the removal of the Catalan leader, and called snap local elections.

Demonstrations for and against independence went on into the night. A large rally “for the unity of Spain and the constitution” is being held in Madrid.

The crisis began when Catalan leaders held an independence referendum, defying a ruling by the Constitutional Court which had declared it illegal.

The Catalan government said that of the 43% of potential voters who took part, 90% were in favour of independence. Others boycotted the vote after the court ruling.

What are the latest developments?

On Friday afternoon, the Catalan regional parliament voted to declare independence from Spain.

It did so early on Saturday by publishing an official bulletin (in Spanish) that dismissed Mr Puigdemont and all government members.

Mr Trapero was already under investigation for sedition, accused of failing to help Spain’s Guardia Civil police tackle thousands of pro-independence protesters in Barcelona during the run-up to the referendum.

He was replaced by Ferran López, his deputy. Pere Soler i Campins, director general of the Mossos, was also dismissed. 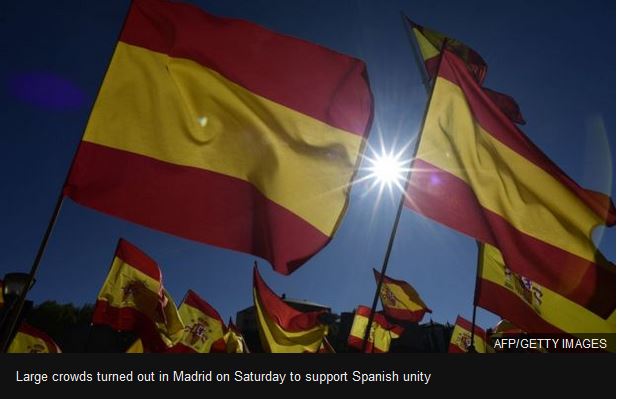 The BBC’s Sarah Rainsford, in Madrid, said that implementing the changes is likely to be a complex process for Spanish authorities – and one bound to be met with stiff resistance from those who just voted for independence.

Regional elections are scheduled for 21 December.

Mr Puigdemont has urged supporters to “maintain the momentum” in a peaceful manner, but Spanish prosecutors say they will file charges of “rebellion” against him next week.

Separatists say the independence move means they no longer fall under Spanish jurisdiction.

But the Spanish Constitutional Court is likely to declare it illegal, while the EU, the US, the UK, Germany and France all expressed support for Spanish unity.

What powers did Catalonia have?

Before Madrid took over the Catalan government, the region had one of the greatest levels of self-government in Spain.

It has its own parliament, police force and public broadcaster, as well as a government and president, though those have now been dismissed.

Catalans had a range of powers in many policy areas from culture and environment to communications, transportation, commerce and public safety.

Foreign affairs, the armed forces and fiscal policy were always the sole responsibility of the Spanish government.

What’s the reaction been?

Thousands celebrated the declaration of independence on the streets of Barcelona, Catalonia’s regional capital.

The same crowds that cheered each Yes vote from Catalan MPs reportedly booed Mr Rajoy as he made his announcement.

There were pro-unity demonstrations too, with protesters in Barcelona waving Spanish flags and denouncing Catalan independence. A large pro-unity rally is expected in Madrid on Saturday.

How did we get here?

After the 1 October referendum, Mr Puigdemont signed a declaration of independence but delayed implementation to allow talks with the Spanish government.

He ignored warnings by the Madrid government to cancel the move, prompting Mr Rajoy to first announce his plans to remove Catalan leaders and impose direct rule.

Catalonia is one of Spain’s richest, most distinctive regions, with a high degree of autonomy.

Many Catalans feel they pay more to Madrid than they get back, and there are historical grievances, too, in particular Catalonia’s treatment under the dictatorship of General Franco. But Catalans have been divided on the question of independence. 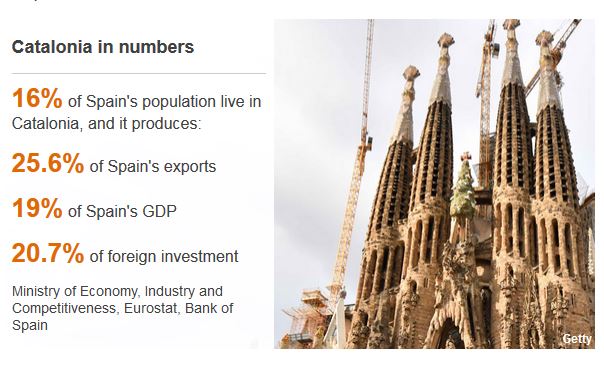