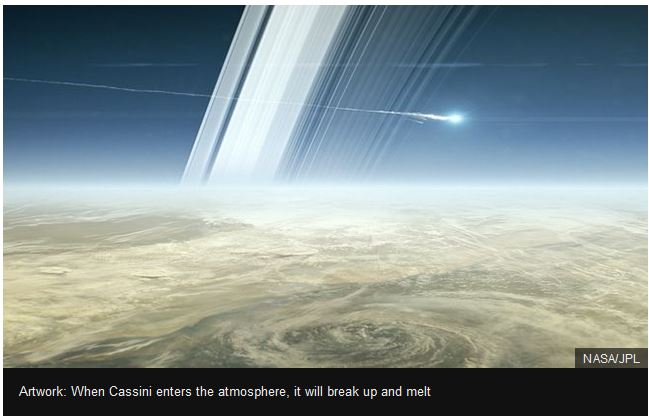 The international Cassini probe at Saturn will execute the course correction on Monday that will put it on a path to destruction.

The spacecraft is set to fly close to the giant moon Titan – an encounter that will bend its trajectory just enough to send it into the atmosphere of the ringed planet on Friday.

Once the orbit has been tweaked, nothing can stop the death plunge.

Cassini will be torn to pieces within seconds of entering Saturn’s gases.

“That final flyby of Titan will put Cassini on an impacting trajectory and there is absolutely no coming out of it,” said Earl Maize, the Cassini programme manager at the US space agency (Nasa). 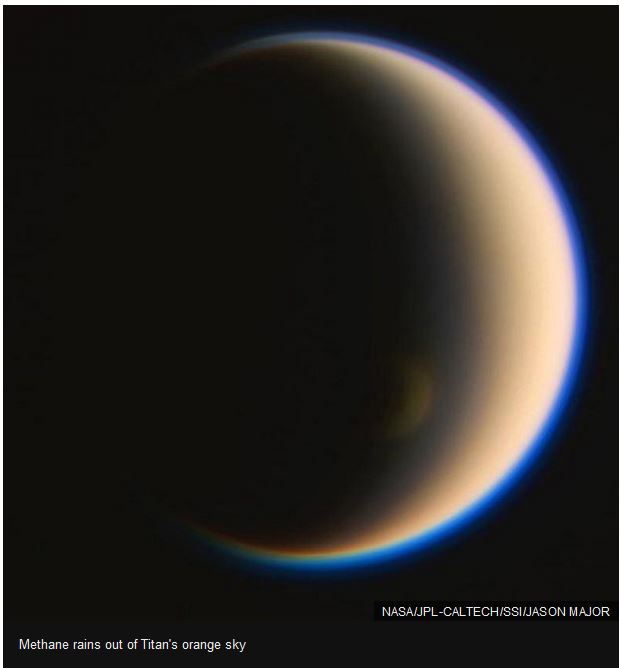 “We’re going to go so deep into the atmosphere the spacecraft doesn’t have a chance of coming out.”

Ever since it arrived at Saturn 13 years ago, the probe has used the gravity of Titan – the second biggest moon in the Solar System – to slingshot itself into different positions from which to study the planet and its stunning rings.

It has been a smart strategy because Cassini would otherwise have had to fire up its propulsion system and drain its fuel reserves every time it wanted to make a big change in direction.

As it is, those propellants are almost exhausted and Nasa is determined the spacecraft will not be permitted to just drift around Saturn uncontrolled; it must be disposed of properly and fully.

The agency is calling this next Titan encounter the “final kiss goodbye”.

As the probe passes Titan, it will take one last set of images of this extraordinary world where orange skies produce liquid methane rains that run into huge seas, and where the vast dunes on the moon’s surface are made from a plastic-like sand. 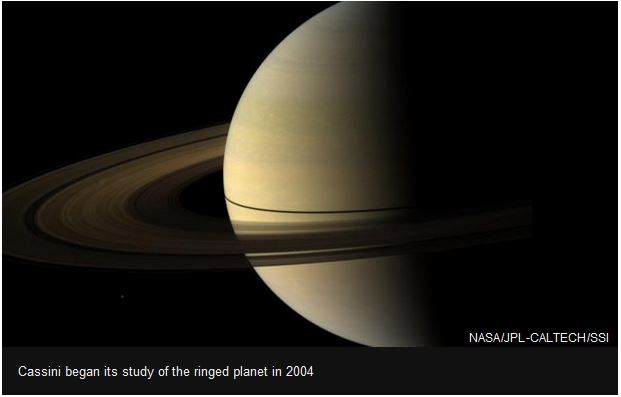 Cassini scientist Michelle Dougherty from Imperial College London, UK, says there is an effort in these final days to squeeze out every last scientific observation.

“The fact that we’ve got as far as we have, so close to the end of mission, is spectacular. We’re almost there and it’s going to be really sad watching it happen.”

Besides Titan, scientists want to take a few more pictures of the rings and the moon Enceladus, before then configuring the spacecraft for its scuttling.

The idea is to use only those instruments at the end that can sense Saturn’s near-space environment, such as its magnetic field, or can sample the composition of its gases.

In the final three hours or so before impact on Friday all data acquired by the spacecraft will be relayed straight to Earth, bypassing the onboard solid state memory.

Contact with the probe after it has entered the atmosphere will last just seconds.

“The Cassini mission has taught us so very much, and to me personally I find great comfort from the fact that Cassini will continue teaching us right up to the very last seconds,” said Curt Niebur, the Cassini programme scientist at Nasa Headquarters in Washington, DC. 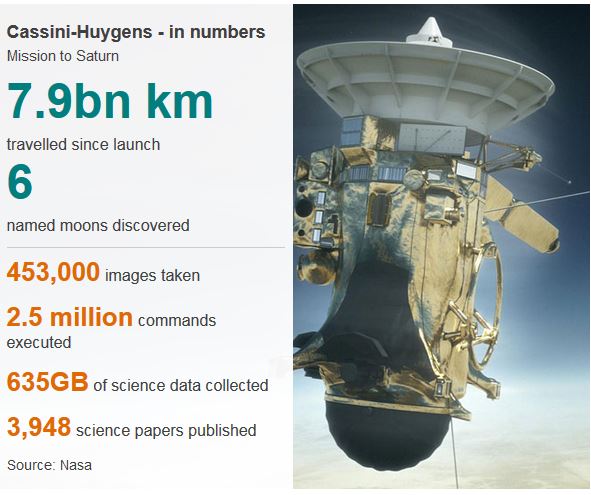 Cassini is a joint endeavour between Nasa, and the European and Italian space agencies.

BBC News will have live coverage of the ending of the mission on both TV and radio. Inside Science will preview the climax this Thursday at 16:30 BST on Radio 4 . A special Horizon documentary will review the mission and the final hours on Monday 20 September at 21:00 BST on BBC Two.

1 Comment to “ Cassini: Saturn probe to set up death plunge”