Some Thoughts on the Forward Movement of Uranus

As I’m sure many of you already know, the planet Uranus was stationary/direct on the afternoon of January 2nd UT. It turned direct after being retrograde for six months.

Typically, during a retrograde, people go back to the drawing board to rethink intended changes. To be revised, projects need to be temporarily halted.

Uranus drives the forces and processes of change. While Uranus is retrograde, which it has been since August 3rd, 2017, significant changes of all kinds skidded to a halt and have essentially been on hold until January 2nd.

For awhile, change unfolded so fast, most of us were relieved when all the change stopped. Beyond that, we didn’t so much think that change had stopped as that things had returned to normal. For a long time there had been so much change and such rapid change, it seemed more like chaos, than change as such.

So when Uranus turned direct on January 2nd, our experience was not so much that change had begun again, as that the craziness had returned. The chaos was back. But the reality is that, whether we realize it or not, a lot of things have been hanging fire.

Now, suddenly, a lot of things we did not realize had stopped are suddenly and quickly moving forward again. The energy of Uranus, though, is the kind that gets directly into our nervous systems.

This would be especially true when Uranus is stationary/direct during a full Moon, as it was this time. This Full Moon was a supermoon.

In fact, the Uranus Station happened during one of January’s two supermoons. The second supermoon, coming at the end of the month, is also a total eclipse of the Full Moon.

My point is that in the last couple of days, the energy got more intense and significantly wilder. Uranus is by nature a wild, uncontrollable, unpredictable energy. The energy of the two supermoons and the full Moon eclipse will compound the energy of Uranus Stationary/Direct.

So if your day, or your night, has included some unmanageable energies and some surprising events. It’s because of all this wild energy – Stationary/Direct Uranus in the midst of two supermoons, the second of which, as noted, will be a total lunar eclipse.

So if stuff is happening in your life – too much stuff, unexpected, high energy stuff – think of Uranus turning direct in the midst of a complex and rapidly shifting astrological situation . And aside from the quirky, tricky stuff, expect high profile programs and policies that have been on hold to begin moving forward.

The quirky, almost accidental stuff could easily distract us from the fact that, after long delays, new policies are finally going into effect, new programs are finally being implemented. In many areas of our lives, delays are coming to an end.

A lot of other big energies are shifting or preparing for a shift, also. And these deep, powerful pending shifts are contributing to the Saturn has entered Capricorn. Uranus is preparing for its move into Taurus. Longer term, Pluto and Saturn are inching toward Aquarius.

Finally, I am including a chart for the the moment of Uranus’s station. I used the “lines to all objects” option. And what we see is a Kite immersed in squares – in blocking and challenging, radically incompatible energies.

What we see is an astrological structure called a Kite. It is shaping, forming, and channeling disparate, incompatible, challenging, blocking energies toward a single, new, unified, integrated purpose, the strenuous, arduous creation of a new starting point.

After a difficult climb we will arrive at a new, higher plateau where new things are possible for us. But there will also be the excitement, the stimulation of knowing that even bigger energetic shifts are in the works.

We’ll be riding a crest of energy, but this crest will be riding atop another, larger crest. And there are more crests building beneath that one. We’re talking about crests upon crests, surges upon surges, transitions within transitions. Surprises within surprises. None of them as yet apparent.
Uranus Stationary/Direct, January 2 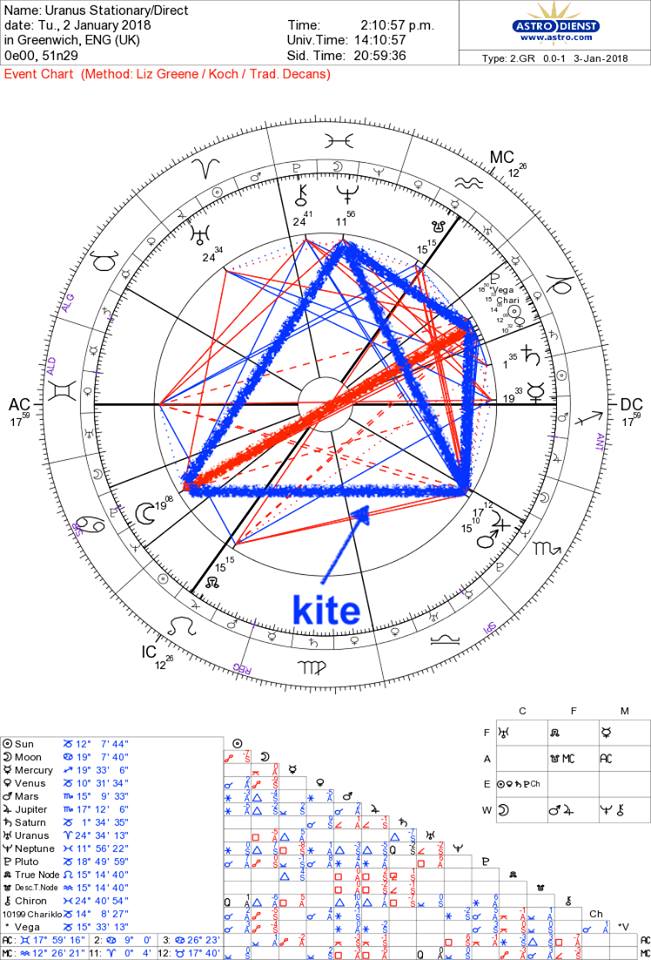