Carl Boudreau: An October Surprise, or, A Very Surprising October

An October Surprise, or, A Very Surprising October

October marks an important threshold in the energy shift now occurring. I provided detailed information about this shift in September’s astrology status @ http://on.fb.me/1qLlxfw. Or on my special astrology post page somewhere.

The first phase of the Pluto Capricorn transit, which began in 2008 demolished defective political and economic structures. This transit appears to have entered a second phase.

In this phase, the emphasis appears to be on destruction and release of flawed psychological patterns. Specifically, the elimination of those patterns that supported, or were supported by, those deeply flawed political and economic structures.

We had become used to an energetic dynamic that indulges these false patterns. The consequences were mild, or they played out in slow motion. This was true even as Pluto demolished so many seriously flawed political and economic institutions.

We are now entering an energetic environment that is unusually intolerant of lies, self-deception and self-serving illusions. It is also hostile to buried secrets and defective psychological and behavioral patterning and the defective behavior that goes along with them.

This new energetic environment will quickly reveal flawed patterns for what they are and expose their secret, hidden foundations within us. The penalty for perpetuating these flawed patterns and for continuing to act on them will be increasingly swift and, in some cases, rather harsh.

October will intensify this new dynamic. Everyone, high and low, on all sides of all the issues, will feel the pressure to play it straight. Over time, this, in turn, will have a leavening, moderating, corrective effect on personal as well as global economic and political affairs. A lot of bad actors will reconsider their questionable plans and expectations.

Clash of the Higher and Lower Selves

Several oppositions to Uranus are interspersed with two eclipses during the period under discussion. I includee some data from September to round out the energetic picture.

When Mercury opposed retrograde Uranus (09/13), the energies of the lower mind clashed with the energies of the higher mind. Both battled for control of our being. This caused another round of difficult and often painful emotional purging and life turmoil. Some of this would have spilled over into adverse psychosomatic events and unfortunate or objectionable behavior.

The already major inflow of energy at the equinox is dramatically augmented by Pluto’s station. The Pluto station will produce a prolonged and concentrated stream of pure Pluto energy. Nothing to be trifled with.

The Moon Pluto trine, exact earlier in the day, will help channel all of this energy into the battle between our lower and higher selves. It will push things in a sharply spiritual evolutionary direction with a rare degree of power.

Expect more of the mental and emotional turmoil that has characterized the last several months, especially. Expect the emergence of difficult emotions from the dark places where we buried them.

Venus’s opposition to retrograde Uranus (10/11) will expose our personal and social ties to the energies of Uranus and our higher self.

This series of oppositions to retrograde exposes each facet of our personality to the full force of Uranus. The retrograde motion will focus the effects all the more strongly at the unconscious psychological level.

This, in turn, will set off a cascade – a chain reaction – of profound spiritual and psychological changes. Our entire inner and outer identity would have been powerfully affected by the transformative powers of Uranus. And these will have dramatic knock on effects in the real world at all levels.

Meanwhile, the two eclipses in October will create an unbridgeable gap between the person we used to be and the person we are becoming. Between the world we lived in and the world we will live in. The almost unavoidable outcome of so much activity in the fourth house must certainly be very profound and utterly irreversible psychological changes – on a global scale.

Both of October’s eclipses take place in the fourth house. (Using UT and Greenwich, UK as the birth place.)

The fourth house is the house of our deepest psychology. It is the Moon’s natural house. It is also the threshold between soul and personality. It is the place where Spirit meets the unconscious and conscious minds, where they communicate with and affect each other.

The oppositions to retrograde Uranus tell us that these psychological and spiritual changes will be unusually deep and lasting. They will most assuredly mark a point of no return.

0º of a sign, especially a cardinal sign, is considered a high energy point. The four main angles of the chart – Ascendant, Imum Coeli, Descendant and Midpoint are considered very sensitive points in the chart. What happens at these points strongly affects the totality of a chart.

In October’s composite chart, each of the major angles is conjoined by 0º of a cardinal sign. Hence, in addition to everything else going on, this chart will be supercharged with high energy – the energy of brilliant new beginnings.

The result will be a kind of jump start on the future. The train of the past will be separated from the engine of the future, which will then accelerate rapidly.

All of us will be asked to break down and release some very deeply embedded pattern before we can move forward. Meanwhile, two eclipses will intervene.

Eclipses mark the boundary between both energetic and karmic phases. They mark an energetic threshold, as you know.

They also mark a karmic threshold. After an eclipse, we pay a much higher price and face far greater resistance for behavior based on bad patterns than we did before the eclipse.

Given the sheer quantity of the spiritual evolutionary power being released now, the penalty exacted for continuing flawed behavior patterns will be unusually serious. And swift.

Eclipses are meant to be inflection points. An unusual amount of power was released at the equinox. October’s chart is also a surprisingly powerful chart. And the whole setup has a clearly spiritual evolutionary look to it. 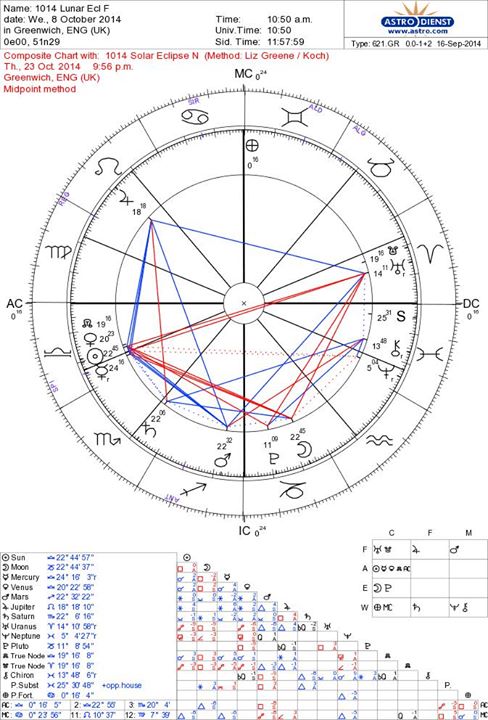