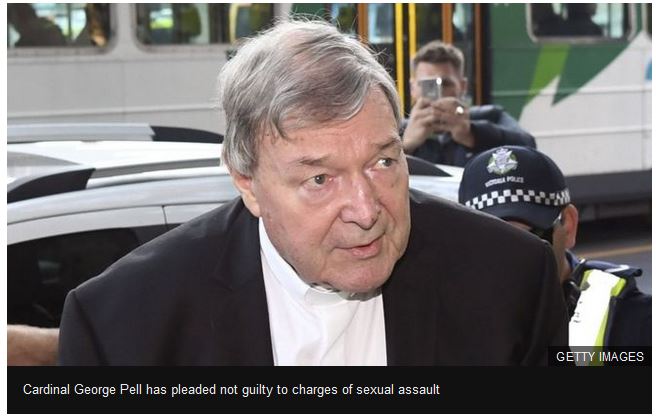 Cardinal Pell formally pleaded not guilty to the charges on Tuesday. He has consistently denied any wrongdoing.

An Australian magistrate ruled on Tuesday that there was enough evidence for the case to proceed to a trial on some charges, but not on others.

Cardinal Pell, 76, is Australia’s most senior Catholic and one of the most powerful officials in the Vatican.

He was given a large police guard as he entered the Melbourne Magistrates’ Court in front of dozens of media representatives and members of the public.

Cardinal Pell, who is considered the Church’s third-ranked official, took a leave of absence from the Vatican last year to fight the charges in his home country.

Most of the evidence given remains confidential.

But following the hearing on Tuesday, his lawyer, Robert Richter QC, argued that the most “vile” allegations against his client had been dismissed.

What is known about the allegations?

Last June, police in the state of Victoria charged the senior cleric with what they described as historical charges involving “multiple complainants”.

More than 30 witnesses testified during a preliminary court hearing, known as a committal, that ran for four weeks from March. Many sessions were closed to the public, which is standard practice in Victoria in sexual offence cases. 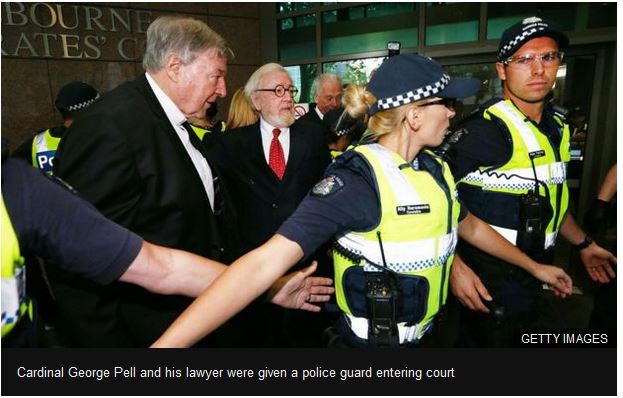 In open hearings, the court heard that an alleged incident took place at a Melbourne cathedral in the 1990s when the cleric was archbishop of Melbourne.

Another allegation related to a swimming pool in the city of Ballarat in the 1970s, when Cardinal Pell was a local priest, the court heard.

What does Cardinal Pell say?

The cleric has consistently denied all accusations, saying last year: “I am innocent of these charges, they are false. The whole idea of sexual abuse is abhorrent to me.”

Cardinal Pell’s lawyer, Robert Richter QC, told a previous hearing that the allegations were “impossible”, describing the complainants as “unreliable”.

He argued that Cardinal Pell had been targeted by accusers because of his role as Australia’s most senior Catholic figure, and that his client had fully co-operated with police.

What happened on Tuesday?

Magistrate Belinda Wallington said about half of the charges had sufficient evidence to be put to a trial.

An allegation that Cardinal Pell committed a sexual assault in a Ballarat cinema during a screening of Close Encounters of The Third Kind was among the charges that were dismissed.

In explaining that decision, Magistrate Wallington cited inconsistencies between the evidence of the accused and other witnesses, as well as timelines of when the film was screening.

“The evidence as a whole is not a sufficient weight for a jury to convict,” she said.

For over an hour, Cardinal Pell listened studiously, arms folded, as all of allegations against him were described in detail.

Surrounded by supporters in the front row, he didn’t react when the magistrate announced that half of the charges were to be dismissed.

When he entered his plea, Cardinal Pell remained seated but spoke in a loud, defiant voice with two words: “Not guilty.”

And with that, it was clear that the cardinal will now face a trial before a jury.

His appearances so far have seen dozens of cameras trail his every move in and out of court. When a trial does finally take place, the scrutiny is likely to be even more intense.

What will happen now?

Cardinal Pell’s trial will be held before a judge and a 12-person jury in the County Court of Victoria.

The court will hold an administrative hearing on Wednesday, but the trial is not expected to begin for several months.

On Tuesday, the Archbishop of Melbourne, Denis Hart, said he had “confidence in the judicial system in Australia and said that justice must now take its course”.