Cardinal Pell and the fall of the Vatican

Cardinal Pell and the fall of the Vatican 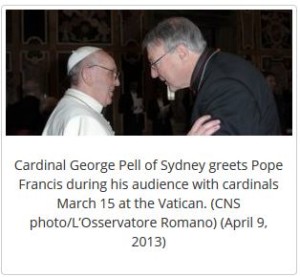 When the ex-Holy Office becomes the scene for the ultimate gay sex-drug scandal, and Cardinal Pell, who is in charge of the Vatican finances, becomes the most senior Catholic Church cleric in the world, to face accusations of pedophilia two days later, forcing him to go back to his native Australia, you know the state of the Church is not good. Actually, it hasn’t been this bad since the Borgias and Medieval times, and in all this is hidden an even bigger scandal, the possible bankruptcy of many Vatican business ventures. Things started to crumble at the end of June, after the unexpected resignation of the Vatican’s auditor-general, Libero Milone, who had an autonomous role in Pell’s office, and was appointed two years ago for a five-year term, after an executive search to audit the City States financial dealings.

Of course, I respect the Catholic world, I was myself born in it, but it’s more evident each day that the Holy See is losing control of their façade, and the last glimpse of honor was lost with Cardinal Pell’s arrival in Rome in 2014, after he was appointed by Pope Francis to be the first Cardinal-prefect of the newly created Secretariat for the Economy. In this new role, Pell was responsible for the annual budget of the Holy See and the Vatican, a position that needed an easily blackmailable figure, like him .

No wonder the Vatican is now facing the biggest economic fall , partly due to the ill management of many of their businesses, but also because of the increasing compensation request from victims of pedophilia. This situation forces Pell back to his native Australia, where he even devised a scheme back in the 90’s, called the Melbourne Response, for his Catholic priest pedophile network, so they could all pay the victims a ridiculous amount, and continue molesting them at a cheap price. At least one of them ended up suicidal due to the lack of support from the Church, and ABC news stated on the 29th of June 2017, that compensation for victims was capped at $50,000, and the process was widely criticised as offering inadequate support to victims.

Strangely enough, when Pell arrived in Rome, Lord Christopher Patten, joined his team, the same guy the elite of the New World Order used to cover up the increasing pedophilia scandals in the BBC, who included the pedophile monster Jimmy Savile. Patten, who was Governor of the BBC Trust from 2011 to 2014, when he worked with Cardinal Pell. Just a coincidence? Of course not, the pedo ring that rules the world helps their own! However, for three years, the victims of Cardinal Pell, and a few journalist and writers including myself in the Italian edition of “Pope Francis: The Last Pope?”, have openly warned the Pontiff and the Vatican on the dark side of the Australian prelate, but despite this, Bergoglio appointed him his right arm for the economy, and a member of a Group of nine, known as C9, the most influential Cardinals of the Church.

Despite evidence that Cardinal George Pell was covering up for pedophilia in Australia, and was possibly involved himself, the Pope went forward with placing him in one of the most important and influential positions in the Church today, where he lived a lavish lifestyle in Rome, often creating problems for Bergoglio’s image, who refused all criticism towards him.

Cardinal Pell always acted above the law, and often provoked outrage, especially when he stated that the Catholic Church should be no more responsible for the abuse of children than a trucking company is for a driver who picks up and molests a woman while on the job. Remember this Cardinal was supposed to be at the time of this sad statement one of the most powerful men in the Vatican, charged with cleaning up corruption and fostering financial reform. Instead he went on outraging the survivors of sex abuse by the clergy, linking the Church to a trucking company that refuses to take responsibility for a driver who molested women. The Vatican and Pope Francis are out of touch, as the fall of the Vatican continues to unfold.

Leo Zagami is the author of Confessions of an Illuminati, Volume III: Espionage, Templars and Satanism in the Shadows of the Vatican