California keeps a secret list of criminal cops, but says you can’t have it

California keeps a secret list of criminal cops, but says you can’t have it

Their crimes ranged from shoplifting to embezzlement to murder. Some of them molested kids and downloaded child pornography. Others beat their wives, girlfriends or children.

The one thing they had in common: a badge.

Thousands of California law enforcement officers have been convicted of a crime in the past decade, according to records released by a public agency that sets standards for officers in the Golden State.

The revelations are alarming, but the state’s top cop says Californians don’t have a right to see them. In fact, Attorney General Xavier Becerra warned two Berkeley-based reporters that simply possessing this never-before-publicly-released list of convicted cops is a violation of the law. 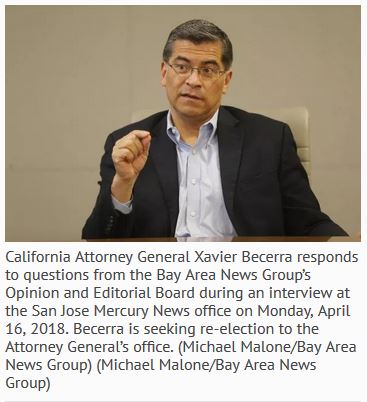 The California Commission on Peace Officer Standards and Training — known as POST — provided the information last month in response to routine Public Records Act requests from reporters for the Investigative Reporting Program at UC Berkeley and its production arm, Investigative Studios.

But when Becerra’s office learned about the disclosure, it threatened the reporters with legal action unless they destroyed the records, insisting they are confidential under state law and were released inadvertently. The two journalism organizations have rejected Becerra’s demands.

“It’s disheartening and ominous that the highest law enforcement officer in the state is threatening legal action over something the First Amendment makes clear can’t give rise to criminal action against a reporter,” said David Snyder, executive director of the First Amendment Coalition, a San Rafael-based nonprofit that advocates for free speech and open records.

The documents provide a rare glimpse at the volume of officer misconduct at a time of heightened interest over police accountability. The list includes cops who trafficked drugs, cops who stole money from their departments and even one who robbed a bank wearing a fake beard. Some sexually assaulted suspects. Others took bribes, filed false reports and committed perjury. A large number drove under the influence of drugs and alcohol — sometimes killing people on the road.

The Berkeley journalists chose not to publish the entire list until they could spend more time reporting to avoid misidentifying people among the nearly 12,000 names in the documents, said John Temple, director of the Investigative Reporting Program.

Still, the details are stunning in a state where officials have fought for years to keep virtually any record of police misconduct a secret. And they come amid a larger battle playing out in courtrooms throughout the state over California’s new police transparency law, Senate Bill 1421. Law enforcement groups have sued to limit the impact of that law, claiming it shouldn’t expose police disciplinary records created before the law took effect on Jan. 1.

Becerra himself has rejected public records requests from his own agency, and he is now being sued by a prominent First Amendment group for failing to comply. Many other agencies in California have followed the attorney general’s lead.

“Once you disclose a document that’s confidential and private, you can’t take it back,” Becerra told reporters earlier this month. ”You don’t get a second chance to get it right, you got to get it right the first time.”

While that law has garnered the most attention and a public fight over police disciplinary records, it was another law that took effect Jan. 1 that led to the disclosure of the convictions of thousands of law enforcement officers and applicants.

Tucked into a public safety omnibus bill last year was a provision allowing the state’s Commission on Peace Officer Standards and Training to keep information in its records showing when a current or former law enforcement officer is convicted of a felony or other crime that would disqualify them from being a cop.

Police departments often check POST’s records as part of the routine background check process when hiring new officers. But until the law changed, POST only labeled someone as being disqualified from serving in law enforcement when the person was convicted and had exhausted all appeals — which could take years and was difficult to track. The new law allows them to disqualify someone after a conviction, according to a POST spokesman.

So at the start of this year, Becerra’s office provided POST for the first time a list of what the agency says are convictions of current and former law enforcement officers and people who at one time had tried to become a cop.

POST provided 10 years’ worth of convictions — nearly 12,000 names in all — to the Berkeley-based investigative reporting organizations in early January in response to a public records request. Three weeks later the AG’s office sent a letter saying the records were “inadvertently” released and were considered confidential.

Attorney General Becerra’s office did not respond to multiple requests for comment.

Nic Marais, an attorney with Keker, Van Nest & Peters representing Investigative Studios, said the state’s assertions that the documents had been released “inadvertently” was hard to believe given that POST spent four weeks weighing the reporters’ request. In a letter to the AG, Marais wrote that because the documents appear to be a summary of public records, the disclosure exemptions cited by POST and Attorney General Becerra’s Office do not apply. Finally, he wrote that state law exempts reporters from prosecution for receiving records.

Snyder, of the First Amendment Coalition, argued the underlying records are in the public interest.

“Police officers are vested by the public with extraordinary power,” he said. “In order to monitor the use of that power, the public needs to know when they are over the line.”

But attorney Mike Rains, who represents police officers, questions why they should be singled out by such a list.

“To the extent the public wants that to be public record, I can understand that,” said Rains, who is leading a legal fight to block the release of officer disciplinary records under the new law.

“Why don’t we make that known for everybody?” Rains said of convictions, pointing out there’s no broad disclosure for lawyers, doctors, teachers and other trusted professionals.

Many of the indiscretions in the new documents released last month to the Berkeley investigative reporting organizations have never been revealed publicly until now. Some of the officers were fired from the force only after an arrest. Others remain on the job despite a criminal conviction.

About 3,500 names on the list appear to match the names of police officers in state personnel databases, and about 2,250 of those have been on the force within the last five years. But without more information, the exact breakdown of which individuals were in law enforcement as opposed to applicants to become an officer is still unclear.

Phil Caporale, a spokesman for POST, said his agency is using the list to check if active officers have committed crimes that should prevent them from working in law enforcement.

Get breaking news and alerts with our free mobile app. Get it from the Apple app store or the Google Play store.

“There’s that potential. That’s what we’re trying to eliminate … to make sure no one out there is a peace officer today who shouldn’t be,” Caporale said.

The agency also is on the lookout for former cops with convictions who try to get back into law enforcement, he said. “We want to make sure those folks don’t slip through the cracks.”

Greg Jeong is on the list. He was an Emeryville police officer for a few months but failed his field training program. So he went to work as a dispatcher for the department. In August 2017, Jeong claimed to be a cop in order to buy a gun and three high capacity magazines in San Jose, according to court records. He was ultimately convicted of impersonating a police officer. Jeong declined to comment for this story.

Hayward police officer Joshua Cannon also is on the list. In October 2010, Cannon was arrested for driving drunk in Alameda County with blood alcohol nearly twice the legal limit. A CHP officer clocked him going 92 mph, and when the officer tried to pull him over, Cannon quickly pulled off the highway and down a sidestreet, court records show.

Cannon eventually stopped and told the CHP officer that he was a cop and carrying an off-duty weapon. According to the CHP officer, Cannon “started asking me for a ‘break,’” the report said. “He also asked me that if I was in his situation what would I do.”

Cannon was convicted of misdemeanor driving under the influence — and remains on the force. He declined to comment for this story, citing department rules against talking to the media.

The list also included a new revelation about a San Francisco police sergeant who had been the subject of numerous media reports for use-of-force complaints and shootings.


In 2014, Sgt. John Haggett was accused of helping a girlfriend dig up dirt on tenants. Internal Affairs started investigating after one of them claimed Haggett’s girlfriend made a disturbing threat: “My boyfriend is a police officer and will take care of you.”

Haggett, who is now retired, pleaded guilty in 2015 to a misdemeanor for accessing the confidential information. He did not respond to an interview request.

The San Francisco Police Department did not respond to a request for comment.

Robert Lewis can be reached at lewis@investigativestudios.org and Jason Paladino can be reached at jpal@berkeley.edu. Jeremy Rue contributed research for this story. The Investigative Reporting Program is a professional newsroom and teaching institute at UC Berkeley. Investigative Studios is a nonprofit production company formally affiliated with the university.