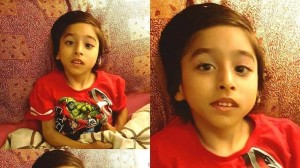 Go to this LINK to Help Chase

Chase Walker-Stevens is a 4 year old boy who suffers from a severe case of Cerebal Palsy after having a reaction to vaccinations within hours of his birth.

So upsetting they have taken Chase from his parents. He was getting well from Cannabis Oil and a plant based diet and his mother Cini Walker is considered a criminal for treating him naturally. She was arrested at John Hunter Hospital after Chase was medically kidnapped around 6pm on 19 May 2017. No one knows where Chase is. His father was locked in a public toilet by police while they wrestled Chase away from his mother. The doctors have cleared him saying he’s thriving but the FACS caseworkers had the authority to take Chase into their custody which they have just done as of last night. CHASE IS MISSING. NOONE KNOWS WHERE THIS BABY BOY IS!! I’m calling on anyone who is in the media who can share the truth about this story! Lady Cilento hospital in Brisbane has stuffed up! And they are trying to hide the damage that has been done by taking Chase away. They want to put him on heavy medication and food he is allergic to. This baby boy may die if fed synthetic foods and medications. WE WANT CHASE HOME WITH HIS PARENTS!!!
**PLEASE SHARE** **PLEASE SIGN**

This baby boy was underhandedly taken from a loving home where he was thriving to be placed alone with strangers and no way to communicate. He needs our help to be reunited with this parents Cini and Marc and his 2 sisters.

This petition will be delivered to:

Susan Brown started this petition with a single signature, and now has 80,017 supporters. Start a petition today to change something you care about.

This is outrageous! DoCs and FaCs should be directing their meagre resources (taxpayers money) toward children who are in REAL DANGER .. Chase has family who adore him. He was sent home to die and Cini and Marc have brought him back from the brink with the help of the loving cannabis community. He was in NO DANGER and this cruel and inhumane treatment belongs to the Dickens era – like your politics

Chase needs to be with his loving caring family . He will be so scared and not know what is going on .

7 Comments to “ Bring Chase Walker-Stevens Home To His Family”